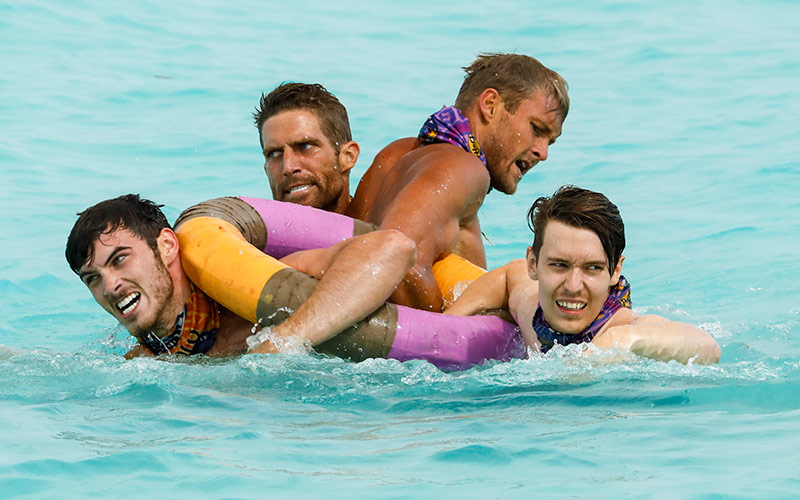 I’m going to start this recap by talking about someone who may not have been the focus of this episode, but about whom I’ve been thinking a lot. Here is what I will say to the credit of Angela Perkins: I would not want to cross her in any sort of physical challenge or in any kind of manipulation. In this episode, we see her in both situations and that is one tough lady. As much as I enjoy seeing tough moms on the island, her intimidation factor is increased by the fact that she is not playing this game to win, which is a hard person to work with. She is playing a game of loyalty, and when she views Survivor as akin to her time in the army, her definition of “family” is much more grave than when other players make comments about their Survivor family. She treats her tribe as she treated those who served with her, and therefore feels far more deeply betrayed when she is lied to. If Angela and Chris weren’t so deeply difficult to work with for their respective intensities and, honestly, total lack of warmth and charisma, this could have been the downfall of Wendell and Domenick, or at least one of the two. There is a world one can easily envision in which she and Chris are easily, or at least feasibly, able to join up with the old Malolos and flip everything against two power players who have already shown themselves willing to turn on their own in order to save themselves. I don’t mind this world. I like Wendell, but hate to see a loud mouth like Domenick loaded up with advantages so early with seemingly no one willing to vote him out. I would have liked to see this flip.

Laurel and the original Malolos can see this world too. Unfortunately, they just can’t commit to it. Why? Because Chris Noble is such a scuzzball that they simply don’t want to work with him. And who can blame them? He’s grody and uninviting. Anyway, Domenick shares his real idol, first with Wendell who is now his partner in crime by circumstance, and then he tells Laurel about it. I have complained before about using information to build trust with brand new allies, particularly that I think it’s usually stupid. I don’t know if this will necessarily hurt Domenick, but I think Laurel would have joined up with him anyway, and all this really does is reveal to her immediately that he has already lied to her. He didn’t just lie about not having an idol, he made up an entire scheme where he showed them the fake idol to prove that Chris lied and he didn’t have an idol. It was an elaborate lie. It’s not a great start to a relationship. This tribe won’t go to tribal this time so we’ll have to wait until next week, but I wouldn’t be surprised if this kind of revelation of extremely aggressive gameplay scares Laurel & co off from joining up with him after all.

A physical reward challenge ensues and Naviti wins PB&Js which make the most disgusting mouth sounds I have ever seen on a TV show that isn’t The Bachelor. Queen Kellyn, whom I have decided I would like to go on a bar crawl with because she seems honest and passionate and fun, is sent to Ghost Island via a rock draw. Because her original tribe is down 5-4, she decides not to wager her vote for a chance at an advantage. She gets very emotional over this decision, which makes sense because this is the kind of thing that you would want to base off of “which choice will I regret less if I end up going out because of this?” but it feels impossible to forecast that. It feels like an individual vs group decision; an advantage for herself vs the numbers for her alliance. However, in turning down the advantage she doesn’t have to look back. She knows that she’s done her best to keep the numbers on her side, and she’ll never know what the advantage was so she doesn’t have to live in regret of what it could have been. If she had taken the advantage and lost the numbers, the impact and the wonder could stay with her for the rest of her game, having much further-reaching effects. From my perspective, if you play a good enough game and keep the numbers, you don’t need any advantages. You don’t even need any immunity wins. I think Kellyn is correctly aware that she is a good enough player that she’s better off with a really solid social and strategic game than she is with any advantage. I’m rooting for her.

The immunity challenge is another diving challenge for my husband James to fail at. Fortunately, this one is more of a group effort, and after a difficult start for Naviti it comes down to throwing balls on top of what I can only describe as a thingy, gym teacher Brendan ruins Malolo’s lead by knocking over one of their already placed balls, and Naviti finally pulls it out.

The back half of this episode has warranted this extremely bold claim: This was one of my favorite episodes of Survivor since Millennials vs Gen X. The fact that the editors give us all the tell-tale signs of someone absolutely going home in Bradley: The invisibility/negativity from the previous episodes, the complaining, the arrogance, the kiss of death confessional in which he claims he’s excited to go to tribal, the scrappy underdogs coming up with a strategic plan to make it happen, and we’re all set for a predictable villain boot. Only it doesn’t happen. And the reason it’s great is because we understand why it doesn’t happen. Often, Survivor will pull the old switcharoo on us just for the sake of being unpredictable, but it leaves us scratching our heads as to why the person eliminated was even targeted in the first place, which totally undermines the impact of the unpredictability by displacing it with confusion and frustration. However, we totally get why this was Brendan. He’s in the minority alliance, and people in the majority have expressed that they think he would be an unpredictable boot since the other side would assume they were getting rid of a woman who would help them less in the challenges. I love that this majority alliance totally nails it with that, and sort of flips this sexist script on its head. Women are so often unfairly targeted for being “weak,” they exploit that predictability by targeting a muscley man instead. I love it.

Michael does his best to bluff that his James idol can actually save two people, but ultimately this is sort of a useless plan. I give him all the credit in the world for scaring the crap out of these people, and we know that fear can motivate people to act irrationally, but I’m not sure ultimately what he’s going for here. He’s asking the other side to flip and vote for Bradley with them, but what is the incentive for them to do so? If he plays the idol correctly, Bradley goes home anyway. If he doesn’t, it’s still one of them. It’s fun and dramatic but it’s sort of a “so what?” and that’s why I love that it doesn’t work. The ultimately hollow plan doesn’t land, and he misplays it, even with the advantage of at first saying he’s playing it for Brendan in an effort to gauge their reactions, which he completely fails at, and changes to Stephanie, falling right into their trap, and DILF King/Non-Jew Brendan Shapiro is bounced out. I will miss his abs, and I do feel bad for him. In a vacuum, I would have preferred him to stay over Bradley. But God, this was fabulous. All around excellent work by everyone. Michael and his allies did their best to fight their way out of a truly bad situation, while the majority alliance kept their heads cool in the face of something majorly frightening and made the logical decision. I was surprised and engaged and sorrowful and elated, which is all I want from Survivor, all the time, always.