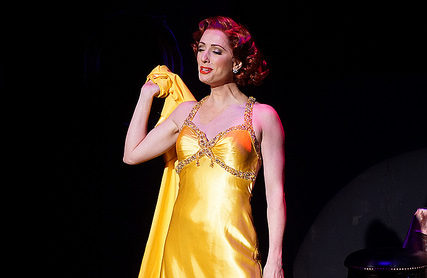 Anything Goes at Musicals Tonight!

With Broadway ticket prices being what they are, it’s easy to despair and give up on the prospect of seeing quality musical theatre in New York without giving up and arm and a leg. “Musicals Tonight!” attempts to ease that fear by providing quality productions (on 42nd Street no less, at the Lion Theatre) without the prohibitive cost.

Musicals Tonight! succeeds in delivering quality foremost with its ability to cast such talented performers. The cast of their newest production, Anything Goes!, is deep with talent and experience, and it shows. Particular kudos are warranted for Meredith Inglesby as Reno, Brian Ogilvie as Evelyn Oakley, and Blake Spellacy as Purser. All three actors perform with exceptional charisma and humor, and they share that rare ability to turn any mundane moment into one that is surprising and engaging. Each of them is that actor your eyes are drawn to no matter how much is going on, or how many people occupy the stage.

The production is well choreographed and full of top-notch dancers who are given moments to flaunt their athletic ability and technical expertise. It is an ambitious task to perform such a high level of choreography with that many people on a small stage, but the actors rise to the task.

The successes of the production go a long way to obscure the failing of Anything Goes! as a show. Anything Goes! feels like an ancestor to the current jukebox musical whereby a collection of songs are strung together with a plot that manufactures circumstances barely relatable enough to the music to give some illusion of integration. Anything Goes! is not a show where the music is needed to tell the story; it’s more like a collection of inanely entertaining musical comedy hijinks interrupting a Cole Porter review. The show hasn’t aged well in relation to its Chinese characters or its occasionally chauvinistic attitudes towards women, but this is a reflection of the mentality of 1930’s America more than the show.

Anything Goes! is not a show with much substance, but this production has got comedy, choreography, and Cole Porter all performed by a cast that does it so well that the actors make up for what the writing lacks.