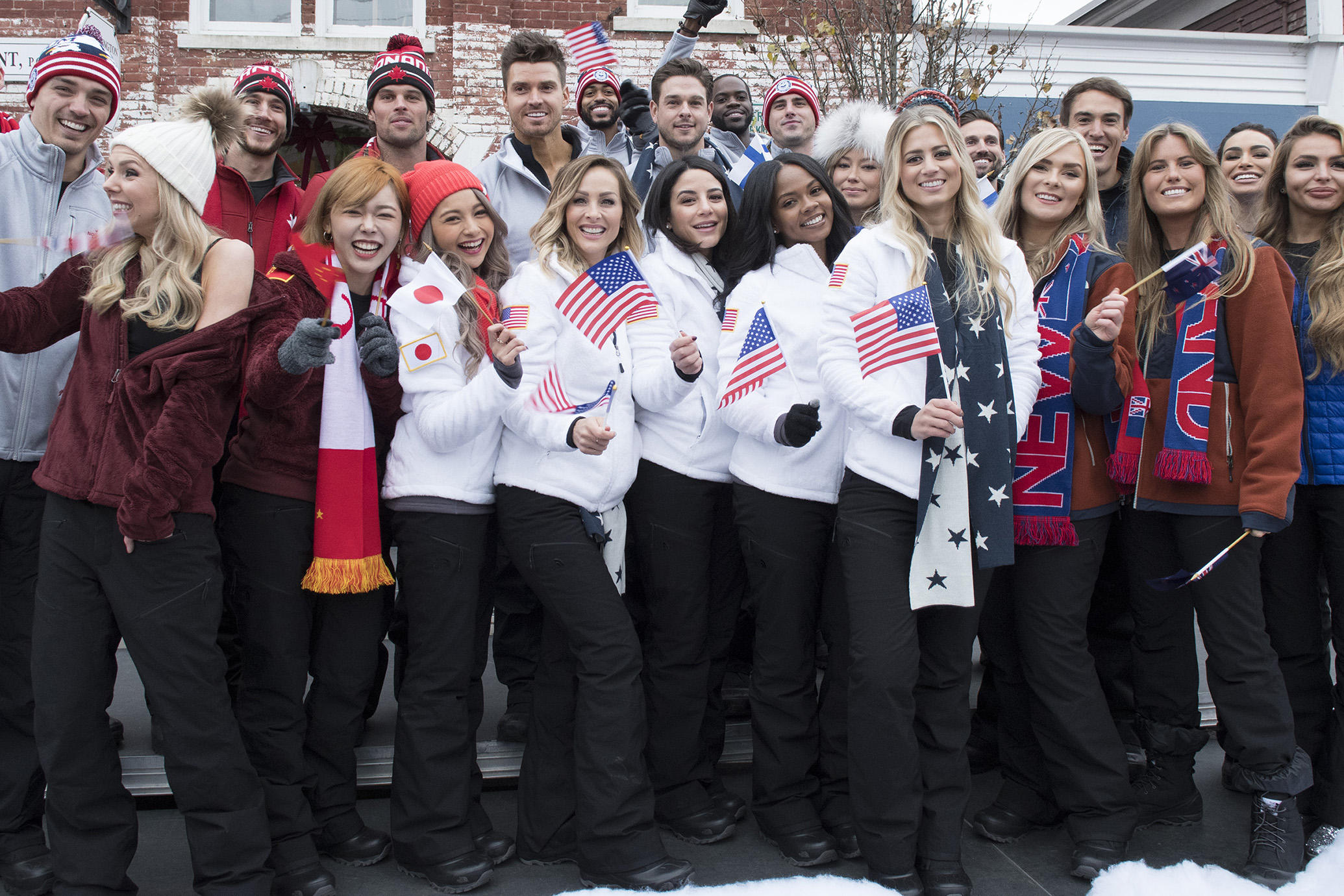 Winter Games For The Win

Last year, Ashley I(aconetti) won our  award for Outstanding Female Reality TV Star and, when she did, I wrote the following: “She’s a refreshingly frank, sneakily smart, consistently funny person who makes the audience feel like a friend and, in return, we just want her to be happy”.

In 2016, when he was on The Bachelorette Canada, I wrote the following about someone we were at the time calling “Kevin W” (like “Ashley S” before him, there was a “Kevin P” to contend with): “Kevin W is a really good dude. The other guys call him Captain Canada and clearly have a remarkable amount of collective respect for him (they don’t just like Kevin W like I’m sure everyone probably likes Mike, they almost seem to look up to him). He has this un-flashy way of standing his ground and seems to treat even the guys he doesn’t really “get” with kindness and consideration. I wouldn’t pick him for me but I’d recommend him to almost anyone else”.

The Bachelor Winter Games was not only my favourite piece of counter-Olympics programming this year (sorry, Celebrity Big Brother, you are also a surprising delight), I think it’s the best thing the Bachelor franchise has ever produced. Four 2-hour episodes over 2 weeks was the perfect dose (high intensity for maximum obsession, short commitment for minimum self-hatred) and whoever had the idea of bringing in international competitors deserves a major pay bonus. The internationals were perfectly selected (even the ones who didn’t get much traction felt like potential stars) and their presence eased the “this person again?!” frustration of the American stars so the producers could use their favourites for the third or fourth time without making the audience feel like there was nothing new to offer. Winter offered new fun fashion opportunities and the Olympic backdrop set up the perfect competition concepts so the show struck the self-aware-silliness tone that makes Bachelor in Paradise such a hit without having to also bring along that show’s “we’re skeezy and we know it” self-deprecation.

But the main reason it worked was something Ashley put her finger on in a recent episode of her podcast Almost Famous– which she co-hosts with Ben Higgins, the podcast being the great behind-the-scenes explainer of the completely wonderful and easy friendship that quickly became my favourite part of Winter Games. On the episode, Ben makes a point of saying he sees the Winter Games couples as more genuine and established than any he’d ever seen on the main show and Ashley brings up executive producer Bennett Graebner, saying that he really focused on finding connections rather than creating drama. As the central focus of much drama in her three previous appearances on Bachelor shows, Ashley knows from drama and you get the sense that she really does resent the impact that the producers’ drama-baiting has had on her. But the setup of Winter Games was as much of a genuine setup for success as I’ve ever seen on the show, especially for Ashley. They put all the contestants in the house at once so all the possibilities were actual possibilities, they went with a really big cast so there were actually lots of possibilities, and they resisted the urge to throw people in with their exes, which allowed them to actually move on and consider new relationships without carrying their baggage (ahem, Jared) around. The only super Bachelor-y stunt of the whole season was the idiotic kissing challenge that saw not only the couples judged externally for something they can only actually assess internally but also forced (in order of awkwardness) Luke, Dean, Josiah, and Bibiana to make out with a new person and be judged for it by someone they used to make out with (the judges were Jojo, Rachel and Arie). But that was really just a bullshit way of getting the number of couples whittled down because gone, too, was the truly maddening rose ceremony contrivance that encourages Bachelor in Paradise contestants to force relationships and lead each other on. They had to replace that drama-baiting concept with something, if a kissing contest is what we have to put up with, that’s fine.

In the end, we have four couples who seem on fairly steady ground. Are any of them a Jade & Tanner-style slam dunk? Absolutely not- I think Lesley should be wary of Dean’s commitment issues; Courtney & Lily are adorable and that post-show roadtrip definitely solidified things promisingly but their 10 year age difference that was literally never mentioned doesn’t fill me with confidence- but, considering Winter Games only gave them a week or so together, I’d say 4 is a pretty impressive number. (There was a fifth but they broke up immediately because apparently all-time-babe Luke is pretty disingenuous and all those swoony sweet speeches were completely made-for-TV; I will admit that he had me fooled and there’s a part of me that still hopes I wasn’t totally wrong about him, I guess I’m gullible).

Of course, one of the relationships that “lasted”, Clare & Benoit, is actually a Mesnick-style bait & switch that started and ended on the show then started again off the show when the dumper realized they never should have done the dumping, but it still counts. Canadian fans may be wary of Benoit’s established pattern of hasty over-zealous romance and be skeptical of that ring he so quickly pulled out at the post-show reunion but it’s impossible not to root for those two crazy kids and I’m absolutely here for any story that ends with “and then, realizing her own worth, she finally gave the nice guy who treats her well a chance, and she lived happily ever after”.

If there’s one thing I think we can all agree on on the subject of Bachelor Winter Games, it’s that #TeamCanada won. We didn’t even send out our top prospects (Kevin & Benoit were #6 & 7 on my Bachelor Scale) and we still came out on top in the categories of Overall Couplings, Engagements, Decent Taste in Women, Good Edits, and Actual Competition Wins.

Other winners include: 1) Ben, who reminded everyone (or at least me) that he’s so crazy wonderful and is absolutely being set up for another run as Bachelor as soon as he’s ready (Ashley adorably referred to her buddy as “the greatest Bachelor in history” at one point on Winter Games and she’s definitely at least in the ballpark of right so I am so fine with a second go). 2) Jordan, the New Zealand Bachelor who flipped a coin to pick his final girl and has been considered a notorious villain ever since but redeemed himself by displaying vulnerability, awesome taste in women, and an unexpected lack of competitive showmanship on Winter Games. And 3) Smart, Outspoken, Interesting Women! Seriously, this is the first time I can remember on any of these shows when the men seemed to disproportionately favour women who are actually interesting. Not “sweet and maybe smart but mostly incredibly gorgeous” women like Jade, Caila (😬) and the other usual BIP favourites, I’m talking about the complicated, loud, so-completely-themselves-it-stings women who totally dominated Winter Games– Clare, Bibiana, and- most famously, most notably, most triumphantly- Ashley.

In the finale of Bachelor Winter Games, Ashley Iaconetti says the following to the camera: “three years and gallons of tears later, I finally find what I was looking for. I’ve always felt like I would one day”. Famous for being the show’s only non-religious virgin, 29-year-old Ashley has been waiting for the right person. She’d previously been on three different versions of this show and had, to date, expressed serious romantic interest in exactly one person (she’d at least marginally considered two others- Chris Soules and Wells Adams, but neither interest was all that real). I always loved Ashley’s, pickiness is the wrong word, but the idea that she was looking for a spark that doesn’t happen all the time. I trust Ashley’s gut, I like that she’s so tuned into what it’s saying. Our instinct is to assume people who haven’t dated much are somehow cowardly or cautious but, if we learned anything from the Jared debacle, we learned that Ashley is clearly neither of those things. I think that gut of hers has kept her out of relationships that other girls would have spent a few months or even years in before realizing they were missing something. I don’t know how well Kevin does with emotional women (certainly when Jasmine cried, he froze) and distance is rarely a relationship’s friend, but everything I believe about instinct and connection and self-awareness tells me that Ashley’s got it right on this one and boy do I like seeing her happy. She wasn’t being picky (remember, she’s platonic best friends with the generally-agreed-upon biggest catch in franchise history, it wasn’t a matter of “good enough”) she was waiting for her gut and trusting herself and she did it in an environment that values the exact opposite. I love love love that girls all over North America just saw Ashley Iaconetti fall in love and be loved in return; hopefully they heard her when she said they deserve the same thing, you just gotta keep the faith: “I finally found what I was looking for. I’ve always felt like I would one day”.