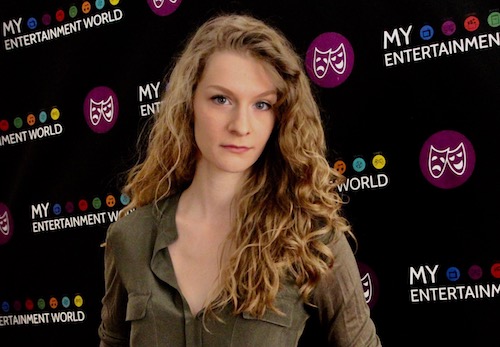 Everyone’s always in love with the soft spoken and deeply thoughtful Krystina Bojanowski. I first saw her play Juliet and, at the Toronto Fringe last summer, her character Clem in the enigmatic period piece Odd One Out was a strong, funny, vulnerable beauty whom the other characters couldn’t forget. It’s hard to blame them; her Outstanding Supporting Actress-nominated performance in that play was intelligent, ethereal, and utterly unforgettable.

Last time you did an interview for us, it was as part of the ensemble for Romeo and (Her) Juliet. You told us that the first show you were in was West Side Story. Do you remember the first time you went to the theatre?
Yes. It was Bard on the Beach, because I’m from Vancouver, and it was The Tempest. So it was outdoor, in-a-tent Tempest. I think Christopher Gaze was my Prospero.

And that inspired you to want to be a performer, or did that come later?
I think it was part of it. It was definitely magical. I came into performance through singing, actually, funnily enough. Singing in choirs, singing all the time, started off in school musicals and things, and Shakespeare came out of that.

I haven’t seen you in a musical, though. Do you do musicals anymore?
No, I went to theatre school and stopped.

So how did you get involved with Odd One Out?
It was just things lining up, because I actually went to theatre school with Maureen [Gualtieri]. We were in the same cohort, going through NTS. I’m trying to think of the actual steps, because it was actually just a whole bunch of collisions. Maureen had been writing this play for years, and was telling me about it. This love story between these two women, and how it was set in the 1950’s, and there were aliens, and I went “yes, more of that!” So it was actually going into production. She got a Fringe slot with a whole, completely different team, with two different lead actors and a different director. And I ended up in tap class with the designer, who’s this wicked Russian woman called Natalia [Tcherniak], who’s actually an architect. So she was telling me about the process, and another friend of mine, Jesse Byiers, was in it as the male already. So when the team fell apart, they were looking for someone else to come on board. And he suggested me. Both Natalia and Maureen, who were already on board, were like, “we know her! It’ll be great!”

What appealed to you about the character in the script?
Maureen writes women who are so funny. They’re so smart, and they’re so intelligent, and they’re allowed to be every facet of themselves. They’re not ideas. They’re complex in a way that’s sneaky, because often they’re very comedic and acerbic, but they’re often struggling with faith and their instincts, and then empirical knowledge or societal structures. This was even in her plays at school. So I read it and the character was so complex, and had so much heart. And does walk off into the woods and disappear at the end. Or the beginning. At some point in the timeline, she walks off into the forest and disappears, because she draws her boundaries. I’d say that was the largest draw. And they’re deeply strange. Her characters are deeply strange, in the best possible way.

Was that crazy timeline something that was hard to keep track of in terms of where your character was at in a mental space in any given scene?
It was okay for me because my character’s only in flashback in that show. Except for the beginning, which I knew myself was more of a supernatural astral projection, and I found ways to figure that out for myself. My dirty actor’s secret was that whenever I was not actually there within the logic of this scene, I’d have my shoes off. So it was more the alien version of Clem, which in our language was “deerlike”, because of the motifs in the piece, and the fact that, often in alien visitations- this is just going into the nerdy background- so people who have experienced what they think are abductions or alien visitations will often just block out the memories, but they will have a dream of animals. They might remember very acutely being watched by an owl, or a herd of deer. So the deer is actually how it manifests in this play.

So you share your character’s fascination with aliens?
I do now. It was mostly research I did. I read a bunch of books that Maureen was reading. I watched some of the documentaries, and also read the lesbian pulp literature that the initial idea’s actually based off of. There are so many different layers. There are aliens. There’s lesbian pulp fiction.

You’re also dealing with a period piece. Did you do much research into what life would have been like for her at the time?
Yes. The obscenity laws came into it in a large way. I think the main thing was the restriction. The lack of social mobility – even the fact that she’s a woman at university in the 1950’s is interesting given how I was imagining her family background and where she came from. It was a lot of research into the publishing laws between the 50’s and the 60’s, and the morality laws, and how that influenced way of life.

Also undergarments. I’m big on period structure undergarments, because it affects your posture, how you walk, and all that kind of stuff. And breathing. Where can I breathe, where can I not? How does it fit with the clothing that I’m wearing?

Did you go out and find and wear the appropriate things, or were you figuring out what they would have been like and then replicating what the breathing would be?
I ended up talking to Maureen about this. I went “listen, how restricted do you want? How much do you want me to play with this?” In a different form, in the version that we had, she went, “I think she wears pants.” So that means that the undergarments that I’d be wearing for that would be completely different than if I’m wearing a dress or a skirt, just because of garters and cut-offs. So our costume designer found an underbust, a bustier, and then she seamed that so that it was more bullet-pointed. And then I went to my favourite vintage lingerie store and bought some straight-up vintage 1950’s underwear.

Hardcore.
I love them so much. [laughs]

Everyone in the play is in love with your character in some way. How did you go about developing those different sets of chemistry, and differentiating the love stories?
With the character of Matt, played by Mattie Driscoll, conveniently – she’d respond to her name – was more a case of breath, and love at first sight, because I didn’t know her before the production. So really playing with that idea of having thoughts and choosing not to say them, because Clem is quite protective until the climactic moment in the forest where they do consummate their attraction. We did work with Siobhan Richardson on some intimacy choreography. One of the most useful exercises: we stood a couple of feet apart from each other, just breathed together, and then she ran us through imagining our life together. So she would go, “it’s the first time you’ve met each other. It’s on New Year’s. Feeling that body flush, what are you thinking about this person?” and then she would jump forward to a break-up, and to a reconciliation. I found the most striking [thing] for me was imagining us as old women together. Just a thing I touched into in the production. Sometimes I’d look at her and just think of that moment, and imagine us there. So that helps.

Had you worked with an intimacy director before?
No, not at all.

What was that experience like, and how did that affect your process overall?
Those exercises helped deepen the person-to-person connection. We also blocked the actual intimacy with her, which I found incredibly helpful because, again, I didn’t know Mattie super well. I didn’t know where I could touch her, and where I couldn’t. I mean, the obvious ones. Where she was comfortable with. And it was so helpful to have someone there with the framework to talk us through it, and give us permission to make the sounds – we actually got kicked out of a Catholic school at night. We needed an extra rehearsal space, and someone volunteered space at this school, and it was a Catholic all-girls school. So we were rehearsing in the drama room, and Siobhan was demonstrating some very loud orgasm noises, and then we had our go, and we left, and as we were leaving, there was a janitor who was giving us major stink-eye. And then it came down through the e-mail thread that someone had complained. There was no one else in the school. Those sounds are not allowed in that building.

What were some of the key conversations you had with Elizabeth Traicus, the director, in developing your interpretation of the character?
She gave me some pretty free reign. I’d come in with things. She’d go “sure, let’s try it”. We’d often talk through story beats. She would often talk through the challenges and the obstacles and the relationship with the male character. She really gave us free reign to figure out for ourselves, and brought in some wonderful people on the team to build that soundscape of when we were going into the supernatural realm.

What were some of the unique rewards and challenges of a Fringe run?
Oh, it was so fast and dirty. So exciting. I think the rewards – having the opportunity to be a part of the community in a festival atmosphere. People would go out and talk about the shows afterwards. I met some really incredible artists at the tent. Challenge-wise, it was a play that started off as a nine-character play, and then once it got into the Fringe, Maureen cut it down to three characters, so all the male characters got smashed into one, within an hour.

What were you hoping the audience would take away from the show?
That’s an excellent question. I hope that whenever anybody sees that play, or reads it, that they open themselves to compassion, and investing in love even though it’s fragile, and against the odds. And the complexity of it. Reading it, I just wanted the two women to get what they wanted and honour each other’s love, and of course it goes off the rails within the story. It’s so important to me that people find a way to be vulnerable, and courageous.

What are you doing now? What’s your next project?
I’m working on an edit of Twelfth Night. So I’m going to go home after this and keep transferring all that punctuation over, with Schitt’s Creek in the background [laughs].