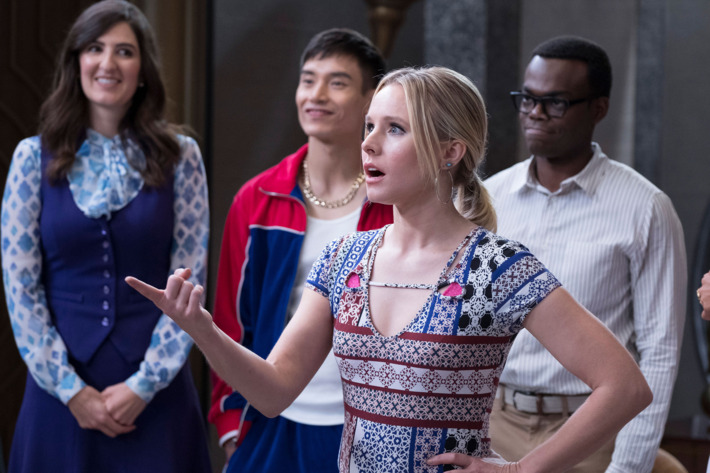 I actually just finished telling a friend that I don’t think recapping/reviewing/discussing The Good Place in any kind of semi-formal forum is all that useful. My argument was that, with very few exceptions, it’s most likely that you’re not nearly as smart as the show and its creators so, especially right now, in the immediate aftermath of a second season I might go so far as to call the single greatest 13-episode run in memory, I don’t know that approaching the show from a critical point of view is going to get you very far. Non-review recapping is a silly practice that adds nothing to the conversation unless you’re so funny you ought to be doing something more interesting than recapping television shows. And general discussion tends to just come down to “isn’t it SO GOOD?!”, “it totally is”. So, no, I don’t see much of a point, especially because the show already has plenty of buzz- it’s been renewed for season three (in NBC I trust, for now) and, while nobody seems to be watching its less remarkable but still pretty wonderful blockmates Superstore and Great News, most people I talk to about The Good Place are already on the train (good for them, they’ve been spared a lecture, this time).

But then I watched the season finale, an unexpected detour of an episode that spends a few minutes picking up where last week left our six characters off then careens in yet another new direction and boldly entrusts the audience’s sole attention to the inimitable Kristen Bell without the help of any of the series’ charming mythology or brilliantly developed co-leads (to call them supporting characters just feels inaccurate; the pilot and this finale aside, “ensemble” really is the word). I don’t really have anything to add to the conversation about the finale and how the brilliant Michael Schur was able to surprise me even though the one thing I was sure about going into the finale was that Michael Schur would try to surprise me. I don’t have funny jokes to make about the funny jokes (hey, Ted Danson as a bartender, what a clever nod of nostalgia!). I’ll say that the finale wasn’t one of my favourite episodes of the season but is that even much of a hot take after 12 weeks of “god, this show!!!”?

The only reason I’m writing about The Good Place comically soon after saying it’s dumb to write about The Good Place is that the episode kind of talked me into it, in a confusing roundabout only-sort-of way I will attempt to explain. If I end up philosophizing and never adequately connect the themes to my decision to stop theorizing on whether I should write and just write, I apologize in advance; it makes sense to me at least and I miss writing stream-of-consciousness TV articles, so here we go.

In those first few minutes of the episode when the gang is all together, Janet declares her love for Jason, it hits Chidi (my favourite character) right in the heart and he stops arguing with himself long enough to actually figure something out. Janet’s speech wasn’t anything all that special- it didn’t need to be, it was for Jason. The moment wasn’t about what she said so much as that she said it. The first two seasons of this show are so much about that, about the idea of trying, of doing something, of not just accepting yourself and the world and the fact that the rules of the universe seemingly dictate that the unfathomably beautiful Manny Jacinto will never be yours. For years, our television landscape has been dominated by bad guys who are maybe pretending to be good but aren’t all that interested in being better. This has always driven me nuts because I fundamentally believe that human beings- all of us, even the dangerously misguided ones- are trying to do good. The Good Place isn’t just the rare show that believes that too, it’s brazenly about that. Its characters have been made to reckon with who they are to acknowledge that they can do better, and they’re actually trying to. It’s like the whole thing is presided over by a celestial Mr. Feeny, reminding his class not just to do well but to “do good”. They’re trying, they’re failing a lot but they’re trying.

Chidi is the character who works best for me because he encapsulates the kind of mediocre person stasis I most relate to- it’s not that he can’t be bothered to do the right thing, it’s that he isn’t sure what the right thing is so he ends up doing nothing. There’s currently a duo of theatre reviews on my to-do list that are tragically overdue. They’re a tricky thematic and political pairing of shows that demand to be written about in tandem with a thoughtful eye towards their place in a very intense and very delicate moment for the Toronto theatre community. It’s not that I’m too lazy or busy to write these reviews, it’s that I’m unsure of how to write them, what to say, how to do good in a situation where I don’t feel like I have much to contribute to the conversation. So I just haven’t written them. I have no idea what the right way to deal with these reviews is, but not writing them is definitely wrong. I’m such a fucking Chidi.

We’re all all of them, really- we’re all unsure and stuck (Chidi), lazy and selfish (Eleanor), too proud to see clearly (Tahani) and too ignorant to realize the harm we do (Jason). We may all also be jovial torture demons and all-knowing helper “not a robot”s, hard to say. We all suck but The Good Place is bold enough to say that there’s maybe something we can do about it- people can change. It’s almost a radical statement, a plea for personal action and empathy towards people we might otherwise have written off. Tahani declares she’s only come as far as she has because she and Eleanor (someone she initially despised) are friends. Eleanor only learned to put others before herself when she started to care more about Chidi than about herself. Jason hasn’t really grown but, gosh, he’s sweet and I really think he just needed to get out of Florida.

“Simply put, we are not in this alone” was the episode’s big takeaway; it made me think of my favourite piece of journalism from 2017- the engrossing interview with former white nationalist Derek Black on The New York Times’ Daily podcast. Black’s story is a moving refutation of the idea of “heroes” and “villains”, good people and bad, a real-life extrapolation of Michael’s stated fear that maybe the bad place if full of people who had it in them to do good. Black’s story has two heroes (not to use a word that I literally just called out as unhelpfully simplistic but you know what I mean), three if you count Black’s own willingness to change as heroic, which you absolutely should because it’s way more than most of us do.  There are these two young Jewish men who encounter Black at college. The first invites him to a seder after learning of Black’s family history and hateful beliefs, an unbelievably brave thing to do and a show of faith absolutely no one would have blamed him for not showing. The second meets him at said seder and sets about changing his mind- point by point, patient argument by patient argument, until the indoctrinated hate that had guided Black for so long just stopped making sense to him. It’s an incredible story about the capacity for change, the power of empathy, and how there’s nothing in the world that can affect us more than we can affect each other.

One of our other Toronto theatre critics recently ran into a similar problem to mine but his completed review is currently sitting in my inbox ready to be published. At this point I shouldn’t have to explain much further but to say that he stopped trying to write it alone. He turned to someone else to help figure out the right thing to do, then he did it. He made like Janet and just said what needed to be said with whatever words he had even if they weren’t the very best ones. I haven’t read it yet, I’m sure it’s great, but what matters is that he wrote it, he did good because someone was there to help him do it. I’m gonna try to make like Chidi in the finale and follow that lead. At the very least, I wrote about The Good Place because my heart wanted to write about The Good Place even though my brain was all “girl, no one needs to hear what you have to say about The Good Place, these thoughts aren’t even coherent!” and now we have some TV content to help break up the avalanche of theatre content at this time of year. Good. Good on SUCH a small scale, but good. Small steps.

I hope the characters of The Good Place never make it to “the good place”. I wonder if there even is a good place; it seems unlikely to me that any person in the history of the universe would have actually gotten there (is it just dogs? Guys, I think I just figured it out, the good place is just dogs!). I know it will only stay brilliant if it’s allowed to end but, selfishly, I want The Good Place to stay around forever, until we’ve met everyone in the bad place and contemplated how their quest to do good went wrong. But even if it ends, and it will surely end sooner rather than later, I want it to end with an ellipsis, a sense that the good place goal will never be achieved but that doesn’t mean we should stop trying to achieve it. The goodness is in the trying, and the failing, and the still trying.