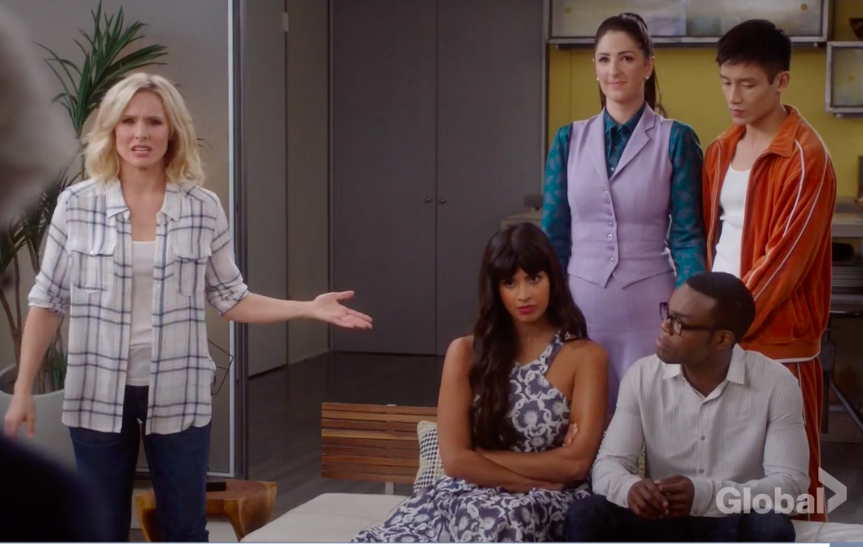 Season Wrap Up: The Good Place

Every conversation I’ve had about NBC’s afterlife comedy The Good Place to date has gone in pretty much the same direction.

Me: Yeah. It’s not blowing my mind but I like it.

Other Person: The cast is good.

Me: The cast is great.

Me: and I’d follow Mike Schur to the moon.

Other Person: But where is it going?

Me: BUT WHERE IS IT GOING?!

The premise had an expiration date- newly deceased medium person “Fake Eleanor” was put in The Good Place with all the good people by mistake. Mayhem ensued.

Showrunner Michael Schur and his team are contemporary sitcom royalty who played major parts in establishing some of the most creatively succesful network comedies of the last twenty years (The Office, Parks & Recreation, Brooklyn Nine-Nine). They know the building blocks of a great sitcom, so they know how to knock them all down.

They ran through plot like gangbusters, blowing up the premise by midseason when Eleanor just up and tells everyone she’s in The Good Place by mistake.

So we’re just two months into a new show, the central premise is done for, at least one ongoing mystery has been solved (Jianyu is really Jason- one of the great reveals in modern TV history? Certainly a consistently delightful and surprising supporting performance from Manny Jacinto), and pretty soon we’re going to have both our central rivalry (Eleanor and frienemy Tahani) and our will-they-won’t-they love triangle (Eleanor-Chidi-Tahani) pretty  much sorted as well.

The Good Place was always going to be NBC’s next big comedy hit. The network went hard on the marketing, they have the perfect timeslot partner in delightful Office-y ensemble gem Superstore, and that cast is the ideal sitcom combination of beloved (Bell), legendary (Ted Danson) and UCB (D’Arcy Carden, the genius behind AI universal assistant Janet), so obviously it seemed pretty weird when the first season was slated for only 13 episodes. That’s usually the “we’re about to cancel this thing” order. But it turns out the short order was Schur’s scheme, not NBC’s failing.

There was a master plan. A totally-integrated-from-the-start serialized narrative masked as a semi-episodic high-concept/simple-execution pleaser. It was a long con but Schur & co. kept it not-so-long, probably to avoid the brazen lying that comes with trying to pull “the mother is dead”/”they’re all in purgatory” wool over the audience’s eyes over too long a period.

Or maybe the short-long-con was so short because they know exactly where they’re going and didn’t want to waste time getting there.

Just a few days ago, I would have responded to that last notion with little more than skepticism but since watching Thursday’s revelatory two-part season finale, I couldn’t be more on board. Take this thing wherever you want, Mike Schur; it’s clear now that you know exactly where you’re going.

*All the spoilers in spoilerdom*

It all really boiled down to one big revelation. Along the way, we visited “the medium place” (populated by a fairly dull Maribeth Monroe, a corrupt 80s power lawyer who did one good thing in her life) then dallied with a conveniently vague Michael flashback or two as our main four departed souls (plus Janet) fought for their right to avoid eternal torture in the bad place.

Eleanor watches them all agonizing and puts it together Sartre-style: this “Good Place” is The Bad Place.

Tahani’s pride and Chidi’s punishing indecision disqualified them for The Good Place right alongside their “mistake” compatriots and Michael turned their afterlife into his star-making experiment at his underworld day job. Rather than go the traditional fire & brimstone route- what if we let human beings’ unique ability and willingness to torture each other do the work instead? Hell is other people and Eleanor, Chidi, Jianyu, and Tahani are the perfect combination of people to make each other miserable for eternity, no matter how seemingly nice their surroundings are.

And that “seemingly”, that’s key. This is where Schur really earns his genius status.

This was not a midseason idea that cropped up as a potential “fun twist” when they realized their premise was expiring like when a bus hits a certain Seattle hospital every year around sweeps time. It was all there the whole time (and there are flashbacks to back this up), we just missed it entirely. The coincidences, the “mistakes”, the clowns, the yogurt- Hell.

The season ends with a total reset, our characters’ minds erased and their souls re-assigned to the same neighbourhood with the same torturous goals. Only now they’ve been separated further, assigned different (distracting) soulmates to prevent them coming together too soon to uncover Michael’s evil secrets. But Eleanor left a note for herself, a clue to set her on the right path in the new mystery-solving comedy that will be season two- “Find Chidi”.

Only one problem: “What the fork is a Chidi? And why can’t I say fork?”.