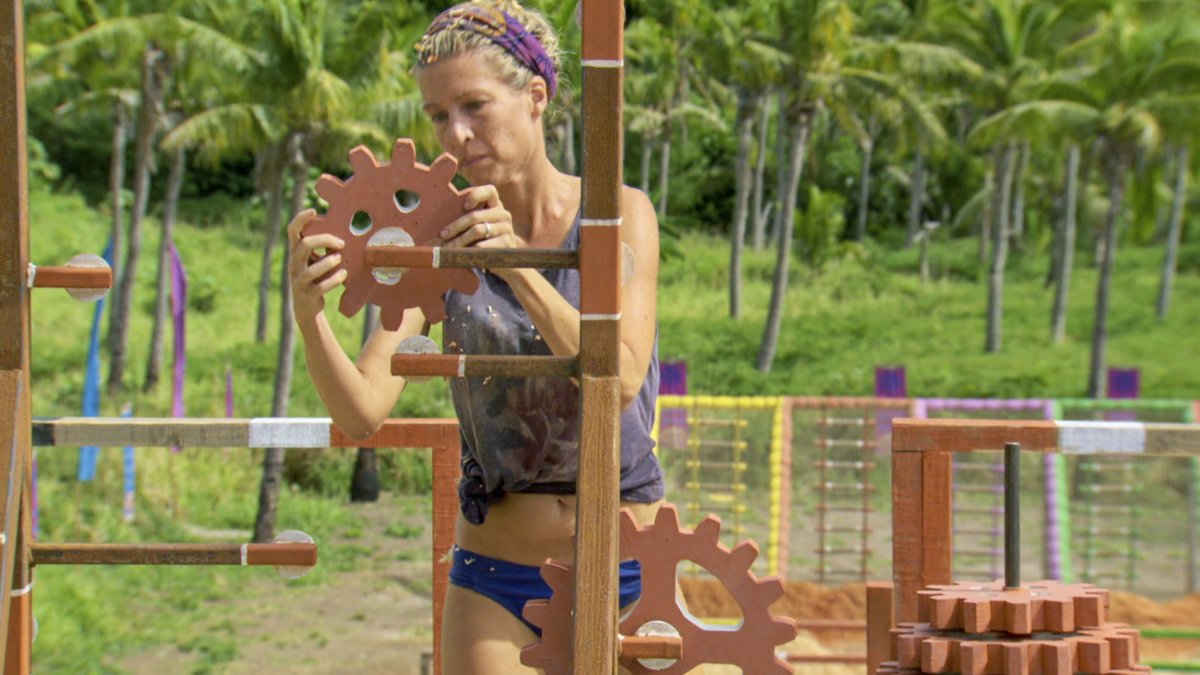 Oh, Survivor. Like a carnival game at an immunity challenge, you are a fickle thing to count on. After last week’s big-time, all-time episode, you have returned to your old ways. Advantages, the very thing that ruined Game Changers, rear their ugly head again to eliminate all drama from the season. The greatest joy that an idol has brought me in the past few seasons is when Mike threw half of one in a fire, where it belongs, last week. I am so tired of one person dictating all of the action because he repeatedly finds idols, especially when it is so obviously telegraphed to us from the start of the episode that there is hardly any drama to begin with, but what little remains is brought to a grinding halt. I am weary of Ben. I am tired of every other confessional belonging to him. I am tired of his attitude and his arrogance and his arbitrary yet defiant moral code. I deeply fear Ben is going to win this season, and it will be a Mike Holloway-ing all over again, except worse because this season I actually like some of the people left in the game.

But let’s start at the beginning. At the top of the episode, Ben returns to camp gleeful, boasting of how he “turned all the votes on him” on purpose so that he could idol out Lauren, which doesn’t seem to me to be what happened. It seemed like he was trying to get everyone to vote with him, and then upon everyone confirming that he has absolutely no influence on the vote, he resorted to the idol as his only play, and is now taking credit for it as a great strategic move, which is very classic of so many of the men this season. Speaking of false confidence, Devon tells Ben he should have voted him out instead of Lauren, because Devon is not going to let Ben win any immunity challenges, as if Devon is in any conceivable way more of an immunity threat than Lauren. Knowing that it’s him against the world, Ben goes searching for an idol. He claims that they are not easy to find. I’m going to play Maury for a moment and say that our lie detectors determined that this was a lie. They dedicate way too much time to him searching for it and narrating it and it’s just a waste of everyone’s time and an insult to the viewing audience that we could possibly not know whether or not he’s going to find it.

The reward challenge is run in random pairs, The Good Guys (Devon and Chrissy) vs the Muscles (Ben and Ashley), vs The People Who Are Not Winning This Challenge (Mike and Ryan). The reward is for a sleepover on a private island, and in the best thing to happen in this episode, Devon and Chrissy come out on top. They pick Ryan to go with them and Ashley is completely unnecessarily dramatic about it, and Probst reacts in a completely unnecessarily dramatic way in some sort of plea to add a shot of any intrigue to this dull episode. On the getaway, Ryan, Chrissy, and Devon make a final three together, which can obviously only make sense for one of them but I’m not entirely sure who it is, so I can’t really blame them for all thinking this is a good idea. I’m inclined to believe this will work out the best for Devon, but it’s truly hard to say where a lot of this jury is going to go, especially the early jurors, the former healers, who had little time to get to know any of these three. I had actually forgotten until this reward that Devon and Ryan used to be besties, but as far as I’m concerned, this is a great final three for me as long as Devon or Chrissy comes out on top. And, honestly, I’m a little bit team #AnyoneButBen at this point, if only because I detest obvious hero edits.

Back at camp, surprise! Mike has crybabyitis about not being picked for the reward. He makes up some completely nonsense excuses about why Ryan didn’t deserve to go on the reward, and he and Ashley mope around like four-year-olds. Ben notices this, and tries to use it to his advantage, which he can’t do because no one likes Ben and he’s not very good at this game. Mike flaunts his classic baseless confidence by boasting that because he hasn’t found an idol, there must not be an idol anywhere. It is this sort of hubris that will be the downfall of this entire season in the end. Because, for no reason other than their own arrogance, this group believes Ben won’t find another idol. They allow him to control the vote two consecutive weeks, which only makes for good TV if you love Ben, and you have to really love Ben to enjoy this sort of predictable cancellation of all strategy twice in a row.

At the immunity challenge, Chrissy proves herself once again to be the queen of puzzles and pulls it out, so going into this tribal council she feels as though she needs to make a decision between Ashley and Ben, she too being part of the Unwarranted Confidence Brigade in thinking that Ben couldn’t possibly find another idol. They think about splitting the votes, and Devon gets sketched out by Chrissy wanting to get rid of Ashley before Ben, but ultimately we kind of know none of this matters, right? We go into tribal “not knowing” whether or not Ben found the idol, which a clue instructed him was hidden under the shelter, except that we totally know whether or not Ben got the idol. Hiding it under the shelter in this scenario creates zero drama, because Ben is obviously the target, so why would he care whether or not people publicly see him getting the idol? He can just march up and grab it and show it to everyone, since he does that at tribal council anyway. He plays the idol before the votes are even cast, and instructs people to vote for Mike. Chrissy says that the way he played the idol is very annoying. Her point is extremely petty, except that I completely agree. Either out of spite or because she was their second choice, everyone, including Ben, votes for Ashley. I’m intrigued by the strategy of voting out the goat, a classic final 6 move made by Cirie against Courtney Marit all the way back in Panama, except that in that season there was a clear winner candidate in Cirie.

We are left with 5, and the good news is it’s still anybody’s game. The bad news is I must mentally prepare myself for a Ben win, so that any other result would be pleasantly surprising. I’m looking forward to a supersized recap for what’s hopefully a more thrilling finale than I’m anticipating, and being able to reflect on the whole story of Survivor: HHH. I hope you’ll join me!