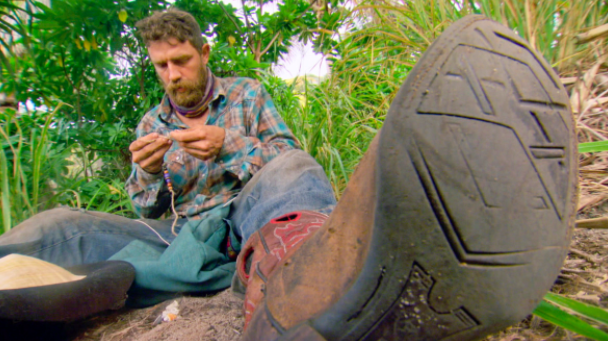 Welcome back to what is finally, finally an absolutely phenomenal episode of Survivor: Heroes vs Hustlers vs Hoo Boy, we have a lot to unpack here so let’s jump right into it.

Returning from Joe’s blindside, Chrissy confronts Ben about his two-timing ways. Throughout this episode, Chrissy and Ben are both going to demonstrate some really bad gameplay with one another, but at this juncture Ben really takes the douche cake. When Chrissy asks him what happened, he dismissively says “Joe went home,” and refuses to give her further information. Then, when she chews him out (not a great move, granted), he tells her to “stop mothering” him. I am so frustrated by this because what Chrissy’s doing, i.e. calling Ben a jerk, is explicitly non-motherly, yet the fact that she is a mother filters everything she does through a parenting lens, which in this case has a clearly negative connotation from Ben. No one would ever accuse Ben of “fathering” someone for yelling at them, and even if they did it would likely be considered a positive thing, evoking responsibility and sturdiness. This really made me angry, which revved me up for an almost nonstop roller coaster of terrible strategy and amazing moments in this episode.

It’s loved ones time at the reward challenge, cue the waterworks! Ashley’s dad is dressed like Jeff Probst. Ryan with his dad is the first to make me cry, not because of their relationship, but because people reaching their dreams always gets me. Ryan promised his dad they would make it to this day and they did, which I can always appreciate as very special for the superfans in particular. I really appreciated all of the little character moments in these visits in particular. I loved Lauren and Chrissy saying “God bless you” to Dr. Mike’s wife for marrying him, and I really loved Lauren’s superfan sister hugging Probst before she hugged Lauren, then setting up CBS for a casting plug at the bottom of the screen while they talked about going to an open call together. Ben and Chrissy with their spouses was nice, but it was Devon’s mom who ultimately destroyed me. These two are so sweet together, and his mom remaining so calm, just so happy to see her son out there, while Devon totally broke down was really amazing to watch.

I did say that this episode was almost a nonstop roller coaster. One thing we did learn was that nothing brings a flood of emotions to a grinding halt like the worst reward challenge I’ve ever seen. It was pure luck, just pulling the correct colored marbles out of a bag. Probst claims that this was to save time because they had too much story, but there are plenty of very quick challenges that aren’t literally picking the winner out of a bag. Chrissy ends up winning and picks Ryan, Mike, and Ashley. Her reasoning for not picking Ben is purely vindictive, which is not great. However, I firmly believe that with these seven people, all of whom are playing this game as hard as they can, it did not matter who Chrissy chose. Making people indebted to you through rewards pretty much never works on Survivor, even back in the old days, but especially in this modern version of the game. Picking Ashley was a good effort since she knew she was the most likely to turn on her alliance, though I don’t think giving her time with her dad really contributed to that decision. Ashley already had plans to turn on Ben, and is looking to add a big move to her resume, so this was really just a happy coincidence for Chrissy.

Back at camp, Ben is crafting a fake idol. He claims it’s to buy them time to look for the actual re-hidden idol, since the opposing alliance will stop looking if they think they’ve found it, but Lauren, I think correctly, identifies that Ben just wants to make Chrissy look dumb for personal reasons. Lauren then manages to find half of an immunity idol, with the message that the other half is at the challenge. While I’m very happy they’re bringing idols at challenges back, it sort of takes the excitement out of it if it’s literally just a shell two inches in front of you. Needless to say, Lauren grabs the other half at the challenge and she’s now loaded with advantages that will only prove to be her downfall.

Nothing too much of note happens at the Passion of the Christ challenge, but Devon throws it to Ashley when they are the final two remaining, stating plainly that they are a tight alliance to the extent that it doesn’t matter to him which one of them wins. Back at camp, Ben overhears Devon, Lauren, and Ashley tossing his name around, and becomes paranoid. To Ben’s credit, I’m glad he didn’t just sit around and let them vote for him so he could play his idol, since I believe it’s always better to rely on numbers than the idol. Ben did a great job of not telling anyone about his idol, so he can still play it and take someone else out, but I’m glad he’s choosing to play the game and try to flip the vote before resorting to the idol. Unfortunately, that’s about all I can say positively about Ben’s (or really anyone’s) gameplay for the rest of the episode. What follows is an incredible chain of catastrophic events for nearly everyone involved. Feeling paranoid, Ben tells Mike, Ryan, and Chrissy about Lauren’s idol. My favorite response to this is Mike realizing the vote might flip and saying “Never underestimate Dr. Mike,” as if he had anything to do with it. A running theme for Dr. Mike is taking credit for things that had absolutely nothing to do with his gameplay. My least favorite response to this is Chrissy not even giving Ben the time of day. I said it last week in reference to Dr. Mike and Ryan and I will say it again this week: You do not need to trust someone to entertain the idea that they are coming to you with. It is always worth it to seem receptive, because even if you are on opposite sides, sometimes your interests might align. The numbers do not have enemies. Chrissy refuses to commit to this plan, making Mike nervous. Mike then goes to Ashley and Devon and tells them that Ben sold out Lauren to Chrissy, telling her about Lauren’s advantages. In an effort to win back Mike’s trust after learning Ben is trying to blindside her, she gives him half of her idol, rendering it useless for the vote tonight and showing him faith that she trusts him, which she absolutely should not. We head to tribal with everyone mad at everyone, and tons of confusion in the air.

Lauren tells the tribe that she does not have the extra vote with her, and that Mike is holding half of her idol, so no one need worry about her advantages tonight. Mike confirms this, by standing up and throwing his half of Lauren’s idol in the fire. I will give Mike credit on this one: This was a truly brilliant TV move. I did not expect it at all, and after 35 seasons, it is tough to make me audibly gasp while watching this show. I applaud Mike and this entire episode for bringing some real Survivor magic to this season. Everyone is moving around and changing their votes on the spot. Ryan and Chrissy still seem to want to vote for Lauren, but Devon pushes so hard for Ben and eventually wins the day. Ben plays his idol, cancels out the unanimous vote, and sends Lauren packing with his single vote. I would say this was an epic meltdown by Lauren, but in her defense, no one had any way of knowing Ben had an idol, and if he didn’t she wouldn’t have come close to going home vote-wise. It wasn’t great gameplay for her, but it was worse from Ben. He’s now the biggest threat in the game, idol-less, actively disliked on a personal level by at least one member of his tribe, and has no alliance to speak of.

I mourn the loss of Queen Rimmer and love that she made it as far as she did, bringing an uncommon energy and becoming an unlikely fan favorite, but I am so happy this episode was everything it was. Exciting trainwreck gameplay, to me, will sometimes be more exciting television than expert strategy. This was one of those times. I truly believe the only people left playing really good games are Ryan and potentially Devon, but the nature of this fantastic final 7, now final 6, is that we still have truly no idea who is going to win, and for the first time this season, I’m dreading the end of the journey.