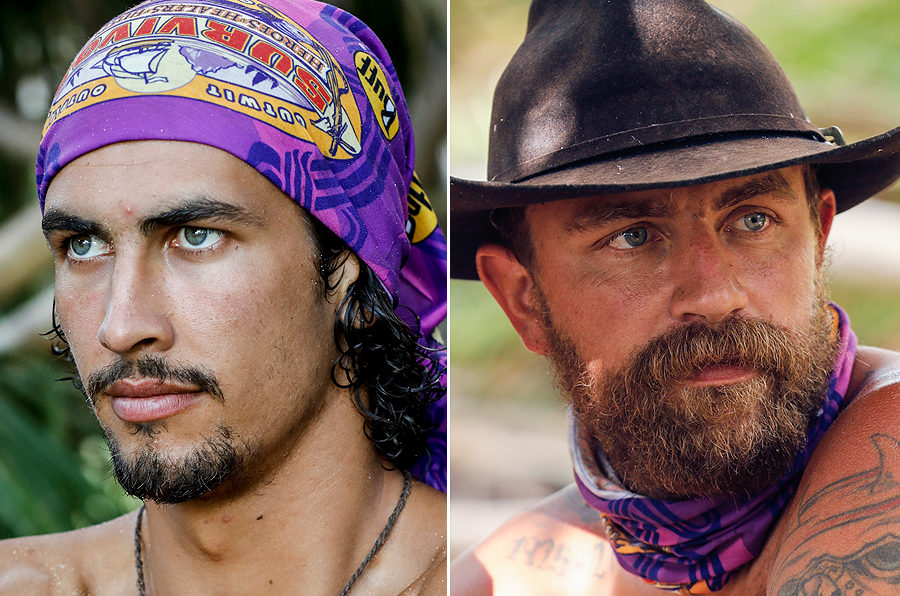 A double episode means a super-sized recap so let’s skip the intros and get to celebrating because this season just got good!

Returning to camp after Cole’s exit, Joe is annoyed at Mike for misplaying the idol, and the two healers remain on the bottom. Mike claims that he wanted Cole to go home so that he and Joe can remain a tight pair and vote as a unit. However, the fact that Joe is openly extremely irritated at Mike, and that no one still wants to work with them and now they are idol-less, indicates to me that Mike accomplished none of his goals and just wants to seem like he’s good at the game. Spoiler alert: He is not, and this double episode only proceeded to confirm that for me.

The reward challenge features lots of toes and heavy-handed metaphors about how building a tower of blocks with your feet is the same thing as playing Survivor, because sure. Challenge Beast Lauren ends up winning it, and selects Devon, Ashley, and Ben to accompany her on a trip to a magical spa where pecan pie is considered spa food. She claims that she picked these four strategically – these are the four she wants to work with once the magical alliance of seven finally reaches seven. There’s some good news and bad news for Lauren here. The good news is that Ryan seems to fully believe that Lauren’s selections were non-strategic and based on who physically needed the reward the most. It is a very valuable asset in Survivor to be able to make strategic moves without people realizing they are strategic. Unfortunately, to the people on this reward, I worry that Lauren’s balls-to-the-wall strategic talk will blow this up for her, and she will start to be seen as the danger that she is. The bad news is that this four makes no sense to me as the best path for Lauren to win. Devon and Ben are both highly strategic (which, to Devon’s credit, Lauren may not even be aware of, as I myself wasn’t until this episode [Editor’s Note: say it with me now- “Kelly, you were right; I’m sorry I doubted you”]). She should know, however, that Ben and Devon are both extremely likable and that, combined with their strategic prowess, is a danger in front of the jury. We haven’t seen much of her, but Ashley too is not exactly a guaranteed goat, despite what Joe may say. If Lauren really wanted a four she could win against, I would have advised including either JP or Joe, or even Chrissy, as people more likely to lose a jury vote than Ben or Devon.

On this reward, Lauren tells all three other people about her advantage, and everyone spills the tea about the information they have. Lauren wants to bring Joe and Mike in to gain the voting majority, but Ben hates Joe. Ben seems to be willing to vote with him this time around, but this chasm will ultimately prove to doom this alliance to a one episode voting bloc. Also on the reward, the four get surprise letters from home, which felt like a rushed segment. We don’t even get to learn who Devon and Ashley’s letters were from. Fortunately, we have the loved ones visit next week so I will surely shed more than my fair share of tears as I always do. Finally, Devon is incredibly excited about pickles which is the first time I’ve truly related to him. #TeamPickles.

Back at camp, Mike is a big baby about being stuck back at camp with Ryan, Chrissy, Joe, and JP. The mark that Mike is not a great strategic player is that instead of attempting to make inroads with Chrissy, Ryan, and JP who we know are a tight three based on their previously swapped tribe, Mike sits around whining and being annoying with Joe. When (and I’m pretty sure it’s coming soon), Mike is voted out, he is going to blame it on everybody else not wanting to make moves and getting unlucky playing for the bottom, but in reality it will be because he is either not interested in, or is incapable of, building social relationships with people he’s not working with. Meanwhile, Ryan and Chrissy look ahead to clipping Ben at 7, and are far too confident that they will get to the 7 without a hitch, a sure sign that that will absolutely not happen.

Returning from the reward, Ben goes off to be alone with his letter, and literally stumbles on a clue to the idol. I won’t lie, this is really starting to get frustrating. I’m not calling for returning to full-on treasure hunts for idols, but we don’t need to go back that far for them to have made good TV. Remember when Tai’s hands and feet were literally bleeding from shimmying up a tree? Let’s do more of that. I want to see people earn their idols and advantages, not just stumble upon them in the woods and find them in potato chips.

However, we do get one remnant of classic Survivor at the immunity challenge: chocolate and peanut butter! This is a play-or-eat challenge, where those who choose to sit out get to eat all they can in chocolate and peanut butter, without even taking their clothes off. These new school Survivors have it so easy! Devon, Lauren, and Ben opt to sit out, irritating some other members of their “alliance” like Ryan, as is the beauty of the eat-or-play. Ashley shockingly wins the challenge literally designed for a surfer, and the stage is set for the Spa Reward Four plus Joe and Mike to blindside Chrissy, Ryan, and JP. Devon has the idea to make Ben a double agent, vote with the other 3 against Mike, and then pretend that he too was blindsided. Ultimately, after little fanfare and no visibility in this entire merge, JP is the one to go. Presumably, they thought Chrissy and Ryan were likely to have idols, but the fact that they didn’t even attempt to flush one is a surprise. They took out a number, but also the only true goat remaining. While this editing wasn’t as unreasonably shocking as some episodes this season, I would have liked an explanation as to why they went with JP out of those three. Though JP is no loss in terms of character or strategy, this vote is galvanizing in that, going into the second part of the episode, we are now set with eight players, zero honest-to-God goats, and a very excited fanbase.

Returning to camp, Ryan and Chrissy do a nice job not pulling an Ali and keeping their cool after their blindside, and Ben does an equally good job playing dumb, which he will continue to do for the rest of the episode. The Ben double agent thing could have been a real boon for his side, if only they had decided to target Ryan and Chrissy. The fact that he knew where their votes were going could have been their golden opportunity to get rid of one of those two strategic minds. They do manage to flush the idol, but I feel like they may have fumbled a great chance.

Meanwhile, for someone who just accused Ryan and Chrissy of being blinded by power, Devon has gotten far too confident. In his defense, however, everyone seems to be high on their own gameplay, with even Ashley confessing that she feels it’s her game to lose right now. After a challenge divided into teams randomly, Devon, Ashley, Joe, and Ben go on a reward. Ben continues to pretend to play dumb, enabling Joe to truly believe he’s in the majority and is playing a great game, which just makes him look like an out-of-touch idiot, so I’m really savoring this scene. Back at camp, Ryan goes to Mike to discuss strategy, which Mike shuts down immediately. This is another strike against Mike. A good, baseline rule for Survivor is that when someone approaches you to talk game, you at least need to act open to it 90% of the time. Mike feels confident because he was looped into the majority for literally one vote, and now is too good to entertain strategic thoughts from Ryan even though it could be in both of their best interest, just because his feelings were hurt that Ryan wouldn’t work with him before. This game is constantly changing, and the numbers aren’t personal. Just because someone didn’t want to work with you before, doesn’t mean they are never an option for the rest of the game. Mike is playing with machismo and not logic, and it will be his downfall.

Chrissy attempts the same type of conversation with Lauren, who is slightly more receptive, but Chrissy gets the memo that it’s a nonstarter. She starts to break down for the first time, complaining about the hunger and the exhaustion, and for a brief moment I was hopeful that she was trying to pull a Jenna Morasca from the Amazon; she knows it must be between her and Ryan, so she’s trying to make herself look like the weaker player so that they will want to keep her. Unfortunately she confirms in confessional that the breakdown was real so it’s hard to put any stock in my theory, but she does assure us that she will never say die. To this cast’s credit, I’m not sure any of them ever will, which makes for a fantastic endgame.

Speaking of Chrissy, she wins immunity! I am very excited for her. The challenge culminates in the spelling of a 12-letter word, which Chrissy whips out seemingly instantly, lending credence to what several have said about her in press: She is one of the best puzzle-makers of all time. At camp, Devon confesses he doesn’t even have a 12-letter word in his vocabulary, which I know is a joke, but I also sort of believe him. Speaking of Devon, he comes up with an incredibly complicated plan for tribal: The four in his alliance are going to vote for Joe, but tell Joe that they are using Lauren’s extra vote (which they won’t), to split between Ryan and Ben. Chrissy and Ryan are not included in this plan because they can’t know about Lauren’s extra vote. The drama comes from the fact that Ashley is very scared of Ben and goes to Devon with the idea of getting him out. Ultimately, this does not come to fruition, but the fact that we have seen both Devon and Ashley and Ryan and Chrissy discuss taking out Ben as soon as possible may spell doom for our cowboy, idol protection and all. Going into tribal, we know it’s either going to be Joe or Ben and for the first time in a while, I am truly nervous. After some incredibly cringeworthy talk from Ryan about prom, followed by him using his idol, the good guys win and Joe is sent packing, punctuated by Chrissy’s perfectly sarcastic “That was a really tight alliance.”

I am leaving this double episode relieved for two reasons: The show has finally, finally, picked up the steam we were hoping for, and, equally importantly, I will ideally have to see Joe showing up on twitter less. See you next week for more shaken up alliances and hopefully more Devon wearing cowboy hats!