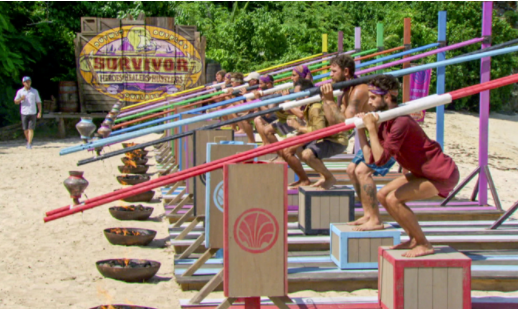 Welcome back to Survivor 35 and Happy Thanksgiving! Personally, this episode left me stuffed with questions and a little unsatisfied, but overall was a pretty tasty meal, despite losing my favorite dish, a hot slice of Cole. Okay that’s enough with the half-baked (ha!) food metaphors. Into the episode we go.

Mike starts off the show by throwing former alliance mate Cole under the bus, trying to make sure that, if the healers must go, he’s going to be the last one standing. Amazingly, no one has noticed that there was a vote missing from last tribal, so Lauren gets away clean, advantage still intact with no one any the wiser, except Ben. In the war of information, Ben is building a powerful army. He is the only one who knows that Lauren has the advantage, and Ryan entrusts him with the knowledge of his shorts idol. Ben, like many in the huge seven-person alliance of everyone except the three healers, is looking ahead to final seven, and figuring out where he can optimally fit in there. In the interest of this end-game, he tells Devon about Ryan’s idol in order to throw shade onto Ryan, a big social and strategic threat (apparently, though I maintain that the show has demonstrated to us at home very little of this alleged social game). Devon, Ryan’s best bro, already knows about the idol, but Ben’s strategy works for an unintended reason: Ryan told Devon that he was the only person in the game who knew about the idol, which, at the time, was true, but Ryan never told him he was planning on telling Ben. This unnecessary lie or withholding of the truth by Ryan enables Ben’s plan to succeed, and Devon seems on board to make a move against Ryan once we finally get to that magic seven.

A reward challenge happens and the winners get to go on a yacht, to eat giant sheet cake and be mooned by their tribemates back at the beach. The reward gives Joe some time to reflect on just how on the outs he really is, and he makes the decision to be indiscriminately mean to everyone just to shake things up. One of the worst consequences of the Russell Hantz legacy is that people on the bottom tend to now think that creating random chaos will help them, as though pissing off everyone will mess with their minds so much that they’ll start making irrational decisions. The problem with this “strategy” is that if you do it in a completely directionless way, just hurling insults at people like Joe does with Ashley, all it does is make them more mad at you. Russell wasn’t playing from the bottom when he created chaos in Heroes vs Villains, and at least in Samoa he had three loyal allies that would not turn on him under seemingly any circumstances. Joe has no allies, is a huge threat, and no one likes him personally. Just being rude to people will not help him here. Ashley, however, is great in this scene. It’s really nice to see Ashley as her own character rather than just half of a C-plot showmance with JP, who only technically is still playing Survivor. She calls Joe out for being mean and obnoxious in confessional, and she stands up for herself when he is verbally assaulting her. I certainly would not be mad at more Ashley screentime in the upcoming episodes.

Lauren comes up with immunity after a torturous looking challenge, so all eyes are on the healers. Ben is committed to getting out Cole because he ate peanut butter or something and is very good at challenges. I’m extremely annoyed with the fact that we are voting people out based on challenge prowess this far from the final 3. Cole is not going to win out from final 10, and even if he does, if everyone hates him so much why are people so concerned about him getting to the finals? This is a silly, personal vendetta that Ben has, and then, when he is challenged by his alliance mates who correctly point out that Joe should be the target, he criticizes them for playing emotionally. It’s really grating to watch, particularly when Chrissy gently tells him some of his allies are feeling steamrolled and he responds with “No they aren’t.” Chrissy, Ashley, Lauren, and Devon have a conversation where they agree that the votes should be split between Joe and Cole, not Mike and Cole. Ben will later try to justify his targeting of Mike by saying that he wants to flush the idol, which either makes Ben an idiot or he realizes his plan is bad but won’t admit he’s wrong. From where I’m sitting, flushing Mike’s idol but leaving Joe in the game is the worst possible scenario for this group. As long as Mike has the idol, they know where it is and that Joe can’t go find another one. The thing that makes Joe such a huge threat is his propensity for idol finding. If it’s flushed from Mike, it goes right back into the world for Joe to find again. This plan is so bad, and the fact that it ultimately comes to fruition isn’t really explained to us at all. I suppose since no one really liked Cole anyway and he was a physical threat, it wasn’t worth the alliance of seven fighting Ben on it. Credit to Ben for pulling off that kind of authoritarian leadership without a mutiny or getting burned, but I have a feeling his time is coming.

At tribal, Mike plans to create chaos. He confidently tells Joe, “follow my lead,” and then proceeds to accomplish absolutely nothing. Between this kind of empty gravitas and Ben’s confidence that no one feels steamrolled by him, there’s a whole mess of bold but hollow masculinity going in this episode. Mike has what I can only assume is an intentionally incoherent and holier-than-thou speech about… the revolutionary war, maybe? The statue of liberty? It’s so rambling that I found myself being confounded on behalf of Joe, who was sitting there undoubtedly wondering exactly what lead he was supposed to be following. Ultimately, Mike’s promise of creating chaos and playing Russian Roulette with the idol goes nowhere and he just pulls it out after the votes and plays it for himself, wasting it. Cole goes home and an intense build up to what seemed on track to be an explosive tribal council concludes in the most logical way possible. As much as I as a viewer want to root for shake ups and good gameplay, I am totally fine with this alliance moving forward to the final seven as planned just because I, like Ashley, have personally had enough of Joe on my television. Root for villains all you want, I can’t get behind the people who are mean with no strategic benefit. Even if Joe believes that this bad attitude will advance him in the game, he is playing for third place, ensuring that everyone hates him so much that, if they can stand him, they will drag him to the end. To me, good villains don’t play for third place.

Have a happy and safe holiday, everyone! Don’t forget to hide your plates after you eat if you’ve written any secrets on them!