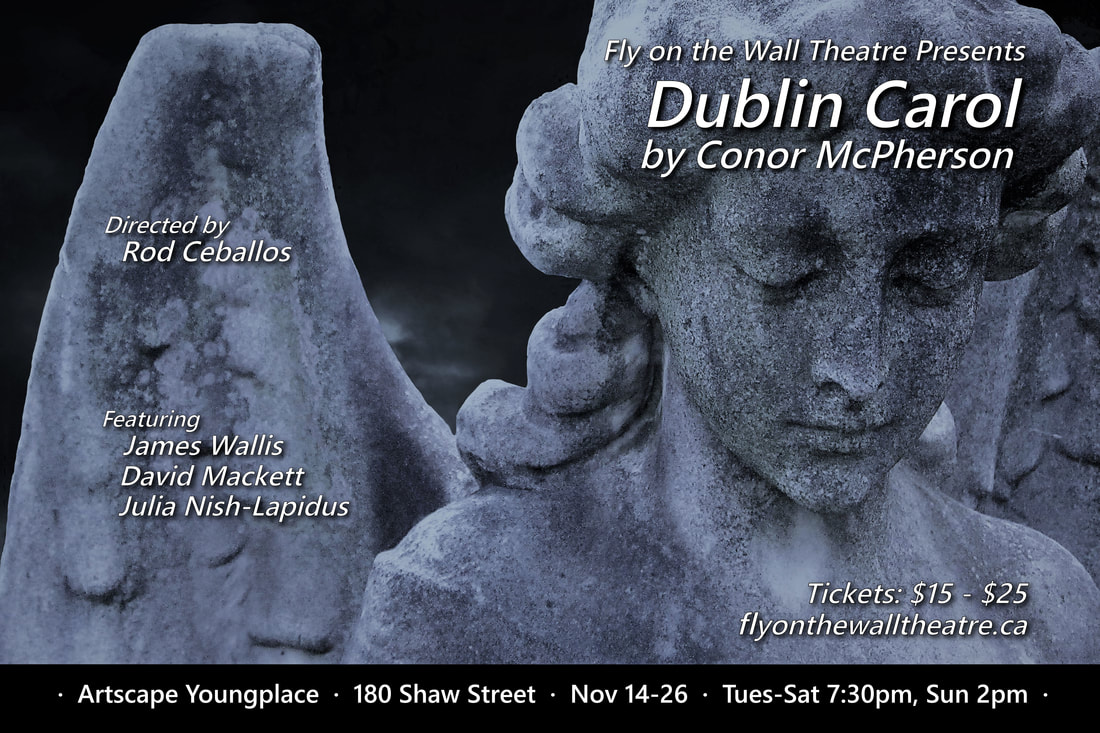 Dublin Carol is not your usual Christmas tale. Presented by Fly on the Wall Theatre, this brutally honest and bleak play is set over a single day – Christmas Eve – in the life of John Plunkett, an alcoholic Dublin undertaker. His lonely existence of booze and burials is tempered only by small moments of pleasure, like opening the daily advent calendar. But when estranged daughter Mary appears at his door unexpectedly, John is forced to face past mistakes.

As John, David Mackett is quite simply outstanding. Dublin Carol features a small cast of just three actors, so the lion’s share of the dialogue falls to Mackett, who proves himself equal to the task. He doesn’t miss a beat, whether he’s dispensing advice or facing painful memories of past mistakes. Mackett’s Irish accent, at least to my untrained ear, is also spot on.

Playwright Conor MacPherson imbues his main character with the gift of the gab. John natters away at his young assistant Mark (played by James Wallis) in the play’s first scene, telling stories and generally talking around the subject of his family. Wallis is excellent here, realistically capturing that awkward feeling of being trapped in conversation with an elder, but too polite to escape.

Although the central scene between John and Mary (Julia Nish-Lapidus) evokes emotion, I expected a confrontation after ten years to have more weight to it than is shown here. Nish-Lapidus nails the more darkly comic lines her character has, and the bitterness Mary, justifiably, still feels towards her father for walking out on his family, but it’s not quite as hard-hitting a reunion as it could be.

Dublin Carol is most effective as an intimate look at the shame, self-loathing, and loneliness of alcoholism. This loneliness is subtly conveyed through the shabby funeral home office set, which is decorated with a few forlorn Christmas decorations, and in the way that John tries to prevent Mark, his only company, from leaving, by plying him with tea and biscuits. John isn’t a particularly likeable character, yet Mackett’s portrayal so powerfully captures this man’s daily existence that I sympathized with him in spite of myself.

As the title suggests, Dublin Carol does owe something to Dickens’ holiday classic. There are parallels in the aging, unhappy main character forced to confront past mistakes on Christmas Eve, even as he continues to make feeble excuses for his behaviour. Yet in this grimly realistic tale, there’s no dawning enlightenment. John takes a few steps towards redemption, but never seems very serious about changing his patterns. There is the distinct impression that John could use a more persuasive Ghost of Christmas Past.

Lacking an uplifting ending, Dublin Carol should please anyone looking to cut through the more sentimental holiday offerings. Powerfully acted, especially by the stunning David Mackett, it serves as a cautionary tale of sorts, one that encourages sober thought and examination of our lives and our choices.