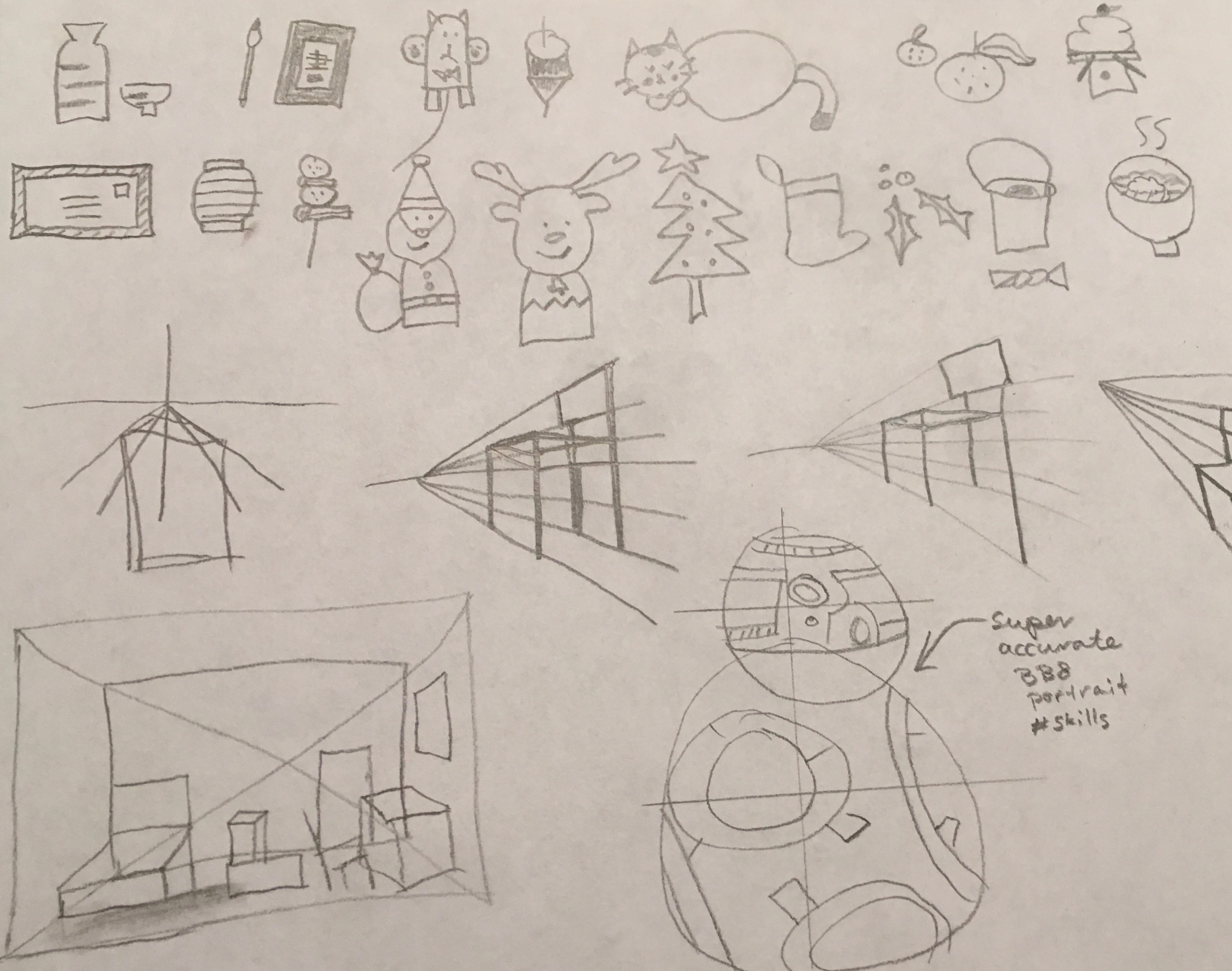 Stop telling me I can draw.

I’ve always been that person who insists that “anyone can sing” if they learn correctly. But, after my latest exercise in attempting to draw, I’m wondering if I’m only saying that because I can sing and I’m projecting my own experience of the world onto others, just like those assholes who naturally know how to draw and insist that it’s a skill that can be learned. It is not. I believe that anyone can sing, but I also believe that anyone who says “anyone can draw” should be punched in the throat, so maybe, just in case, I should stop insisting that anyone can sing. Maybe they can’t. Because lord knows I cannot draw.

Actually, hold on, I shouldn’t put myself down. There are some things I can draw, if you can call it drawing. Certainly pretty much anything in Kamo’s new How to Draw Almost Every Day book is within my limited artistic grasp. The cartoonist author offers up a new step-by-step guide to a little doodle for almost every day of the year. In the figure above, you can observe my attempts at the first and final seven days of her daily drawing challenges (she recommends using a black ballpoint pen and a series of ten basic markers to add colour but I just had a pencil so I used a pencil). At first I was impressed with how rudimentary her instructions were (“draw a rectangle inside a larger rectangle”- thank you, Kamo, for truly understanding my introductory skill level) but the fact that it doesn’t get more complicated as the year progresses left me searching for a point. If I’m going to draw every single day- especially if I’m drawing what a book tells me to draw and not just doodling whatever I feel like- I want to be better at drawing by the end of the year. “Anyone can draw” may be a lie but “anyone can inelegantly approximate Kamo’s little doodles” probably isn’t.

Here is a list of non-Kamo-dictated things I can draw: unrealistic holly for Christmas card envelopes, bubble letters, the dog in a hat that you can make out of the number 25, a weird linked rings doodle that looks like a swastika if you forget the last few steps, the Eye of Horus for some reason.

Things that are not on that list: a chair with reasonable proportions, a room or landscape of any kind, BB-8 (again, see the picture above for concrete evidence of this ineptitude).

The Quarto Group is putting out all these Learn to Draw books and, when asked if I wanted to review them, I was all “sure! I’d love to learn how to draw!” What a naive little nincompoop I was (still am? Hard to say) because, while Kamo’s book is useless in its growth-less simplicity, I was lost by page two of Lise Herzog’s Just For Fun: Perspective, let alone Russell Walks’ Learn to Draw Star Wars: The Force Awakens. I definitely should have known better than to think a book could teach me how to capture the majesty of John Boyega with just a stick of graphite but there was a part of me that really did think perspective could be “just for fun”. Perspective is not fun, guys. It’s hard and confusing and basically just math. Herzog’s book is spiritless and dry, totally lacking in any sort of authorial voice or passion for the material. It has no real step-by-step examples, just theory and pictures that illustrate that theory but don’t help you learn to put said theory into practice.

Walks’ book is impossibly vague and moves way too fast, insisting that the “strong shadows” on Finn’s face will “get you an accurate likeness” and that “if you depict the values accurately up front, the shapes will define themselves during the shading process”. What on earth does that mean?! At least Walks puts a little (appropriately nerdy) character into his writing, describing the positioning of Han Solo’s eyes by proclaiming that he’s “searching for an answer somewhere in the distance”. He’s also reassuring despite the fact that you have to be a pretty expert artist to at all follow his instructions. When you hit the terrifying hurdle of Harrison Ford’s undefined hairline, he proclaims that “by the time you’re finished, it will look fine”. It did not look fine, Russell, but thank you for believing in me.

I really did try. I love the idea of being someone who can draw; what a lovely romantic notion- think of all the meet-cutes and grand gestures I could participate in! (Side Note True Story: my best friend wooed his fiancée in part with a series of hand-drawn pictures of water towers because she mentioned once that she really likes water towers. He got her a “bouquet of towers”! *sigh* Dammit, I wish I could draw.) Alas, I don’t have the light touch or the eye for detail or the instincts to do anything more than one-dimensional cartoony stuff. And I don’t have the visual imagination to make the one-dimensional cartoony stuff funny or insightful or original in any way. I can really just trace Kamo-style little nothings. And, as previously discussed, why on earth would you want to do that?

So that’s today’s pathetic revelation: I can’t draw. It’s better that I face it now, after a mere decade or two of delusion that, if I really set my mind to it, I could recapture the artistic excellence I experienced in elementary school when art class was all about colouring in the lines and not hogging the red crayon (okay, fine, I hogged the red crayon). I’m going to give these books to my mother and move on. I don’t need to be a person who can draw, I can be a person who does other things. I bake a half-decent brownie, maybe I’ll focus on that.