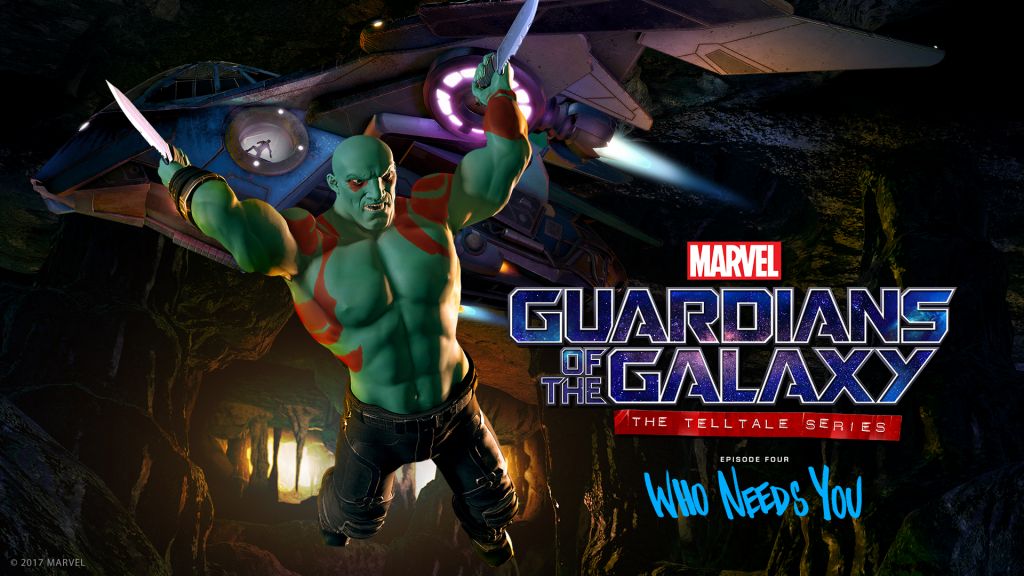 Guardians of the Galaxy, Ep 4: Who Needs You

Guardians of the Galaxy Episode Four: Who Needs You has a serious identity crisis going on: at first, it seems like one of the most legitimately episodic adventures do date, with our heroes trapped underground and on the run from rock-eating space worms. While the change in scenery from temples was nice, the scenario felt pretty disconnected from the main plot and while a decent diversion or standalone, at this point in the story and series it felt like filler.

But then people started dying. So far, Guardians done a great job instilling the player with the burden of responsibility that Peter Quill feels to keep his odd little family together and while that tension continues to build early in this episode, consequences start stacking up, leading to an ending for me that featured two Guardians dead and two having quit the team. When this side of things kicked in, I was riveted, night-and-day from the ho-hum proceedings of the first half of the episode. We also get an awesome look into Drax’s life before he became ‘The Destroyer’ and get the chance to help raise his daughter, which is legitimately heartbreaking and pays off nicely on the Drax arc to date. Ultimately, Who Needs You does escalate things nicely heading into the finale, I just first the first half of the episode hadn’t felt to unnecessary.

The villainous Hela having now merged with the broken Eternity Forge (and blaming you, of course) attacks, leading our heroes to fall into a cavern where we will spend the first half of the adventure, following either Rocket (who continues to be unreasonable) or Gamora, who blames herself for the damage Nova took last episode, which thankfully is as bad as it looked, despite her assurance that “I’m fine” – last episode I took that to mean that Nova can continue to be damaged without consequence…not so!

I went with Gamora and Groot, which led to a vaguely amusing, but mostly dull scene with Groot tripping on spores and refusing to help you solve a basic Groot problem of knocking over the heavy thing. With Gamora pouting in one corner and Groot high-out-of-his-mind, Peter is left to literally look at everything in order to solve the puzzle; it’s the game at its worst, unfortunately, as the player just clicks until they win. Around here, I was genuinely concerned that the Guardians games had lost their way – episode four in a Telltale Series is usually a crazy escalation, but here we seemed to be doing more of the same.

Things pick up with a fun nod to Dune that has players walking slowly and without rhythm so as not to disturb the worm before leading to a neat variation of the jet boot puzzle that has Peter flying in limited bursts to various things floating in a giant worm’s stomach. The Guardians can’t escape without emptying the Milano of their personal effects and it has naturally led to conflict aboard the ship. Further complicating things, depending on your decisions, is the state of Nova, who in my game I allowed to die as per her wishes. It’s a bold, powerful end to that plot and pays out in a way only a limited series can (as seen also with Batman, Telltale has liberty to kill and maim in a way established film franchises can’t). It’s a great scene, followed by an amazing fight to a Queen song (always the right call) that yet again has the full team under the players’ control. The daring escape is not without cost of its own, with Drax offering to go full ‘Matthew-McConaughey-in-Reign-of-Fire’ on the pursing giant worm to allow the crew to escape. I helped him and it was epic and sad and lovely…Gamora hates me for it, but it felt like the right call (yet again, everyone is entirely selfish and focused on their own point of view, both demanding that as leader you protect and lead, while also condemning every decision you make. Which is a pretty decent simulation of leadership, actually…)

Whether Drax is perma-dead or just ‘jumped off-screen and we left him behind meaning he can come back at a key moment’ dead is yet to be seen, but it was a great sequence, particularly following the scene with his daughter earlier. Either way, for the purposes of this episode, I felt the full force of my choices, which is the real, horrible joy of Telltale Games and with Hela blowing up a planet it’s time to get back to work.

What began with me questioning my interest in continuing to play built into something very compelling and engaging; I’m really excited to see if and how I can reunite the team and am glad to have paid the emotional cost of my decisions in a much bigger way than I thought the game would allow. That being said, the disjointed nature of this episode speaks to the problems with the series on the whole, which has not been able to disguise repetitions (temples, temples, temples) or evolve it’s basic exploration structure (aside from the stomach sequence) beyond ‘Peter hovers around a small area and clicks on things.’ Given the variety and scope of both The Walking Dead and Batman, this is a bit disappointing in a game that can literally travel anywhere in the galaxy.

I won’t stop believing just yet…I owe Nova and Drax that much.