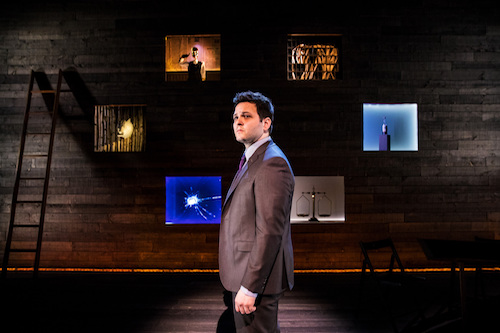 Magic Off-Broadway: In & Of Itself

In & Of Itself, currently playing at the Daryl Roth Theatre until the end of 2017, may be the smartest, most surprising, and most personal show that I have ever had the privilege of seeing, or more appropriately, of being a part of. Members of the audience are participants, to varying degrees, just as much as they are observers. The audience’s unconventional relationship with the show is reflective of what makes In & Of Itself both brilliant and difficult to describe. One cannot use a single term to classify it without being pejoratively reductive which, really, is the point. The show revolves around the nature of identity, transformation, authenticity, and the dependence of truth and judgment on context and perspective. Like each one of us, In & Of Itself is more than any one thing. The show asks that we do ourselves the favor of not limiting what it is and, consequently, not limiting ourselves in what we are.

Most art originates with its form inherently decided upon; an artist chooses the type of thing he or she wants to create, and subsequently chooses what it will look like. For instance, an artist chooses first that they would like their art to be a painting—or a song, or a play, or a novel—and then they decide what to paint. However, an artist can conversely let how the art looks be determined by what the art has to say; the art can conform to its message rather than the message be constrained by the chosen form. In & Of Itself has the boundary-defying hallmarks of art whose form is born out of its message.

In & Of Itself is theatre, yes, but that isn’t a sufficient description. It is not a magic show per se, but Derek Delgaudio is certainly a world-class magician. The show is not about the magic. The magic is used in the same way that language or music is used in theatre: as a supportive device to tell a story, to make a point, to open us up and make us feel. In & Of Itself also benefits from the simple strengths inherent to telling a true, personal story. It has the ability to penetrate our skepticism and engage us in a way that only a person speaking honestly about his true experiences and reflections really can. With his choice to let us in on some of the intimate and impactful experiences that have made him who he is, Mr. DelGaudio transfigures himself from merely being a performer on a stage into something far more real and moving: a human being emotionally exposing himself for the sake of understanding. It is a level of vulnerability that feels both courageous and admirable. In & Of Itselfis proof of psychologist Carl R. Rogers’ assertion that “what is most personal is most universal.”