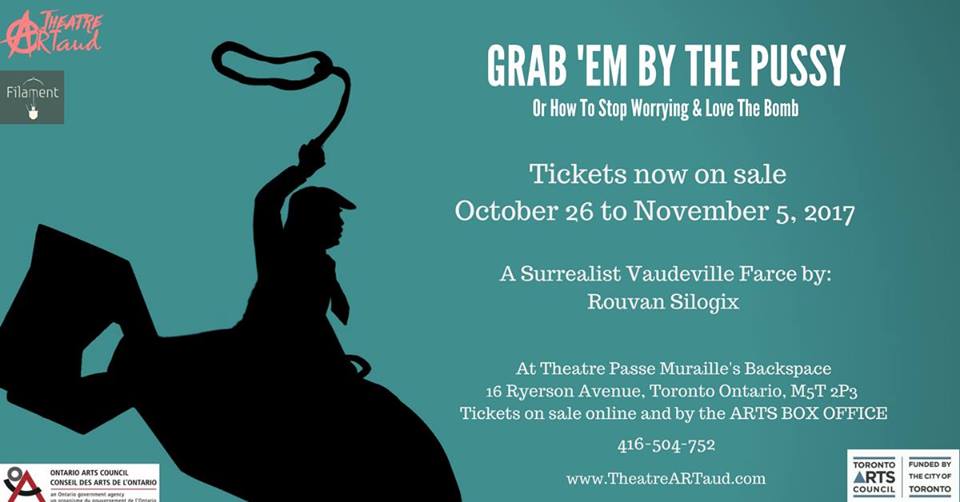 Described as “A Surrealist Vaudeville Farce”,  the fabulously titled “Grab ‘Em By the Pussy” or How to Stop Worrying & Love the Bomb is the troll-baiting, expectation-defying, ground-breaking new work currently taking over the TPM Backspace. We caught up with writer/director Rouvan Silogix to get a sense of what to expect from this second show in the new Filament Incubator season.

Give us the short pitch- what is Grab ‘Em By the Pussy about and why should we see it?
Grab ‘Em… is an anti-Fascist, anti-Misogynistic, Surrealist Vaudeville Farce that’s not really about Donald Trump. Rather, it’s about 120 million Americans who voted for him, the millions in the UK who voted for Brexit, and indeed the rising White Supremacist Fascism that’s increasing in popular support around the globe – including the white supremacist rally outside Toronto City Hall that occurred the other day. Aside from the hilarious and blunt content – the artistic form – i.e. “Surrealist Vaudeville Farce” is original in and of itself. Also, we have a Second City vet in our show, along with a wild ensemble that features violinists, tap dancers, a contortionist, acrobats/gymnasts, an opera-singer, clowns, and of course, a healthy dose of Nietzsche.

Where did the idea for the script come from?
I wrote this because I was scared. Because I was outraged. I’m Brown. I’m Muslim (but not really). Why are white supremacists, neo-Nazis, fascists gaining popular support – In America, The U.K., throughout Europe. I like to believe that people don’t want to join the KKK. That someone, who is living a decently happy life, doesn’t chose to turn to hatred, racism, sexism and violence. I also don’t believe that these things start or happen “out there” / “away where crazy people live” / “rural places in the middle of nowhere” – but rather that they start “right here, with you and me”. This piece delves into Thus Spoke Zarathustra by Nietzsche, and tries to ask the question – who is really the “monster” – Dr. Frankenstein, or the Monster he created.​

Your social media promotion of the show has attracted some pretty interesting feedback from Trump supporters. How have you approached dealing with that and what have been some of the most memorable exchanges?
Hah! There have been a few – honestly half the time we’re debating whether they’re parodying Trump, or are genuine supporters – however I would like to point out in the immediate aftermath of Trump’s election victory in Toronto – I came across groups of Trump Supporters at bars / cafes / workplaces practically everyday. I don’t think this is “just an American issue” or just a British/European issue – the threat exists in Canada as well. In larger metropolitan cities like Toronto / Montreal / Vancouver it’s less prevalent (as is the case with London / NY / Los Angeles) – but even then as demonstrated by the white supremacist rally outside Toronto City Hall the other day – we should all be worried.

Ok, Brass Tax: where/when/how much are tickets?
Show runs Oct 26 – Nov 5 – at the Theatre Passe Muraille Backspace – and we have a number of matinee performances. Tickets are PWYC starting at $15 – we appreciate the generosity of all those that have purchased higher priced tickets as donations to the anti-fascist and artistic cause. Tickets can be purchased HERE.

What else do we need to know about the show?
It is a farcical comedy – with a violent, surrealist twist. It is NOT an episode of SNL. Everyone who has read / seen parts of it says that there’s nothing like this in Toronto – and we like to believe anywhere else either.