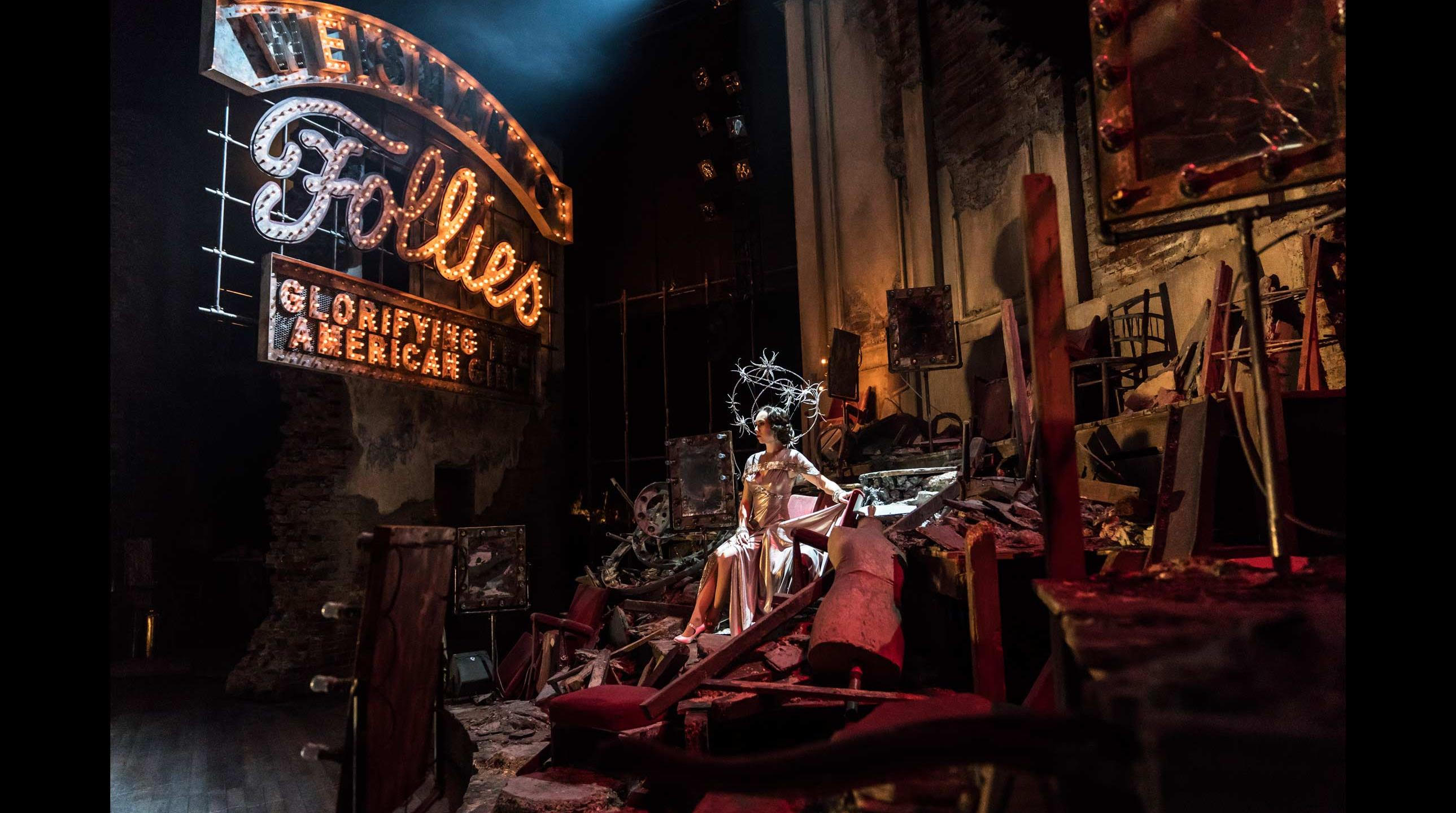 Follies is, in one way, exactly what you might expect from a 1971 work by the noted musical dramatist Stephen Sondheim, in that it’s a true spectacle, with lyrics that bounce effortlessly off its superb score, and huge, colourful and bombastic set-pieces that leave the audience in awe. On the other hand, the latest revival of Follies at the National is something I didn’t quite expect. Regret, heartbreak and longing are paramount themes throughout, with outstanding performances by its stellar cast that elevate this production to an outstanding degree.

Set in a New York, 1971, Follies follows a reunion of a set of former ‘Follies’ — chorus girls who would entertain pundits in raunchy and extravagant performances between the two world wars. Around the eponymous theatre, now dilapidated and soon to be demolished for the sake of a new office building, the story centres on two such chorus girls, Sally and Phyllis, and their husbands, Ben and Buddy, as they nostalgically reflect on the past, what could have been and what can still be. Flanked on-stage by past versions of themselves dressed in grey, Follies explores ideas of self-delusion, the meaning of ‘love’ and the hurt of looking back. If this is all sounding rather bleak, then not to worry: these dark themes are interspersed with stylistic and grand performances in the style of classical musicals, reflecting the theatre’s past. Offering a means through which characters can express their innermost feelings, these productions also offer a respite to the rather dark ideas at play here, providing some of the most memorable pieces of this musical.

Any notion that Imelda Staunton isn’t as brilliant as everyone says is worth nought here. As the emotionally charged and devastated Sally, she delivers heartbreak and tenderness in pieces such as ‘Losing My Mind’, which show why she is so well revered, as well as very much holding her own in the chorus pieces, such as the excellent ‘Who’s That Woman?’, wonderfully led by Dawn Hope’s Stella. Philip Quast and Peter Forbes also deserve mention for their respective roles as Ben and Buddy. Quast shows a complex, divided character in songs such as ‘The Road You Didn’t Take’, while Forbes is effervescent in pieces such as ‘The Right Girl’. Vicki Mortimer should also be credited for some of the best set design I have seen in a musical. Making use of the relatively small space available, Mortimer’s exposed-brick sections of a torn-apart theatre reflect perfectly the tones of decay, faded facade, strained relationships and nostalgia that the production has as its core themes .

If I had one criticism of this production, it would be that the playing-out of the past and present in the same space and at the same time can sometimes lead to confusion. Additionally, a general criticism of mine of Sondheim is that the narrative sometimes gets a little lost for the sake of a large company performance. This does not necessarily become a big problem in Follies, since these performances are just so good. It does, however, add to the previously mentioned confusion at times.

Nevertheless, Follies is a remarkable revival not seen for some time. A strong book and lyrics amplified immeasurably by outstanding performances, innovative set-design and an emotionally connective narrative, it’s an intriguing investigation into the past, coming to terms with your own failings and the nature of long-term relationships. Sensational, and a real treat.