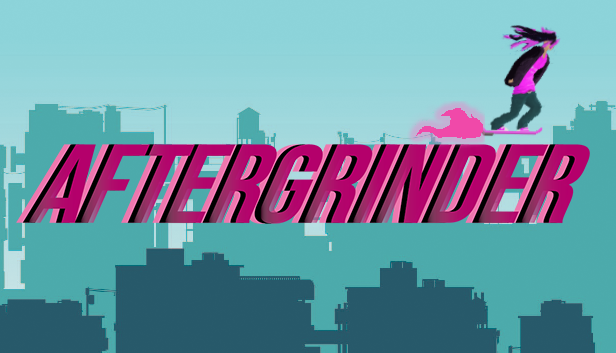 2003 was a pretty magical year for early online gaming: with the advent of Flash sites like ebaum’s World and NewGrounds.com, suddenly computer class went from being somewhere ICQ and MSN Messenger were banned to an arcade. I got addicted to Jet Slalom, a game where you maneuver a hover speeder between triangular cones, as it grows increasingly quicker.

But it became almost meditative. I hadn’t played a game like that in a long time until AFTERGRINDER came along and having died a multitude of times in it, I’m happy to report that AFTERGRINDER will scratch your itch for quick-action, fast reflex, oddly meditative games. And it’s got great style and attitude to-boot and allowed me to re-experience a style of game I hadn’t played in years.

AFTERGRINDER opens with a few quick quips about how hard the game is, how much you’ll die, and how you shouldn’t care about the plot: your boyfriend is in distress, you’ve got to go save him by hoverboarding to downtown…then the game basically shrugs and asks you why you’d care. Despite their cavalier attitude, the designers did make a solid choice in making the main hero ‘The Lady’ (you unlock ‘The Dude’ if you die too much. I unlocked The Dude within about ten minutes, grinning the whole time.) Then you’re launched into the game. It’s got a great, neon visual style, as you speed to the right of the screen, only being able to boost, duck, and flip from ceiling to floor to avoid obstacles. Mechanically, the game actually reminded me a lot of the mine cart levels of Donkey Kong Country: you’re moving so fast you can only really react and slowly memorize the level by repeatedly dying. The game gleefully tracks this, though at no point did I feel like the game was laughing at me, but rather along with me. It feels a bit like a friend laughing at you bailing hard in a Tony Hawk game or somesuch: the game requires deaths to learn and the snarky achievements and tone feel oddly supportive.

You’ll still swear, don’t get me wrong: the game is frustrating, but in a fun, ‘rage quit’ kinda way; you can drop in and out very easily and I found myself coming back to it frequently.

The game also layers on several new elements as the worlds progress, everything from beam weapons to fields that reverse your controls (and no matter how consciously you know it’s going to happen, you can still choke…trust my triple digit death count on this…) The game ramps up properly, though, allowing you to learn the mechanics piece-by-piece before throwing them all at you. It never stops being hard, but it does keep it fair.

Ultimately, I would again point to the Mine Cart levels of Donkey Kong Country as a benchmark for whether or not you’ll enjoy this game: it is damn punishing, but also satisfying, when you find yourself in the zone. It’s not for everyone, but I appreciate how up-front about it the developers are. If you enjoy a fast, twitchy, reflex game with style to spare and are a glutton for punishment, you’ll have a great time with AFTERGRINDER.

Just don’t throw your controller or laptop too hard when it kicks your ass.