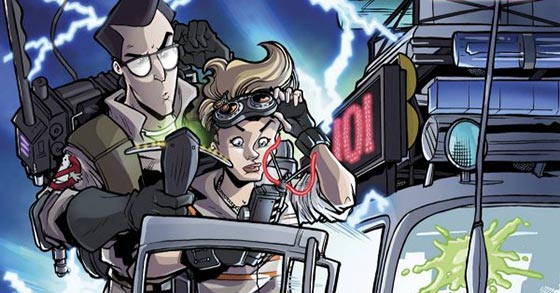 One of my earliest memories is Ghostbusters. To this day, I can’t tell you when I first encountered the film or the cartoon (The Real Ghostbusters, none of that Gorilla with a net nonsense from Ghostbusters), but pretty well since I can remember, I’ve loved Ghostbusters. When I was little, I wanted to grow up to be Egon Spengler, Harold Ramis’ character, to the point that I was looking at being either a cop or a scientist, because those were the closest jobs I could imagine.

[Then I actually took science and realized I’m more of a Peter Venkman when it comes to the legitimate sciences.]

Whether to play Ghostbusters or Ninja Turtles was long a point of contention with my best bud Russ, until we both settled on Batman who defeated our bickering as handily as any villain he’s ever faced.

Oddly, this will become important later in the story.

Despite its flaws, I love the new film, too. I’d never imagined I’d get to see Ghostbusters on screen again and even with new characters, I felt the heart and (forgive the pun) spirit were there for the most part, and I want to be Holtzman almost as much as childhood me wanted to be Egon, which is saying something. It was surreal hearing the theme (the real one, not that bullshit Panic at the Disco garbage remix) again, but damn if I didn’t grin ear-to-ear when they walked into the fire station. Hell, even my WiFi is ‘ThereIsNoWiFiOnlyZuul’ (seriously).

But there’s trouble in Ghost paradise: the new film didn’t do well enough critically to warrant a sequel (a damn shame, would have loved to see that cast grow as an ensemble) and the future of the franchise is in question yet again. All of this is particularly troubling given Ivan Reitman’s announcement of Ghostbuster Corps, a production company dedicated to creating a shared Ghostbusters universe (long the goal of the original films)…where do we go from here?

Well, Comic Con provided some answers, some questions, and a big ol’ shining ray of hope.

Ghostbusters 101 primarily centred around IDW Press’ various Ghostbuster comics; they’ve been writing new adventures for the original busters for some time now, even having them cross over with The Real Ghostbusters; but most recently, they’ve crossed over with the 2016 film’s universe, which is both a great chance to further explore the adventures of the new Ghostbusters and a chance to connect both franchises (the panel touched on how the more mythological approach of the original films will be crossing over into the new universe with things like Ray pointing out that simply destroying ghosts isn’t enough, as the ghosts will come back worse and angrier). With this comes the announcement of a new mini-series focusing on the new Ghostbusters (generally referred to as the “Answer the Call” universe, due to the film’s official title designation in film databases), written by the great Kelly Thompson and drawn by Corin Howell.

All this was neat, but to my great shame I’ve never read the comics (I plan to remedy this immediately). I was still wondering what was happening with the film universe. Then, three very odd things happened all at once:

First, Ivan Reitman let slip that there are two more films in development: one animated and one live, to coincide with the 35th anniversary of the franchise in 2019. This led to an interesting question from the audience about the Chinese market (that may actually explain the financial woes of Answer the Call): Chinese censors have dubbed ‘ghosts’ verboten and thus no Ghostbuster film has ever played on screen in China. As you probably know, the Chinese market is the key influencer of the film industry right now (looking at you, Transformers: The Last K-OH MY GOD WHO CARES) and not being able to take a big budget action-y movie over there is disastrous (to that point, Reitman coyly said they were working on re-defining the nature of the ghosts in order to tap the Chinese market). Nevertheless, there are two films coming, one of which apparently focuses on the ghost’s POV of the Ghostbusters universe, which sounds neat.

Second, halfway through the panel, a little girl and her mom came and sat next to me, and that little girl stared transfixed through the rest of the panel. The way I would have. They talked, briefly, about how the women of Ghostbusters have always been important to them, one of the writers of the comic admitting that Janine has always been his favourite hero of the franchise, as she’s the only one who keeps the whole team together, but I don’t really think the old Ghostbusters mattered that much to this little girl. Who mattered were her Ghostbusters: Patty, Abby, Erin, and Holtzman. And dear, sweet, dumb Kevin (whose mere mention elicited cheers, proving that even the minor characters from the new movie have sunken into the fan consciousness). But she stared at the images of the new Ghostbusters on screen with the same awe I would have, twenty something years ago. And I must say, there are few things as amazing as seeing a new generation care about something you’ve cared about. This seems to piss a lot of fans off, hell given the right circumstance it pisses me off too (looking at you, current seasons of The Simpsons), but loving a franchise, film, or character that only lives as long as you do is pointless. I’ll always love Egon, Winston, Ray, Peter, Janine, and Slimer, but that’s because I love the Ghostbusters. Maybe one day that little girl will see my film and dig it. Maybe she won’t. Either way, we were both sitting there gleefully listening to news about what the Ghostbusters had done and what they might do in future. Whether or not they ever make another movie in the Answer the Call universe, it was worth it if that little girl saw herself in those characters and her imagination was fired up to go bust ghosts. And that’s pretty cool.

But finally, there came a part of the panel that dropped me right back into what that little girl was feeling: it touched on a comic, the Ninja Turtles/Ghostbusters crossover (which I’d never heard of) and announced its sequel, pointing out that the teams are very similar (New York based, similar personalities and specialties). Then they announced Ninja Ghostbusters: a toy line that combines the Turtles and the Ghostbuster they most resemble (some interesting choices there…Venkman as Michelangelo? Raph as Winston? I have so many thoughts and questions…) Suddenly, I was transported back to childhood, with a hilariously simple solution to Russ and my childhood quarrel staring me in the face: we didn’t need to choose between Ghostbusters and Ninja Turtles…we could easily have done both. It was an entirely surreal solution to a decades old problem of little import, but it made me smile. And ultimately, I think that’s why we’re fans: we still feel for these things, even years later. Hell, we could have just combined the two, as the hopelessly out-of-touch Mattel rep (“And this cute, hungry, Slimer-type ghost character!” …it’s Slimer. SLIMER. The most famous of all-oh, never mind.) pointed out.

And you can be goddamn sure I’m pre-ordering one. Who knows? Maybe when my future kid plays with his future kid, it’ll solve the problem. In the meantime, I’ll look at it, think of a dear friend, and smile.