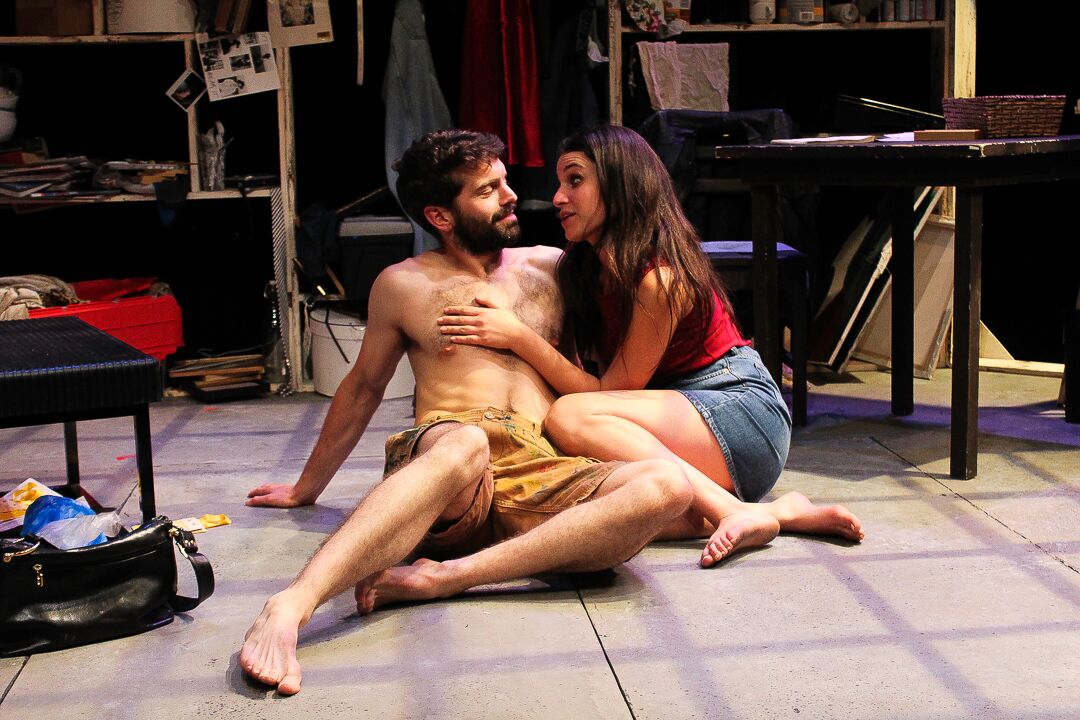 Produced and presented by Libby Brodie Productions, Permanence is an hour long emotional tornado. And I mean that in a good way.

Written by Cyd Casados, the play depicts the relationship of Steve (Ludovic Hughes) and Rebecca (Samantha Michelle) – an English painter and an American doctor, respectively. Their affair starts of heatedly in Steve’s cluttered bohemian apartment, and continues, despite the ensuing emotional turmoil, when Rebecca declares that she will never be monogamous.

The relationship traverses a complicated path during which time Steve falls in love with Rebecca, or thinks he does, and attempts everything from whining, cajoling, and attempting to manipulate her into monogamy. She adamantly refuses, claiming that her lifestyle choice is about autonomy and self-possession, but her downfall arrives in the form of a letter that indicates that her attitude towards sex is perhaps a little darker, a little less healthy, than the ideals she spouts. As she transitions to a new lifestyle (which happens a little too easily, to be honest), they become closer in some ways, but the disconnect in their intimacy become more and more apparent.

In short, this is a complicated mess of an affair, and importantly contains a lot of nuance in the small reversals and shifts within the relationship that relies on a controlled and focused performance to pull off. Hughes is extremely centered, and despite beginning the show entirely naked (which I was ‘warned’ about as I walked into the theatre) – I found his nakedness in no way uncomfortable or annoying because of the ease in which he inhabits the scene. He is also, it must be said, is incredibly consistent in this show, and it’s more the reversals in his character that I registered as significant to the narrative. By the end of the show we see that despite their non-monogamy, Steve has found another way of being controlling, which is both subtle and powerful. The character of Rebecca is darker, and more confusing, and it wasn’t clear to me if she’s not as developed in the script as she might be or if the portrayal of her in this show wasn’t quite what it could be. Michelle wasn’t as dropped into the character as I would have liked, often sighing before a line, and despite the obvious experience her bio details, it comes off as a tad emo and amateurish.

The set is detailed and beautiful, coupled well with colourful lighting (which adds dimension but is not, thankfully, overdone). I was a big fan of the scene changes, which kept the pace and tone of the show going and included loud clips of pop songs, often thematically related to the scenes directly before and after (though the transition that used Haddaway’s ‘What is Love’ was a little, uh, on the nose for my taste.) Overall the show is well designed and performed, offering up a window into a toxic version of non-monogamy, one that asks important questions about the distance between the narratives we tell about our lives and those that we actually inhabit.