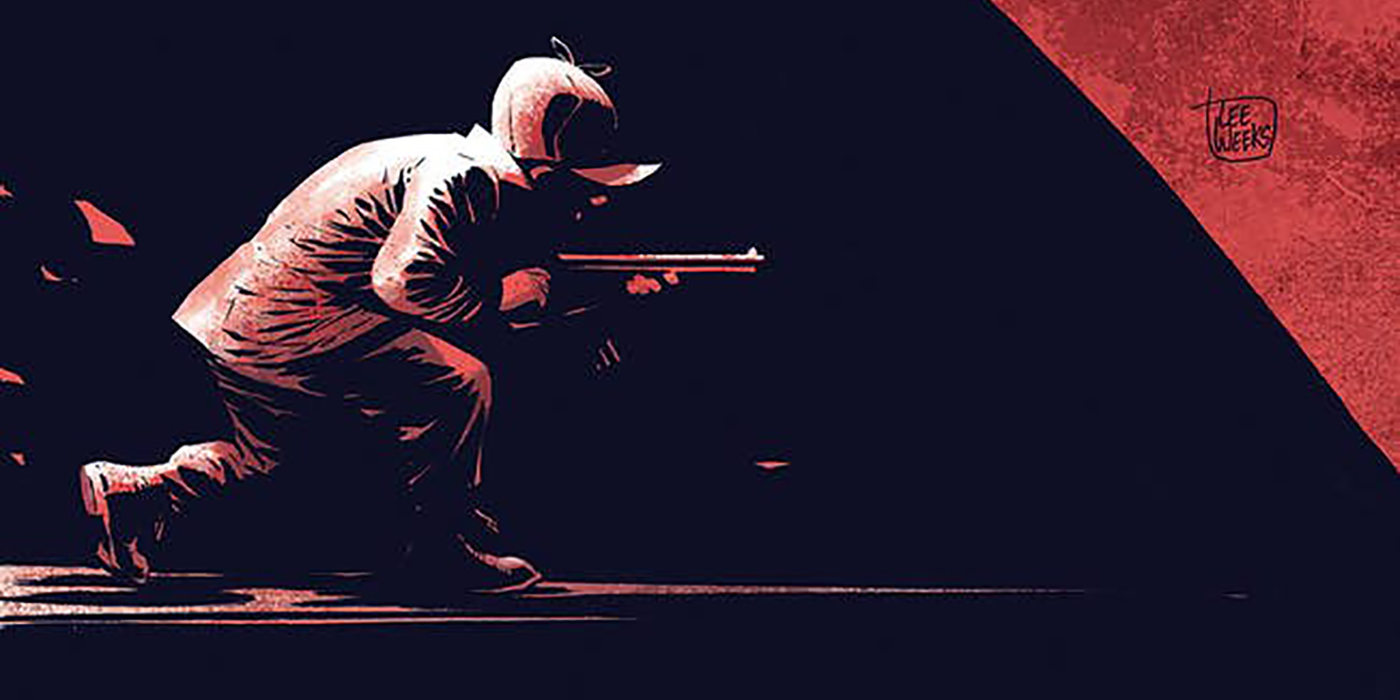 Batman/Elmer Fudd: The Crossover You Didn’t Know You Needed

You probably didn’t think you needed a gritty, hard boiled, noir Batman story about Elmer Fudd teaming up with Batman to take down Bugs Bunny…but I’m here to tell you: yes. Yes you do. This month, DC has been running one-off crossover issues, pairing Looney Tunes characters with their closest DC counterparts. This has led to some fun team-ups (Marvin the Martian and Martian Manhunter discussing the nature of humanity; Jonah Hex and Yosemite Sam are stand-outs), but the real surprise of the lot is Tom King’s Batman/Elmer Fudd, which is so patently absurd that it almost defies belief that the story exists, let alone is great. But as with his main run, King incorporates an incredible understanding of what drives Batman and a remarkably clever means of ‘Gotham-ifying’ the cast of Looney Tunes, to create a funny, clever, engaging Batman story that – against all odds – stands as one of the best stories I’ve read about the Dark Knight.

The issue follows Elmer Fudd, a broken-hearted assassin who’s girlfriend Silver St. Cloud (a frequent Batman love interest) has been killed by Bugs ‘The Bunny’, another hired gun. He sets out for Porky’s bar with revenge on his mind, narrating our story with his trademark speech impediment, only to discover who took out the hit on St. Cloud: Bruce Wayne. What follows is a battle between Batman and Fudd (where even Fudd’s sound effects mirror his voice; *PWUNCH* etc) that leads to a team-up, as Batman and Fudd take on the entire Looney Tunes universe in Porky’s. This summary really doesn’t do the issue justice, but half the fun is seeing and discovering what the Looney Tunes characters look like through the lens of Gotham. Fudd himself is an improbably great noir character; I found myself thinking I was reading an issue of Frank Miller’s Sin City or Ed Brubaker’s Criminal at times, as King paints a fascinating picture of a simple, broken man, who is both familiar and new. His use of the conventions of the Fudd/Bugs dynamic are also absolutely excellent – similar to Roberto Aguirre-Sacasa and Francesco Francavilla’s take on the Riverdale gang in Afterlife with Archie – you’ll find yourself smiling at the ingenious and surprising ways King evokes nostalgia while still driving the story.

For his part, Batman is the least interesting part of the story, but in a really healthy way: there are a few really good stories where Batman lurks in the background, rather than the foreground (think Gotham Central or Joker) and he fits this really well as a supporting crossover character. It’s easy to lean on Batman to make a story interesting, but instead King allows Batman to augment the story and still get some great moments (particularly near the end, when we get another brief glance into the emotional life of Bruce Wayne).

Visually, the story is a joy, packed with detail and easter eggs for keen eyes. Weeks’ style is perfect for Gotham and his designs of the Looney Tunes characters are delightful (half the fun is guessing who is who). It would have been easy to cut corners on the visual style of this issue, given the subject matter, but Weeks and Kindzierski commit just as hard as King to taking the material seriously and the result is an issue that looks and feels like a classic noir tale. The action scenes are particularly notable; highly dynamic and clever in their framing and execution.

It’s all-too-rare to find an excellent one-and-done story in the big super hero comics, these days, but to my surprise and delight, Batman/Elmer Fudd does exactly that. You don’t need to know anything about what’s going on in comics, only a knowledge of Looney Tunes and the desire to embrace the inherent silliness of the premise, and you’ll find yourself with a gem of a noir story, that will have you chuckling the whole way through.