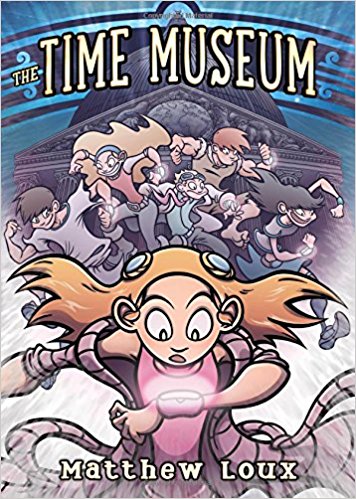 If you’re looking for an all-ages comic that combines humour, heart, history, and adventure, then look no further: The Time Museum is an absolute delight from start to finish, and while it hits many of the familiar beats of the ‘young hero attends fantastical school/camp/institution’ genre, the characters, style, and concept are so utterly enduring that the you hardly notice. In short: The Time Museum is a great graphic novel that manages to evoke the best of the genre while still having a unique voice of its own. If you love adventure, you owe it to yourself to give it a read: it’s like setting out with an old friend.

The Time Museum by Matthew Loux follows the story of Delia Bean, an academic misfit excited to spend the summer with her adventurous Uncle Lyndon, who shares and encourages her passions. Like so many of her predecessors, she stumbles upon her Uncle’s secret: he’s actually a time traveller and curates The Earth Time Museum, which serves as Earth’s central museum for all time periods, hosting species from across the universe. Delia discovers that she’s been chosen to compete for an internship at the Museum, alongside other teens from various time periods: a Scottish mean-girl (think Brave’s Merida with more attitude), a Roman athlete, a future Canadian scholar, an (admittedly very smart) Neanderthal, and her best friend Michiko from Future Tokyo. The characters all very quickly emerge as interesting and multifaceted, quickly shedding their archetypes. Almost without fail, Loux makes the right call when setting up relationships and conflicts; where many writers feel the need to throw constant conflict at their heroes, Loux allows them to form bonds, relationships, and work together. His characters have heart, are compassionate, and support each other – even when competing, which sets a really pleasant tone for our adventure.

The adventure comes in the form of three trials in three eras, everywhere from the age of the dinosaurs through to future London and allows lots of opportunity for wit and fun. There’s a really active Indiana Jones vibe to these stories and if, like me, you’ve been missing that sense of curiosity mixed with adventure, it’ll feel like coming home.

Guiding them are the equally eclectic staff of the Museum, including a gregarious knight, and android librarian, and a giant brain, all of whom add colour and variety, without overshadowing the leads. There’s also a mystery building, as Delia encounters the enigmatic Grey Earl, a sinister Doctor Who that has motives at odds with the Museum.

The story is fun, quick, and incredibly witty; including all sorts of historical detail without overwhelming the reader with data.

Visually, Loux has a fascinating style, evoking the physics bending anatomical fluidity of Adventure Time, with characters that fall somewhere between Tex Avery and Kate Beaton. There are lots of beautiful details (the Museum is a joy) and odd, but fun, choices, like giving the Tyrannosauruses multi-coloured manes. It’s always a joy when an author and illustrator are one and the same, and Loux presents a perfectly unified style; quiet moments of intimacy and despair read on the drooping shoulders of a dejected friend read as clearly as Delia blasting a Silver Man street busker (it was for his own good), and betrays a deep understanding and execution both visually and textually of how to convey emotion, story, and action.

Having read the above, it should come as no surprise that I teared up a couple times, something I certainly wasn’t expecting from an adventure comic. The characters feel real, feel recognizable, and care about their world and each other; Loux’s command of empathy is one of his greatest strengths and adds tremendous depth to the story both visually and verbally.

Praise is also due to :01 First Second publishing, which has done a spectacular job with the book: the colours are brilliant, the pages are glossy and thick, and the book feels meant to last. It’s a minor point in the greater scheme of things, but with the bigger publishers constantly cutting costs and printing cheaper and cheaper feeling trade paperbacks and graphic novels, it’s a subtle, but effective, vote of confidence from 01 to say: this book has value and durability. You’ll want it to, because you’ll want to read it again. It’s gorgeous and particularly impressive for an all-ages comic (who are all-too-often victims of cheap, disposable printing).

My only issue with the book is the usual baggage that comes from ‘set-up’ stories; by the end of the book, the story felt like it had only just begun; but this is, of course, a minor quibble, as the only reason I was disappointed by this was because I WANTED MORE! Like, now. Please.

And, as stated above, the story does hit many familiar beats (I caught myself humming Hedwig’s Theme a few times), and while Harry Potter comparisons are almost inescapable in a story like this, I maintain this is how you do one of these types of stories right: Loux gives us interesting, deep characters and sets them loose. The framework is familiar, but the team isn’t and they’re engaging enough that our familiar surrounds don’t bother us. I’ll be very curious to see where volume two goes; now that we have our heroes, our villain (?), and the world, it’ll be telling to see where Loux takes it from here.

I’ll be sure to tell you the day it comes out, because if it’s anything like this, I’ll devour it in a sitting and be left craving more.