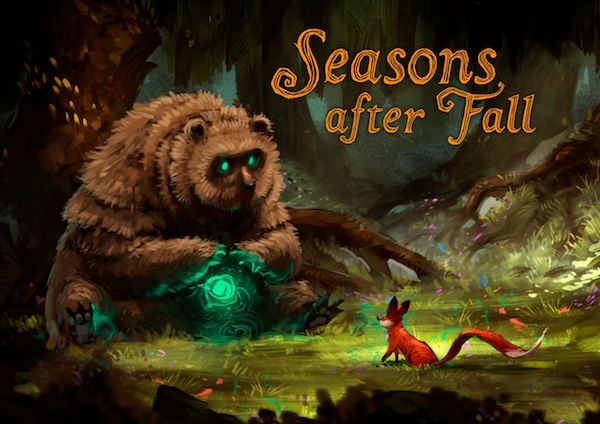 There are moments in Seasons After Fall, where the stunning, hand-drawn graphics and the breathtakingly beautiful score, performed by a strings quartet, where you find yourself marvelling at finding such beauty in a video game. While it is certainly more common to see such incredible design, what Swing Swing Submarine has accomplished here visually and tonally is a joy and I know I’ll return to the soundtrack often. Sadly, where the game falls flat is in the construction and design of some of its puzzles, which mar an otherwise lovely, gentle experience with old-school gamer frustration to the point that were I not reviewing it, I wouldn’t have finished it. It’s an unfortunate blemish and sadly one that repeats in several puzzles, which I’ll unpack below. But in short – Seasons After Fall is worth your time for it’s visuals, incredible use of music, and inventive mechanics (you manipulate the seasons to change your environment – ie. Using spring rains to make things grow, winter to freeze them), but comes with some truly frustrating puzzles that – by virtue of questionable design – really interrupt the flow and experience and may leave a bad taste in your mouth.

Seasons casts you as a spirit of sorts, that possesses a fox, one of the few creatures in The Forest, the world in which inhabit for the game, who is tasked with retrieving items from the various Guardians of the forest, each representing a season. With each new power, you gain the ability to manipulate the environment around you, with each season offering different abilities (you can freeze lakes in winter, cause trees to grow in spring, activate winds in fall, to name a few). This is a quick, easy mechanic to pick up and master, as you come to recognize the various pieces of the environment that will interact with your powers and it’s a testament to the design that Swing Swing Submarine basically had to re-design their levels in four states of puzzling. While you start out being led by a calming voice, she quickly turns against you and the Guardians, seeking her own freedom (she is a Seed, meant to start a new Forest elsewhere and is afraid of being abandoned – also has a nasty habit of killing animals by accident while playing with them). You are then sent on a quest to restore her sanity and set her free. The plot is light and a little less engaging after the shift to serving the Guardians rather than the Seed, with a lot of beats repeated, but in such a visually stunning game, the plot doesn’t need to be much deeper than that and it serves just fine.

Mechanically, things are pretty clear until you’re tasked by the Guardians to restore the winds and to re-activate the altars of the seasons. Here, despite the map essentially being four distinct locales that you visit (and re-discover with new powers) several times, things got a bit fuzzier. The nature of the game is that you can explore at your leisure, which didn’t serve me here as I revealed all the shrines then had to go back again to explore them, and here I found the lack of map a problem; despite clearing the game in two sittings, there were locations that I vaguely recognized but really had to search around to find again, which is always irritating.

And then there’s the altars. Some of these are lovely, clear puzzles, but two in particular drew my ire in a hard way: one involves the game’s most annoying mechanic, the other darkness. Just plain darkness.

The former involved a mechanic introduced early on as a way of moving rocks out of your way (*wink wink, loading the next area, wink*). There are three cicadas flying, with an electric line connecting them. The rock have a shape that you need to move these bugs into, which in and of itself isn’t that hard, but is slightly more time consuming than you’d think and even then felt like an odd thing for me to be spending time on. The why became clear later on, as in the altar inside the big tree, you have a huge chain of these bugs that you need to make into various shapes, each corresponding to a different season, while jumping from moving platform to moving platform. Here’s the thing: the game doesn’t really make clear what it wants you to do; if you seek around, you can piece it together, but after being pretty clear to this point, it requires a logic leap or two to get it right (as the incensed Steam user boards confirm). The moving platforms are an additional pain, not adding fun difficulty, but rather just straight-up frustration (particularly given that jumping feels a little float-y and imprecise). Once I’d solved the what of the puzzle, I found it extended by several minutes of slightly mistimed jumps. It’s an interesting concept for a puzzle, but doesn’t quite work. Incidentally, I’ve included the shapes you need to make at the end of the article, as they can be hard to find and aren’t pictured anywhere else online, inexplicably. Enjoy!

Now, let’s talk darkness. Each altar requires you to find several pieces of them to reconstruct them and release the wind within. Unfortunately, since I stumbled into the Obscured Altar first, I didn’t know that or what they were. This lead to about an hour of me running around in the dark, not knowing what I was looking for or where I might find it. I watched a walkthrough to help, around the time I was ready to quit and even that didn’t help, because they were ALSO running around in darkness. I’ve got nothing against limiting the field of vision for the player, but damn, this was a lot. I ended up cranking the brightness on my TV to maximum and literally jumping around every wall I could find until finally I hit the final piece. To re-iterate: it was just around. Just somewhere in the dark. Perhaps if I’d found other altars first and knew that’s what the mechanic was, this wouldn’t have been as frustrating, but as it stands for me, this was my ‘I’ve enjoyed the game to this point, but this is bullshit and I’m done’ moment. Unfortunately, it tainted the whole experience for me.

So, with all that in mind, again, the score is a joy; it changes based on puzzle, season, and when it’s on elevates the experience by quite some. The graphics are lovely and it’s a design feel unlike anything else I’ve played (and also one of the first games I’ve played in ages that has no enemies in it…other than darkness and moving platforms, of course). It’s definitely worth a look, but I really wish the puzzles were as satisfying as the design.