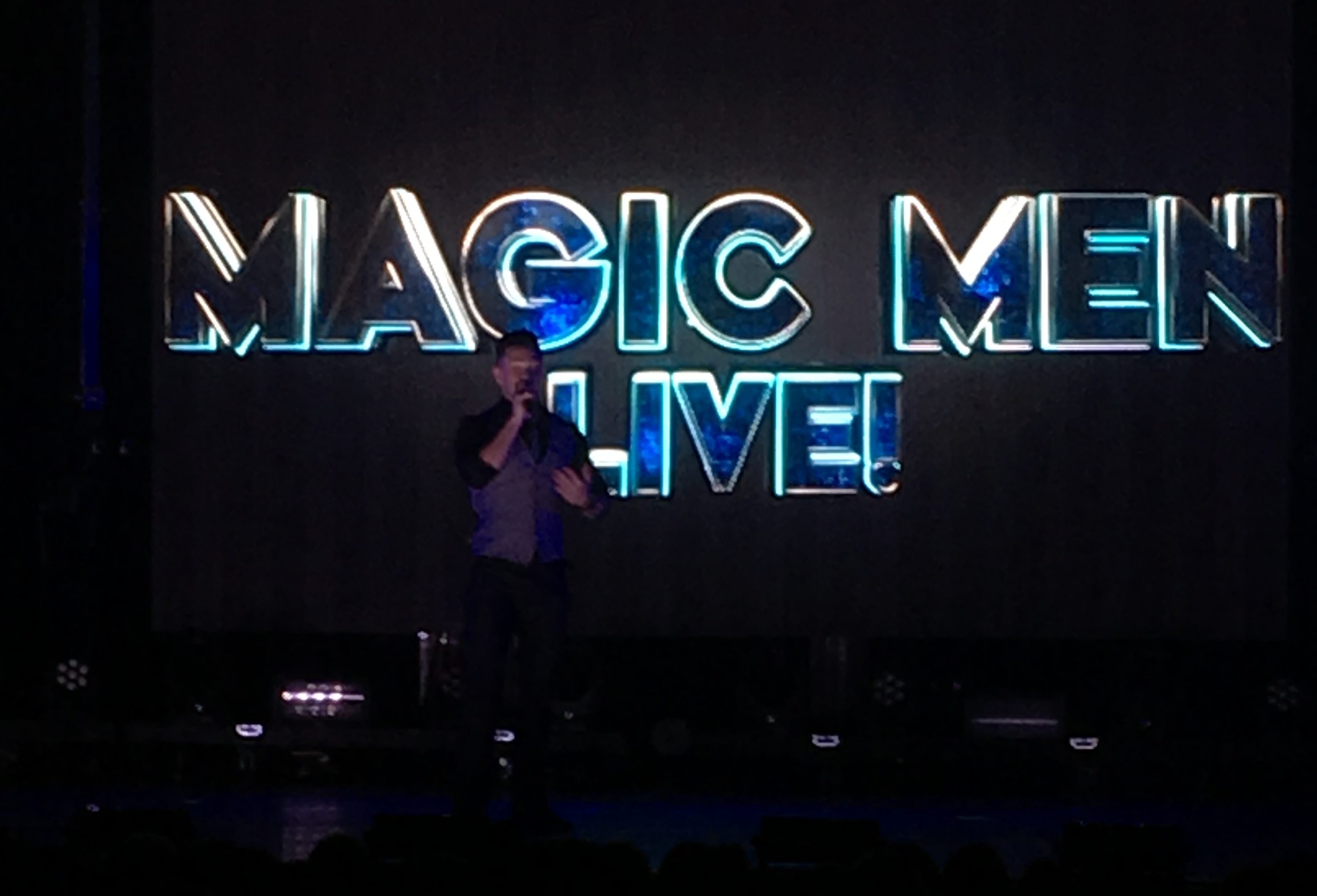 That Time I Saw Magic Men Live on Tour

I know, I’m as surprised as you. But listen, I enjoyed Magic Mike XXL (the original Magic Mike too but it was less fun and wanted to be too many things) and every once in awhile I get a weird 4am burst of personality-abandoning “to hell with it” courage and decide to do something truly ridiculous like reply to a press invitation to attend and review the Magic Men Live touring show when it played Toronto’s Danforth Music Hall. And thus I found myself in a giant crowd of ridiculously loud women, clinging to my friend Tessa- the similarly reserved but rewardingly open-minded single female friend I dragged with me on this adventure- eating M&Ms we snuck past security and sipping cider like my sanity depended on it. Ask literally anyone I went to university with- I am not the right person for this assignment.

“Okay, square, then why did you like XXL so much?” I hear your call of inconsistency, but these are two different things. Not only does the movie exclude the mob of obnoxious women screaming in your ear, Channing Tatum (or, more importantly, Matt Bomer and tWitch!) is safely on a movie screen, not in your face. He’s also not that guy (or at least he isn’t that guy anymore). It’s like the difference between a rock concert and Rock of Ages– the Magic Mike movies are a bunch of clean cut Carnegie Mellon grads on a fun make-believe assignment; Magic Mike Live has a cast of dudes who literally decided to be strippers. Like, as a life choice.

That said, the best thing that Magic Men Live– and, from what I understand, most male strip shows- has going for it is a general lack of sadness. Being a male stripper has a lot more to do with learning choreography and avoiding carbs than it does grinding awkwardly on a pole while middle-aged men eat chicken wings. So, while I’ve definitely got a mental block on actually being attracted to someone who might ever be a candidate for the Magic Men Live gig, at least I don’t feel sorry for them. I may be way off base but it seems to me that these are dudes who thought this would be a fun gig rather than a last resort. That distinction makes all the difference. There’s a joyfulness to Magic Men Live, a knowing silliness and sense of consequence-free fun that rides safely on the refreshing power dynamic that the vulnerability of nakedness is with the men and the women are doing the objectifying.

Here’s a clip of the opening number, for objectifying context:

Now, you may be thinking “those are some great abs!” and you’d be right. Some better than others, but generally you’d be right. You may, however, also be thinking “wait, is that guy off time” and the answer would be “yes, yes he is”. Cause the Magic Men Live strippers are, again, to reiterate one last time, Not Channing Tatum. They’re just a bunch of beefy dudes, and what becomes clear very quickly is that they’re gym-beefy not dance-beefy. Those ridiculous biceps on the ones who go by “the Country Boy” and “the Bad Boy” are not the same kind of ridiculous biceps you see on So You Think You Can Dance or at the National Ballet (I went to a ballet matinee the day I saw Magic Men Live and would like to take this opportunity to point out that, if you’re in the market to objectify some incredible male bodies, that’s the place to go). These are lifting weights biceps, not lifting girls biceps, and they actually slow the dancers down. Pretty consistently here, the bulkier the muscles, the worse the dancer, and there are some pretty terrible dancers on display (though there are a few good ones too- namely “Devon AKA DJ” and, my favourite, newbie Travis).

Most concerning is the repetitive jack hammering that characterizes their simulated sex moves. During the “go out into the audience to ‘dance’ with anyone who has a $20 bill” segment of the evening (also known as the “Kelly keeps her head down and avoids eye contact at all costs” segment of the evening), one of the dancers approached the woman seated in front of me and proceeded to execute a move so unsexily spastic that he literally had to tell her to “hold on to something”. The hooting and hollering around us suggested that Tessa and I were on an island all alone on this one but the only person in the show who appealed to us was the earnest steadicam operator who was tasked with following these guys around all night (he was reliable, intuitive, adaptable and approachable- that’s some real world sexiness right there). I got really excited when one of the dancers put on glasses for his faux-nerd “Netflix & Chill” routine (see clip below) but he was soon in leopard print undies and the appeal was, um, less.

I probably shouldn’t have gone to Magic Men Live. I enjoyed the Backstreet Boys routine on account of it being a Backstreet Boys routine but there wasn’t much else I got out of it other than a headache from randy woman screams and the opinion that some of these guys should really throw some Zumba in with their lifting routines. I went because people like to say things to me like “expand your horizons” and “why not try it just once?” and, if I go to the occasional “out of character” thing like this, they say those things less. I wasn’t much fun at Magic Men Live. I was skeeved out pretty much the entire time, sat with my arms crossed, and bobbed out of the way when one of the guys attempted to put whipped cream in my mouth (seriously, this is a real thing that happened!). It was not my thing; much as I like Magic Mike XXL, I maintain that the sexiest Channing Tatum movie is The Vow because he talks a lot and wears a pea coat. But all those women who were annoying me so much were Loving It and, noise level aside, I love that they were loving it. You go, ladies, and have your unapologetic grown-ass woman Jada Pinkett-style fun and turn the tables on millennia of female objectification. I’ll just stay out of it next time.