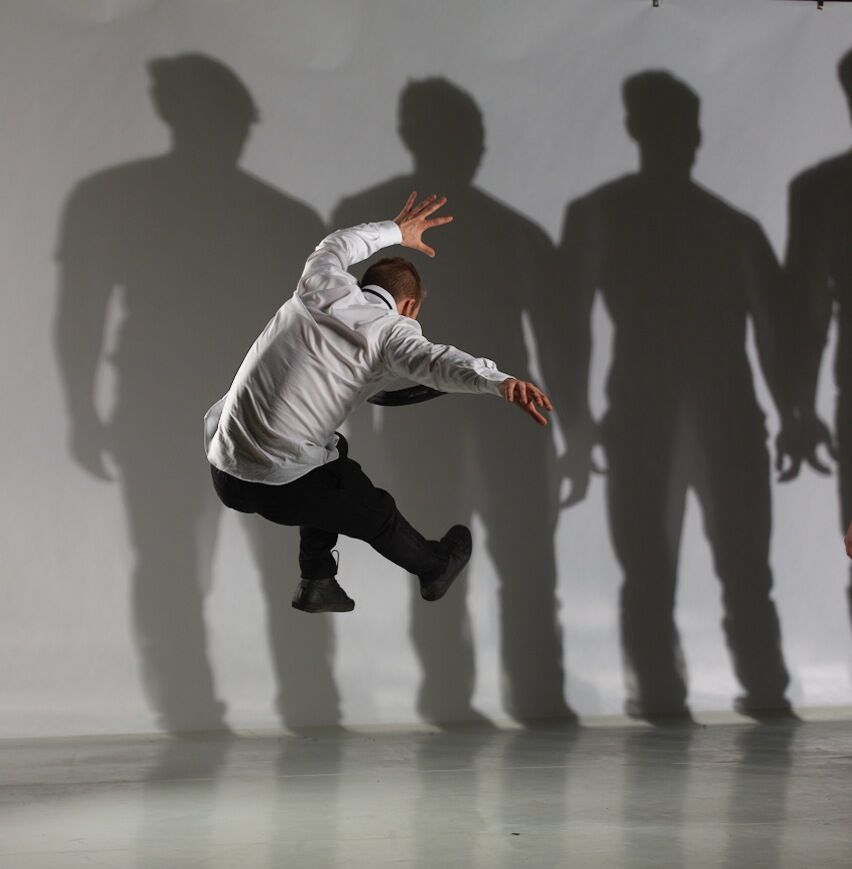 Glory, performed by Shay Kuebler’s company Radical System Art, hosted by DanceWorks at the Harbourfront Centre was a multi-media pleasure to take part in. The performance incorporated film in an interesting interactive manner which emphasized the longevity of the project: the dancers on stage were mirroring or taking part in actions played out, by themselves, on the video screen behind them. While oftentimes I find that cinematic effects fall flat in contemporary dance, Glory was successful in its use of the medium as it was fundamental to the themes and atmosphere Kuebler strived to create.

Glory is fundamentally about something that each of us can relate to: film and video games, technology, and a prevalence of violence in our culture and media. As stated in the programme, Glory is about society’s fixation with violence, and how it is pervasive and normalized in our cultural fabric. The concept and title of this piece was very intriguing. ‘Glory’ is most often defined as a great praise or honour, an ornament of pride, or a state of great splendour, magnificence, or prosperity. Commonly, however, I at least associate the word with a violent triumph, “the glories of war”, or giving someone a solemn ceremony for acts committed in a state of cruelty and brutality. Kuebler’s show strikes out to challenge these various conceptions, and it must have been an incredibly interesting journey for the performers to take part in. I was actually surprised with how lighthearted the show was at many points, and felt free to laugh, gasp, and fully immerse myself in the audience experience.

Beginning with a short homemade thriller film (thanks for that shot of adrenaline!), the audience begins to see that what is most gut-wrenchingly horrifying about violence is the fear of violence. Stalking, running, and hiding all stimulate the senses and nerves more than blatant frontal violence may, and the performers innately grasp this concept. The show continues to develop different types of violence, and I think it was the audience’s duty to figure out where we draw our own lines of what is acceptable; violence between a man and a woman, a group against an individual, or a domination scene that would remind any of us of an unpleasant relationship. Further along this journey of violence and power, we begin to see references to video games of the 80s and 90s. The dancers hovered, while waiting their turns to move in the exact menacing bouncing way that the characters do in Mortal Kombat. It was nice to see clear references to violent video games, as promised, and some moments had the audience in peals of laughter, such as when one of the dancers shimmied along the stage as if he were a 2D character moving up and down a vertical screen.

The array of dancers selected for this performance was perfect for its development. There was a trend for a variety of urban styles in their training, and seeing some acrobatic movement was an excellent way to emphasize the athletic skills of martial artists. Also, the dancers were all also wearing socks, a unique choice for stage. As with the multi-media aspects, this decision had practical gains. The dancers were able to run and slide along the dance floor in a way they wouldn’t be able to barefoot, and the results were effective in emulating the fleeing, scrabbling, slipping manner that one may use unwittingly to try and escape violent activities as quickly as possible.

I enjoyed how Glory revisited the same themes repeatedly, building them as they reappear. Some images bubbled to the surface and left me wanting more, and lo and behold, they reappeared. I appreciated the intelligent way the performance was structured as such, it became a much more unified whole than a piecemeal show about violence in different mediums. However, although each movement section was a short slice, they also somehow seemed to drag. I found myself wishing both that each section would be developed further and move along at a better pace. Perhaps the problem there lies in the choreography: such a clear idea and theme for a performance could have been reflected in the movements in a more direct way and would not have left the audience floundering. Furthermore, the musical selection did not add to the show, but seemed to take away from the overall effectiveness with some exceptions of course. I am not sure what the goal was, but I found the music to often be too dissonant and jarring to add anything to the performance, and it became a distraction.

Overall I did enjoy Glory. The concept of the show was incredibly appealing and came together in a way that covered a multitude of facets. Violence is an incredibly diverse and important topic to discuss, whether through art or political discussion or anything in between. Shay Kuebler succeeds in adding his voice to the fray in a clear manner and shining the light on the glorification of violence in our cultural landscape.