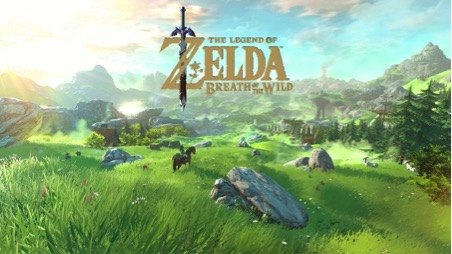 I know it’s been months since my last article: I booked two big contracts in a row that took up all my time. Somehow I found the time to take chunks out of what may be the greatest winter for video games ever. Here’s what I’ve been playing this week:

Zelda: Breath of the Wild

Issues with women aside, BotW is easily the best game to come out in years and is already making some greatest games of all time lists. Modern games seem to have a pattern of enthusiasm to them: that initial wow-factor slowly subsides into routine as you realise that the first few hours of any one game represent a microcosm of everything that game has to offer. Sometimes, this really works. Witcher 3‘s starting area, White Orchard, presents one or two examples of almost every type of player experience the rest of the game will iterate on for the next 100+ hours, but the variety in narrative and the depth of the game’s combat and bestiary keep that repetition from becoming tedious. BotW, which masterfully cribs from the trends in 3rd person action games of the last decade, does this too with the Great Plateau area. I can’t figure out how many hours I’ve put in BotW (Does the WiiU track this?) but it’s easily past 50 and I’m essentially doing the same five things over and over. It isn’t even close to getting old. The game rewards curiosity and encourages exploration in a way I’ve never seen before. If an object or piece of landscape looks out of place or special, it is worth checking out. Often, the ‘reward’ is trivial: a korok seed (used to upgrade inventory space) or an underwhelming weapon or gem. The real reward is in the view, the satisfaction of arriving upon an uncharted vista, further unexplored areas stretching out in front of you.

BotW also borrows three key elements from the Souls series and Bloodborne. First, BotW‘s enemies do massive damage when they hit you, especially at the beginning. Not only that but the game’s always-entertaining physics model means you get knocked around quite a bit, often off cliffs or down stairs, which further damages you. The enemies do, as in Souls, have recognisable patterns that you learn to exploit until eventually you can take on ten or more enemies at once, no sweat. (This is not like From Software’s work, where Lesson Number One is “Never fight more than one enemy at a time”)

Second, BotW has the same coyly vague approach to player information. Weapons have a base amount of damage they do, enemies have a base amount of health. A weapon that hits for 50 points will always take 50 points off an enemy. The simplicity is beautiful. Food items, critters, and other things you can cook with have names like ‘endura shroom’ that hint at their properties once cooked, but the actual system of cooking is never explained beyond “Toss some stuff in a pot and see what happens!” Many items end their description in “You could cook with this but it may have other uses.” Those ‘other uses’ are up to you to find out.

This last point is the best thing BotW takes from Souls: its approach to storytelling. While BotW has a similar amount of cinematic cutscenes as Bloodborne, many of them are optional flashbacks you have to seek out in the world with nothing but a still photograph to guide you to their location. Most of the stories told in BotW are done through character dialogue in the form of legends and rumours as to the contents of nearby ruins or ancient heroes. (That the player happens to be one of those heroes is met with varying amounts of belief among the world’s NPCs.) Both BotW and From Software excel in environmental storytelling. The world itself tells the story. Early on, the player comes across a field full of the rusted hulks of Guardians, mechanical war machines that were turned against their creators 100 years ago. They are (mostly) long-dead and easily blend into the background as the player hunts for horses to tame. Once mounted, the player is sent towards an ancient wall and, as he gets closer, the number of dead Guardians increases. There are dozens of them separated by giant craters and the rusted shapes of swords, shields, and banners abandoned in the earth. The wall itself is swarming with these wrecked hulks and is itself destroyed. Obviously, a huge battle happened here in the distant past but no one is still alive to remember it. The player is left to wander the battlefield or to race past it on horseback, never seeing the forest for the trees.

I’ve got a lot more to say about Zelda in future posts but I’ll try to keep my enthusiasm focused for now!

Origin Access is like Netflix for the EA catalogue and a monthly fee gets you some pretty great free, full games like Dragon Age: Inquisition and Mirror’s Edge: Catalyst, as well as some classics from Origin and Bullfrog like the Wing Commander series and Dungeon Keeper. Another perk of the subscription is access to limited trials like Battlefield 1, the WW1 installment of DICE’s Battlefield series.

I’ve played about four hours of BF1 and while it’s probably the best technical realisation of the decade-old Battlefield formula, it makes me feel… sick? Like, to my stomach. Remember that really brief period in the mid-2000s where some companies tried to make Vietnam the new WW2? It didn’t really stick, despite the quality of some titles, I think because the US wasn’t ready to think about the quagmire of Vietnam as suited for a die-by-the-second meat grinder shooter like Battlefield, nor a heroic run-and-gun power fantasy like Call of Duty. WW2 has been fetishised by a half century of heroic films and characters and even ‘realistic’ portrayals like Saving Private Ryan and Band of Brothers present its characters as just and good men in a bad situation. Vietnam doesn’t have this advantage. The films made about it are cynical, brutal, and flawed, like the war itself. Spec Ops: The Line proved there is merit in treating the often ghoulish confluence of war and video games with serious moral weight but it used a fictional conflict and an adaptation of Heart of Darkness (Itself famously adapted for the aforementioned quagmire of Vietnam) to tell its story.

Battlefield 1 attempts to represent the horror and futility of WW1 with an extremely effective opening level. I haven’t played very much of the following campaign, but the next two levels throw the care and respect of this opening level right out the window. They present the player, a former chauffeur-turned tank driver, as an unstoppable stealth commando, as deadly behind the levers of a tank as he is with a knife. Now the character, as written, is a little wiener: appropriately meek and overwhelmed by the horror of war. But as an avatar of the player? He’s a goddamned unstoppable badass who kills thirty men single handedly on his first day.

This power fantasy is anathema to the multiplayer, which does at least attempt to represent the charge-fail-charge again battles of WW1 in the new Operations mode. In Operations, the attackers have three attempts to break through the line. If you die, you’re either revived by a medic or your respawn back at your line and try again. If the whole attack fails, you get two more shots at it. The presentation of it all feels appropriately bleak and hopeless and there are moments, under heavy fire and enduring relentless shelling from the enemy, hastily tossing on your mask as chlorine gas skews your vision, that the game does the best job ever at representing WW1 in a video game.

And that’s kind of gross. Maybe it’s the Canadian in me that finds it hard to enjoy BF1, as Canada has traditionally honoured its service in France with sober respect and acknowledgement of the horror of trench warfare. As an inexperienced player of BF1, playing on the PC where shot accuracy is far higher than on console, I found myself often in no-win situations where any movement would result in death: by gunshot, by grenade, by artillery, by knife. I am a cautious player by nature, I’d rather stay alive and capture objectives than get lots of kills, and even then I found myself trapped or, worse, locked into attacks as the tide of other players pushed me forward into unsafe scenarios. I often exclaim when I play video games. Zelda often elicits a non-ironic “What is that?” or “I wonder what’s over there?” My most frequent exclamation in playing BF1 was “What do I do?” Often uttered as machine gun fire pinned me into a corner, or artillery shells rained down from above, or the grenade danger indicator flared up too close for me to run.

Sometimes, when I play games, I get frustrated when my super soldier or fantasy hero can’t accomplish a task I could easily achieve were I there in person. Grabbing a ledge or slipping through a closing door is easier in your own body than puppeteering a digital avatar by pushing buttons. In BF1, I never feel that I would do better in person. The vulnerability, the helplessness, those verbal expressions of futility, make it hard to care about my K/D ratio.

And when I need a break from all this wonder and dread, I play Brutal Doom. It’s probably the best pure action game ever made and is so much more than a gore mod for Doom. I don’t have much to say about it that hasn’t already been said by countless others, just that you should play it.