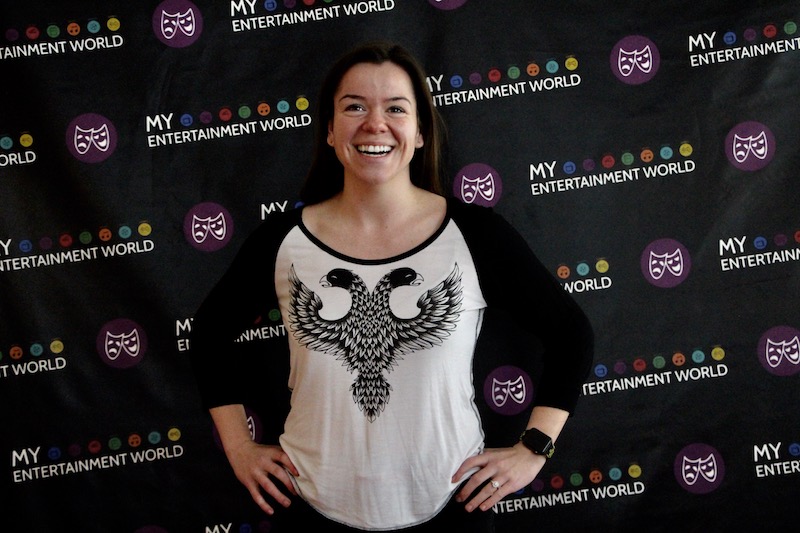 The delightful Sheri Anne Godda has won the MyTheatre Award for Outstanding Supporting Actress before (in 2013 for the RESISTIBLE rise of arturo UI) and now she’s back in the same category for her chameleonic performance as “CB’s Sister” (aka teenage Sally Brown from Peanuts) in Dog Sees God at Second City’s John Candy Box Theatre with Echo Productions. She took a break from wedding prep to catch us up on life since her last Nominee Interview Series and hint that a one-woman show might be in her future.

You won the MyTheatre Award in 2013. What have you been up to since?
I’ve been really involved in The Second City. I took my first couple improv for actors classes in the middle of 2014 and I went through their improv conservatory. I really fell in love with doing improv. So I have a couple troupes now, we do improv pretty regularly, and now I’m involved in the house company at The Second City too, which is really fun. We get to perform every Friday night at The Second City- where you saw Dog Sees God, actually, in the John Candy Box Theatre.

How did you get involved with Dog Sees God?
Echo Productions- I actually met the creator and director and producer [Victoria Fuller], we served at Jack Astor’s together. And we both realized that we love theatre, that’s our passion. The first show I ever did with them was Frankenstein, I played Igor, and that was the best time because she lets me play really fun, weird characters, which is what I like to do. And ever since that, we’ve done a few other shows together. We actually did Dog Sees God in… I guess that was 2014. We did it in Kensington for the first time, our first mount of the show, and it went really well. I played the same part, Sally. That’s how we met, and now we do fun theatre stuff together.

Was Peanuts a big part of your childhood?
You know, it’s so funny, I didn’t know a lot about it. I mean, I knew the characters, actually, from the Simpsons, because they do parodies. So I had to do a lot of research. And when I was told that they wanted me to play Sally, I looked at her and I saw the pink dress, and I was like “ugh”, and the blonde hair, and I was like, “oh, I don’t know”. But I found a lot of similarities, actually, with her. Especially when I got to play her a second time, bringing in the improv and finding new things that I was able to relate to her.

She’s sort of defined, at least in Dog Sees God, by her inability to define herself. Was there anything you latched on to as a trait that could carry through all of those personas?
For sure. When I was a teenager, I was the biggest tomboy. I found it easier to have this tomboyish persona, and sometimes I’d pretend I was a boy. I think it had a lot to do with my weight at the time. I was considered heavier, and I was bullied a lot for being heavy, so I would be wearing basketball shoes, basketball shorts, and I would take on this persona of being this boy. So that kind of really brought me in. The way that Bert V. Royal actually writes her development in the play, she’s trying out all these different things- she’s kind of gangster, then she’s really into theatre- so that really carried me through, that “I don’t know who I am,” because I too was uncomfortable in my skin when I was a teenager.

Were any of the personas particularly fun or particularly difficult to play?
You know what? I think the thing that was the hardest for me was wearing so much pink. Victoria’s throughline is the colours of the characters; mine was pink, and I’ve always rebelled against the colour pink. But in terms of her different personas, no. I felt really comfortable playing her kind of gangster persona.

The other thing that really attracted me to her was, she has issues with malapropisms. Because I’m also dyslexic, at a young age I was told “you just don’t listen, you’re not paying any attention, you’re a bad student.” But it was really just because I wasn’t getting it. So when Sally says things like “violins broke out” instead of “violence broke out”, I felt a big connection to that.

You worked with some of your close friends on this production. How did that dynamic influence your on-stage relationships?
Oh man, it was huge. Eric Rich [Beethoven] is actually in my wedding party, so is Olivia Clarke [Tricia]. And, because we went to school together, we have just an amazing connection. We know how to play off each other really well. And it was really fun watching them grow in these characters. I think for Eric, dealing with being gay in this role, he’s never been able to have an opportunity to explore something so close to him. Our last night, I was crying because of how much I’ve seen him grow and how I was so proud that he had the opportunity to just really delve into this part that is so close to home for him.

Thomas Duplessie played your brother CB. How did you develop that sibling dynamic. Do you have a brother in real life?
I don’t have a brother in real life, I’m an only child, so it was very interesting to develop that relationship. When we did it the first time, we didn’t really talk about the things that we talked about for this mounted production. We talked about death, and we talked about the relationship between family and what it’s like to lose someone that you love. And I think that really helped me find a connection with what it would be like to have a sibling. I’m really close with my friends, so I also consider them like a brother or a sister. But Thomas is just so brilliant. I really love working with him because he’s so honest, and we’re able to just really look at each other and work on what the relationship really was.

What were some of the most interesting conversations you had with director Victoria Fuller in developing your interpretation of the character?
Well, it was, for her, trying to keep me to the script, which is sometimes hard for me. And not using props, because I love props. So she’s helped me out with some of my crutches, I’d say.

What were the props you tried to use?
Oh boy. So, our first mounted production, I had a voodoo doll. I think it was right before opening, I came to her and was like, “I need this voodoo doll.” I’d found it in Kensington somewhere and was like, “Please! I need it.” So, before the lights go up for one of the scenes after I find out that my brother is actually in a relationship with the guy that I love, I’m like poking my brother with a pin. Then I realized, for this show, it just wasn’t needed. Victoria really helped me with that, especially when we first started working together. I’d ask her for certain props, and she’d go, “Do you need it? My style is very un-proppy.” So that’s really helped me come a long way, I think.

Is there another beloved children’s property you’d like to see get the Dog Sees God treatment with the characters grown up?
Maybe Winnie the Pooh. Is that odd?

They’re very scary animals if they’re fully grown- a tiger and a bear…
Yeah, you’re right. And Eeyore would be really depressing. Maybe just seeing those characters as 30% animal and, you know, the rest human. I loved Winnie the Pooh, reading the books when I was really young. The character of Eeyore is just so interesting to have in a children’s story. I went through phases of liking each of them. Like, I liked Tigger for about a week, and then I was like, “I’ve had enough of you, Tigger.”

What are you up to next?
Well, I’m doing The Second City on Friday nights. And really, right now it’s just wedding prep. To be completely honest, that’s what I’m up to. I’m going to be focusing on potentially writing a one-woman show and seeing if I can I [produce] that maybe a year to two years down the road, after the wedding. It’s going to be very character-driven, and definitely will have a lot to do with what I’ve dealt with in my childhood, stuff like that. I think it’ll be a challenge for me to do. I’ve never written a full one-woman show before.