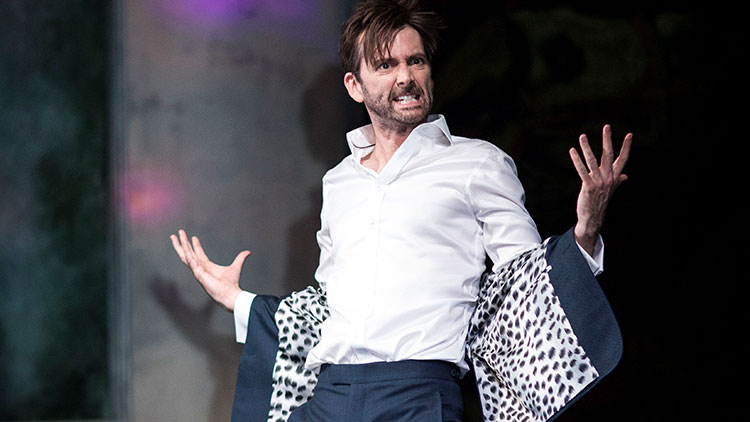 The name Don Juan may be a culturally synonymous with a seductive womanizer,* but Don Juan in Soho, while replete with lewd acts and general promiscuity, is more than merely an adoration or condemnation of one man’s sexuality – it is a nuanced look at the concept of morality, the social mores that define human interaction and the exploration of what it means to be human. Patrick Marber’s Don Juan in Soho premiered at the Donmar Warehouse in 2006 and is enjoying a short-run revival (with a few updated references) with David Tennant at the helm as the debaucherous Don Juan, and, given both the subject matter and the source material (Molière’s 1665 play Dom Juan or The Feast with the Statue), this is a play destined to divide audiences. Although Marber’s work occasionally feels a bit dated, certain dialogue feels stilted and unnatural, and portions of the set feel distractedly simplistic, Don Juan in Soho is an intellectual slow-burn that raises more questions than it answers. The themes Marber explores have a way of looming in your mind well after the show has ended – that is, if you can endure the show’s many failings both in writing and in production.

Don Juan in Soho centers around Don Juan – a man with apparently very little moral compass who seeks an animalistic gratification of the senses rather than any sort of real human connection. He is shallow, narcissistic, emotionally stunted (or is it emotionally dead?) and cares nothing for the emotional and physical damage that he causes. When first introduced, Don Juan has fled his newlywed wife in search of sex because, as it turns out, he just married his wife so that she would sleep with him. As Don Juan explains to his faithful manservant, Stan, who assists him in his sexual conquests but wrestles with the moral implications of such actions, he delights in the chase. Unperturbed by threats made on his life by his wife’s family, Don Juan continues his lecherous ways. Forewarned by a spectre made of stone that his time on earth is limited, Don Juan is given an opportunity to repent his wicked ways or face the consequences in death.

Although much of Marber’s play is spent following Don Juan between sexual conquests, there are intellectual respites that save Don Juan in Soho from itself. Don Juan’s sociopathy and narcissism make the character a generally repulsive one, although, at times it is unclear if Marber’s Don Juan is truly unfeeling towards others or truly believes that his lifestyle is the only life worth living in todays’ society. Confronted with his mortality, he delivers a monologue calling out the absurdity of people chastising his behavior when society is teeming with moral turpitude, from priests preying on children to a sitting orangutan of a U.S. president who talks about grabbing pussy. A society where carefully curated social media facades have replaced any semblance of living life and where it is rare to find a person who is unwilling to sell their beliefs for a quick buck. Rather than valuing any sort of socially-accepted morality, Don Juan values  adherence to ones own moral code (especially in the face of adversity). The greatest failing in Marber’s play, either intentioned or not, is Don Juan’s hypocrisy on this very point. He lies and disguises himself to win over women, thereby leading a life built on facades.

The larger looming questions in Don Juan in Soho are whether Don Juan truly believes that his life is one worth living and whether he believes that there is any life worth living in todays world. The only time that Don Juan shows any care for another person is when, in a drug-fueled stupor, he attempts to save a man from a brutal attack. It is a rare moment of apparent selflessness that is so out of character that it begs the question – was he trying to save the man or deliberately putting himself in harms way? When given the opportunity to repent or face death, he resolutely declares that he will not apologize for the harm he has caused others – an action he knows will result in his murder. Given that he previously made such a concession to his father simply to ensure his inheritance (i.e., the cash fueling his expensive activities), his refusal appears to be less a personal adherence to some moral code than a decision to end his life.

Both Marber’s work and his production (Marber directs as well) have their flaws. Don Juan in Soho spends a great deal of time establishing Don Juan’s odiousness as a human being without providing much substantive context. None of his wife, father, mother or any other character (aside from his attendant Stan) are given enough material or stage time to either make you care about their characters or to get a full sense of the harm they have suffered at the hands of Don Juan. Substantive moments of dialogue or emotion are so fleeting that I found myself lamenting their appearance at all in the oft-superficial piece. Marber’s staging only compounded these issues with rave-like dance interludes and a soaring angel of death sequence – flashy moments devoid of additive meaning.

Compounding the production’s problems, the Don Juan cast fails to find their footing with the material. Adrian Scarborough plays a lovable and occasionally sympathetic Stan with enjoyable fervor and seems the best suited casting choice of the ensemble. Gawn Grainger appeared to struggle with his lines during the preview performance that I attended (only a few days before opening), and his portrayal of Don Juan’s father felt half-developed. For most of the ensemble, the dialogue provided them little opportunity to craft intriguing characters, although Danielle Vitalis did shine in one brief emotional scene when Elvira, Don Juan’s wife, confronts Don Juan. The reason that I was initially drawn to the show (as most Don Juan audience members are, I suspect) was the opportunity to see David Tennant perform on stage. Unfortunately, I missed Tennant’s much-lauded performance in Richard II at BAM in Brooklyn last year and was ecstatic to have another chance to see him perform. Tennant’s engrossing work as the villainous Kilgrave in Jessica Jones and the overworked do-gooder Detective Alec Hardy in Broadchurch demonstrate his undeniable talent as an actor.** Unfortunately, Tennant is a difficult sell as a playboy. While he delivers Don Juan’s moralistic monologues with enviable command and poise and he has a charming playfulness about him, he lacks the swagger or bad-boy demeanor to truly sell Don Juan’s animalistic way of life.

Don Juan in Soho is a complex show to assess as it straddles the line between philosophical debate and superficial dribble. For those who can forgive the many failings in both the writing and production, the few substantive themes of the show may prove worthy of a night out. However, Don Juan in Soho is likely to be a divisive show with many a theatergoer dissatisfied with the product in total.

**First, if you have not seen Jessica Jones yet, stop reading this and get thee to Netflix. Second,   yes, Broadchurch. Not the sad U.S. rip off, Gracepoint. Seriously, U.S. – stop re-making and ruining British television shows for American audiences.