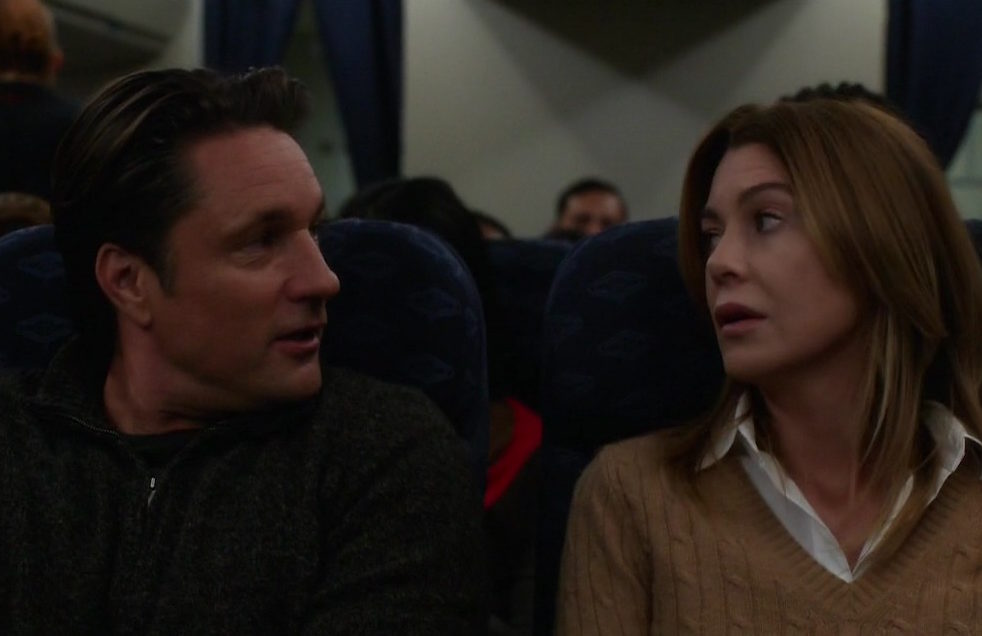 Checking in at Grey Sloan

Can you ever really love something after feeling betrayed by it? That’s the big question I have for my obviously privileged life: I feel betrayed by a television show. It’s been two seasons since the beloved Dr. Derek Shepherd died in an ironic fashion – a head injury only he could heal. Which, if I’m not mistaken, is exactly how Dr. Drake Ramory died. (Is my ability to reference Friends in every article I write as impressive to you as it is me?)

Usually, I can forget about the loss of Derek if I think of Grey’s as two separate shows: DE – Derek Era, and PDE – Post Derek Era. I enjoy both shows, but my heart will always be with one more than the other. The times I can’t forget about the show being a shadow of its former self is when I’m forced to reconcile that it is in fact the same show, and my favourite character has been killed off in a ridiculous fashion. “In the Air Tonight” forced off the blinders to remind me of the show that once was, and reunite it with the show that it is now. And try as I might, I still can’t forgive it.

Dr. Nathan Riggs is no McDreamy. He’s not as good looking, he’s not as charming, and his relationship with Mer is nowhere near the passion she or the audience deserve. I get it, Meredith is a widow and it’s been way more years her time than it has ours so she has every right to move on without us getting angry. The issue itself is not with Meredith finding another mate, its that MerDer was a relationship for the ages – sure it started with an affair, but we we’re given reason to forgive Derek for cheating, because he was also cheated on. You can only manipulate the narrative so much before the audience settles on their feelings for a character. Derek was the perfect guy for an imperfect girl so we forgave him for his indiscretions because the love that Meredith and Derek had for each other was the kind of love we all seek. Passionate, imperfect, but forgiving. I have that same love with the show, I will defend it and it’s imprecations to casual viewers and I have forgiven the number of times one doctor can find herself in life or death situations and come away rosey, but I will not forget that the story being told now refutes the story already told. Meredith said it best herself this episode, “I’m married.” Damn right she’s married. She had the best husband and the best little family and the girl has been through enough. To me, her story ended there. This is “darkest timeline” Meredith, a gloomier story then the one we dream of.

In this story line, Meredith is remembering the plane crash that killed her sister (her second sister, the first is never mentioned and the third is Maggie – still kicking), destroyed Derek’s hand, took Arizona’s leg, and lead to injuries that would kill McSteamy days later. How Riggs never heard this story before the plane ride is beyond me.

“Hey the hospital is named after you? Cool.”

“Oh, no it’s named after my sister actually, who died in a plane crash that we were all in.”

The conversation was that nonchalant on the plane, why couldn’t it have happened that casually at home? Even more ridiculous is that Meredith and Riggs are on the same plane together and don’t even notice until she volunteers to swap seats with a father so he can be reunited with his family. How big is that airport? Did they not show up the recommended two hours before a domestic flight? You’re surgeons, go get your eyes checked you blind fools.

Continuing with the coincidences is the multiple medical emergencies happening on board. I’ve been on plenty of planes with plenty of turbulence and no one has even so much as chucked up their reheated chicken before. (Viscously knocks on wood). Wherever Meredith goes, though, tragedy follows. “Sometimes I feel like I’m cursed. A lot of people die around me.” Golden rule: always ask the people near you if they have recently been hexed before flying through the air. It has saved me countless emergency landings. Of course, a passenger named Max makes a near fatal mistake when he needs to go to the bathroom after Meredith and Riggs join the mile high club. Poor Max, you can’t be the person Meredith likes the most on the plane, that’s how you end up with her sticking a syringe in your head during turbulence. Which just ends up being another reminder that Derek is gone, Meredith performs brain surgery for the first time since studying under him. This time, instead of her assisting, she is being assisted by Riggs, and some other strangers because rules don’t exist “in the field.”

Finally, a happy ending occurs as the pilot (female, cool. Also a bit bitchy, less cool), lands the plane safely and Max presumably gets to the hospital in time. Riggs tells Meredith its time to move on and let go, and she’s trying to do that by inviting Riggs back to a hotel with her. Classic Mer, skipping right to the good stuff. As much as I am happy the story of a widow moving on a finding love again is happening, I find it difficult to appreciate because of the story we we’re told before. I’m not as invested in Riggs and I was Derek, and I doubt I even will be. There’s too much history with Derek, and too much hesitation of Meredith’s part to move on. Throw in the fact that Maggie will soon feel betrayed by her sister when she inevitably finds out about their relationship, and the possibility of Hunt’s sister (Rigg’s ex) showing up (no body and all that) and you just have more drama than you have love. As much as I try to forget, this is one storyline I will never forgive.