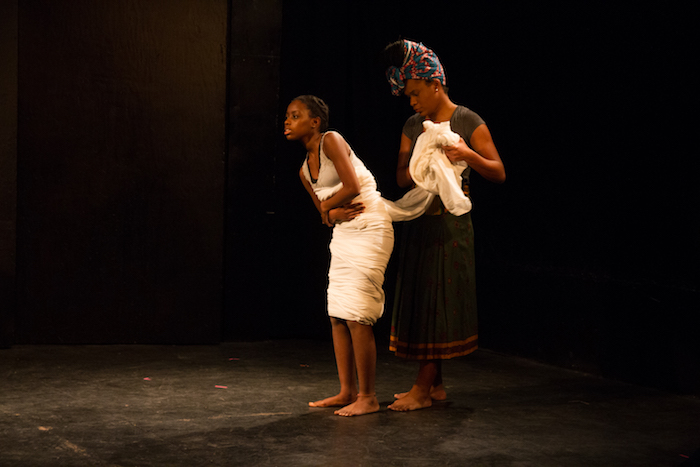 The Refugee Plays – Politics on the Stage

As I waited in traffic on the highway leading to JFK airport, I skimmed the review requests filling my Inbox. Despite having a frenzied month at work and preparing to move overseas, as soon as I got word that the President had signed an executive order banning refugees and immigrants from traveling into the country and that a cadre of lawyers were setting up a temporary command center in Terminal 4 of the airport, I grabbed my computer and hailed a cab to join them. As I read through the listings, my eye caught a request for a show entitled “The Refugee Plays”, which seemed too fortuitous, given current affairs, to decline. The Refugee Plays is a series of short plays that explore the experiences of refugees and undocumented immigrants in the United States, shining a carefully placed spotlight on certain legal, social and economic difficulties faced by this population and humanizing an oft-misunderstood group. Unfortunately, a heavy-handed effort by some of the writers beleaguers the play and several of the one-acts veer into lecture territory, featuring characters that talk like caricatures based on social media personas – extreme and one-dimensional.

Broken into five one-acts, each written by a different playwright, The Refugee Plays excels when it highlights the barriers that make connection between Westerners and immigrants difficult and the aspects of humanity that unite us all. Although Penny Jackson’s A Different Place features trite dialogue and stifled characterization at times, her story of a refugee unable to speak English and lost in a foreign land resonates in its simplicity. A target for cruelty because of his “otherness”, refugee “M” connects with an American who recognizes that M is seeking food and shelter – basic human needs – an action that poses no danger to the American. Jackson beautifully exposes both M and his American friend’s struggle to find a common understanding by allowing M to break the fourth wall and address the audience in English – revealing the complexity of communication between the characters. Callie Kimball’s play Hyena, the best-written show of the group, similarly allows the audience into the thoughts of her subject – a timid young woman named Asja who finds herself in an aid camp with American volunteers. Asja appears haunted by her mother’s words, pulled between the truths she learned about foreigners when she was a young girl living at home and the foreign situation that she must now navigate on her own. Asja strikes a balance in her turmoil, finding her voice and embracing her identity. In both Jackson and Kimball’s shows, the works benefit from the emotional portrayals of M and Asja by actors Niall Ray and Vongai Shava, respectively. Both actors were engrossing in their ability to portray both fragility and strength on stage.

Among the less successful shows are Sean E. Cunningham’s We One Want What’s Best For You, which appears to be a satirical attempt to highlight the problems and absurdities faced by undocumented workers in domestic positions, but the playwright’s message grows muddled in farce and, ultimately, the confused piece feels overworked. Charles Gershman’s Morning After falls prey to the opposite issue – the piece is overly-simplistic and, although it attempts to expose both the superficiality that pervades American life and the desperation of the refugee position, the treatment of both is so one-dimensional that Gershman fails to shed much light on either subject. Carlos Castro’s opening piece Mickey’s Confession, proves more successful than both Gershman and Cunningham’s plays in that it examines a single woman’s journey to America and the trials she faces, many of which are common social and legal problems that men and women in her position face. The narrative both educates the audience and allows them to empathize with Mickey. Unfortunately, the piece runs a bit too long and Monica Quintero’s performance, although seemingly authentic, was riddled by dropped and mangled lines which made the narrative difficult to follow.

Tying the five stories together are set transition sequences that permit the actors of each show to interact with one another as they engage in visual imagery representing the immigrant experience. Although some of these sequences are easily identifiable (e.g., a group of men and women in line who are being stopped and observed by a guard before being allowed to proceed), others are ambiguous. This creative choice is an intriguing one, smoothly altering the scenery while simultaneously contributing to the narrative of the production. Moreover, at the start and end of the production, musicians who regularly play on the New York City subway for tips perform while actors with poster board “translate” the message of their music. Although reading the posters distracts significantly from the music, the performance reminds the audience that the fictional characters in the play have very real counterparts who live and work (and perform) in our communities – men and women who are so engrained into our daily lives that their presence often goes unnoticed. They are not outsiders. They are our neighbors.

The Refugee Plays is both timely and compelling, telling the stories of a group of people who are often hidden from view, ignored and ostracized. However, the quality of plays varies widely between playwrights and, while some reach the audience on an intellectual and emotional level, others fail to deliver compelling material despite the rich subject matter at the core of each of the plays, resulting in a disappointing collaborative effort on the whole.