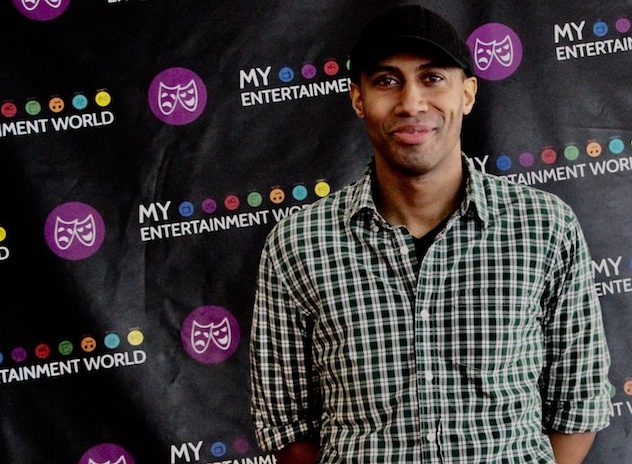 Jordin Hall scored an Outstanding Supporting Actor nomination this year for his performance as enigmatic soliloquizer and deeply human villain Aaron in Seven Siblings Theatre Company’s bold apocalyptic take on Shakespeare’s brutal Titus Andronicus. He’ll face off in the supporting actor race against his director Will King who’s nominated for his performance in another Seven Siblings show.

Do you remember your first experience with theatre?
I believe it was 3rd grade, or 4th grade. I was in this school play called Once upon a Lily Pad. I played an alligator or a frog but it was a lot of fun and I was pretty into it.

I’m assuming that if you were an alligator, you were the villain. If you’re the frog, you’re the hero, right?
See, I was the hero, but there were snakes accosting… a frog? I don’t remember, it was so long ago. But yeah, I was the good guy. And then we sang a song about listening to your parents, I remember that part.

Nowadays you seem to keep coming back to Shakespeare. What is it about those plays that you’re drawn to?
I love Shakespeare. The language is so beautiful but it’s such a challenge. First of all, finding out what everything means, and then finding out how to present it in a way that audiences can understand. It’s gnarly. It’s unlike any other challenge I’ve ever faced before. I just love it and I feel like I grow so much doing it. I’m really into it.

How did you get involved with Seven Siblings?
I was in a Shakespeare play with one of the people who runs Seven Siblings. Her name’s Erika Downie. We did a show called The Winter’s Tale in the summer and she told me to come audition for [Titus Andronicus]. I’ve always wanted to do Titus, because I think Aaron’s such a cool guy. I jumped at the chance to audition, and the rest is history.

Tell us about working with Will King as the director and how he helped shape your interpretation of the character.
Will King is awesome. If there’s one thing I appreciate in life, it’s bravery and I find Will King super, super brave. He took a crazy concept with Titus and he did something that very few people would attempt. You know, it’s a risk. I’m sure the Shakespeare purists weren’t overly happy about it, but he was so brave, and I appreciate him so much for that. It’s one of those things that makes you grow so much as an artist, when you see somebody just caring about the art so much that they throw caution to the wind, and just give it all up.

Speaking of the bold concept, what’s it like working with puppets?
Oh, man. That was difficult to figure out. I thought the puppets were so cool, and beautiful, beautifully made. But it’s hard to have a legit interaction with the face of a puppet. Especially a puppet that’s being controlled by three people, or two people. It was interesting, but it was cool.

You had to look into the puppets’ eyes, not the eyes of the actual person speaking.
Yeah. We couldn’t look at [the actors] so, especially in rehearsals, that was troubling. Because I kept looking at the people and I’d catch myself- “what are you doing? Look at the puppet. The puppet is the face.”

Aaron, more than anyone else in the play, has a lot of the soliloquies, talking directly to the audience. How did the energy of the audience on any given day affect your performance?
Every audience is different, energy-wise, but what I really appreciate is the fact that Aaron’s set up to be the villain of the play, but the fact that he has so many soliloquies means he can connect with the audience. And I personally don’t think Aaron’s the main villain. I think it’s a world full of villains, and I think it was very easy to get the audience on my side. Especially when some of the racial comments came in. You could kind of feel the energy in the room shift, which is nice, you know, having them on my team for a bit. For a bit [laughs].

Did you feel like the racial politics of the play were affected at all by the jump forward in time, or is that part of the commentary, the fact that things are the same as when Shakespeare wrote it in the 1600’s?
I think that might have been the main point- the stupidity of races- it has the power to be cyclical if we let it.

How did you find the right balance between the charming sympathy of the character and the really dastardly deeds that he not only does but then brags about?
I really enjoy finding the heart of a character so, on the surface he’s doing all these horrible things, but they’re influenced by the shitty life he’s probably had to live. He’s a servant right now to the Queen. He’s probably led his life as a slave. I’m sure he’s witnessed horrible atrocities, and even in the room of this play, you see them saying horribly, horribly racist stuff to him, and about him. So, based on that, he wants to get revenge. “You think I’m a black dog? Okay. I’ll show you I’m a black dog”. But once this child is born, suddenly it’s not about Aaron having fun. It’s about another life hanging in the balance that he has to protect and make sure lives on past him. I think that’s what’s so incredible about Aaron. How real of a person he is, even though he’s kind of written to be a caricature of evil, a little bit.

At the beginning of the play, Aaron is introduced to the Andronici and their world but he comes in with an already firmly established complicated relationship with Tamora, Chiron and Demetrius. Tell us about working with those actors to develop that sense of history and complicated dynamic.
Working with those actors was fantastic. They’re all friends of mine. I know for me and Reece [Presley], who played Demetrius, we talked about how these two are probably best friends. Because they’re kinda closer in age than Chiron is – Chiron’s a little green, he’s a little idiot, he’s a little wild, but he’s great.

Kathleen [Werneburg], who played Tamora – me and her, we did The Winter’s Tale together, and that’s where we connected. I guess we just set it up like [Aaron and Tamora] were lovers and that was where the interesting thing was. It was hard to differentiate if Aaron was with Tamora because he actually cared about her or he’s just trying to climb higher. That was something I really had to look for and find in rehearsals. Like, at the end of the play when Aaron walks in, he sees Tamora dead. I found that that really affected me as a character. I think maybe he doesn’t have the capacity to love her, or love these people, but I think he’s damn fond of them, you know? More so than anybody he’s probably met in his life besides the people from his youth, like his family.

Why would you say he wouldn’t have the capacity to love her?
I just think he has been numbed to the world, to the atrocities that he’s seen, to the blatant racism that he’s gone through. And so I think that, again, the baby is such an interesting moment because finally he’s showing he’s able to care for something other than himself. I think that he hasn’t felt that way in quite some time, because I think growing up in this kind of crazy world is dog eat dog.

Why does the baby have such a profound effect on him?
I definitely think that he sees himself in the baby. Me and Will were talking about this, and trying to develop a backstory. I said “when he sees the kid, he sees all the things that maybe he used to be.” And hope. I feel like Aaron might have been quite a positive person before a bunch of bad stuff happened to him. And I think he sees the kid as his second chance to make sure that this kid becomes what he couldn’t.

Did you have a favourite moment in the production?
I liked the baby scene. When he first discovers it. I think that was the moment that changed everything for him. It’s brilliant writing, and it was interesting to try to play.

What were you hoping audiences would take away from the production?
I was hoping that they just have a great time, you know? It’s hard to say “I hope you gain something; here’s a play where we’re throwing blood everywhere”. I just wanted them to have fun, and come on the ride with us.

So you saw it more as a black comedy or a thriller than as a drama?
I saw it as a drama with hilarious moments because of how ridiculously violent it was.

Do you have any dream roles you’d want to tackle one day?
Yeah! Hamlet is my dream role. And also Walter Younger from the play Raisin in the Sun. I really want to play those two roles before I’m done.

What is it about Hamlet that draws you to that character?
His inner struggle is just crazy. And I think that character is just so, so, so difficult to play. I would really relish the challenge in trying to unpack him piece by piece.

Is there anything you’d like to add?
Just thank you for your time, thank you for the nominations. And love, peace and soul train.