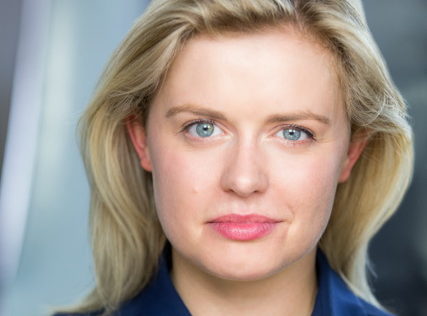 Best Actress nominee Anne-Marie Piazza brought light and love and lots of cleverness to the star role of Beatrice in Iris Theatre’s lively outdoor Much Ado About Nothing in London’s Covent Garden. She then turned around and brought brilliant comedy to the secondary role of Verges the idiot policeman in the same show. We caught up with her on tour with a new production to look back on her summer of switching roles and swapping insults in the name of love.

Do you remember your first experience with theatre?
I can’t remember the first thing I saw but I was lucky to have an amazing drama teacher at primary school so was in shows from very young. The first thing I ever did was an alternative to the nativity story in nursery and I was a rabbit. My mum was ill so the show was being filmed so there’s evidence of this: I spotted my dad in the audience and stood centre stage and waved at him. A habit that I have obviously continued into my professional career.

How did you get involved with Iris Theatre?
Iris were one of my first theatre jobs out of drama school, we did Alcestis in 2008. Then I went off and did other work and rejoined them for their summer season of 2014 to do Richard III and Alice Through the Looking Glass. The space is unlike any other to play and the audience are very special.

Do you approach playing Shakespeare differently than you would a contemporary piece?
I do and I’m beginning to think I shouldn’t. With Shakespeare, I work rigorously on the text, analysing, pulling apart how certain words are used and why. It’s methodical and forensic. And something I should also be doing for modern texts I think. Whenever I find I’m losing the character, when we’re halfway through a run and a scene isn’t working anymore, I go back to the text to [examine] how and what they are saying. It always keeps me on track.

What is your favourite Shakespeare play and why?
Richard II and Richard III and I would love to play both/either of those complex, flawed, enticing characters. I loved Fiona Shaw’s interpretation of the former and am only sorry I missed Kathryn Hunter’s performance of the latter. The poetry of Richard II is utterly stunning and some of my favourite text in the English language. And who can’t love to hate and hate to love Richard III, devil, jester, charmer, tragically flawed.

How did the outdoor, travelling nature of the production affect the performance?
It was very helpful actually. It kept the text buoyant and playful, scenes had their dedicated space and we could move through the audience keeping them part of the storytelling and live to everything going on around them.

You had incredible chemistry with your Benedick Nick Howard-Brown. Tell us about working with him on that complicated dynamic.
We had worked on a few Iris shows so it helped a great deal that we knew each other. But I suppose Amy [Draper, the director] created the environment where the chemistry was able to flourish: there were tasks and improv games that allowed us to question the nature of the B&B  relationship, enabling us to play around with the dynamic. Because the approach was so playful it meant that our characters could be too which is why it was so interesting to watch.  It was mischievous and the real joy was finding the game in every scene and playing it out differently each night.

In most productions with double casting, the leading actors still only play the one role but you doubled as Verges. Was that tricky to execute juggling such a large part with another smaller one?
Not tricky at all, it was an absolute joy! Emma McDonald was my double act both as Beatrice and Hero, and Verges and Dogberry. Amy led more fun clowning games to pull apart the characters and this allowed us to explore what we as actresses could bring of ourselves. V&D are difficult characters as the comedy and wordplay is tricky (I’m not sure it’s aged all that well) and in watching lots of different productions I realised that you need to add a lot of character on top of the text to make it funny for today’s audience.

Amber Scarlett is also nominated for her work on Much Ado. Tell us a little bit about the set design for the show and how it helped to set the tone of that world.
Amber is really wonderful, very creative and sensitive to a productions needs and the limitations of the space. Given that there are two shows in a season at Iris some of her structures had to serve the following production and whereas some people would be thrown by it, she made it into a blessing. She handled everything with grace and class and created a beautiful world to work in.

What were you hoping the audience would take away from the show?
That Shakespeare is fun and naughty and playful and he creates scenes that turn from comedy and tragedy on a sixpence. And that theatre has a duty to challenge and be irreverent, to be different from what has gone before and change it’s audience in some way… but if all that sounds a bit pretentious I hope they had a great time, got lost in our world for a bit (the audience who were in Brexit results day, I’m looking at you) and want to see more theatre as a result.

Do you have a favourite moment in the production?
I loved the argument after the wedding scene and the very famous line “I would eat his heart in the market place”. I suppose one of the reasons I loved it was because it balanced all the humour of previous scenes (like the Prince’s proposal). It is the moment where we really see the heart of Beatrice, a woman who goes through life and most interactions with a quick retort and witty come back. During the wedding scene and subsequent shaming of Hero she is utterly silent, in shock and then, when she finally finds her tongue, she is ready to breathe fire.  It’s glorious.

What are you up to now/next?
I’m actually on tour with a show called Thisbe that follows life after The Dream and fully integrates BSL. Then I’m performing as the lead in a showcase of the new musical The Wicker Husband whose writers Rhys Jennings and Darren Clark won the Stiles and Drewe mentorship award. And then after that I will be in a (long awaited) revival of the sell out show These Trees Are Made of Blood directed again by the wonderful Amy Draper. We will be at the Arcola Theatre June 14th to July 15th, please come and see us!

Do you have anything you’d like to add?
That, although Beatrice was a dream role and a character I could pour so much of myself into, that was only possible with the sensitive and intelligent direction of Amy Draper and the playfulness of the rest of the cast to bounce of off. Shows like this one really are an ensemble performance.