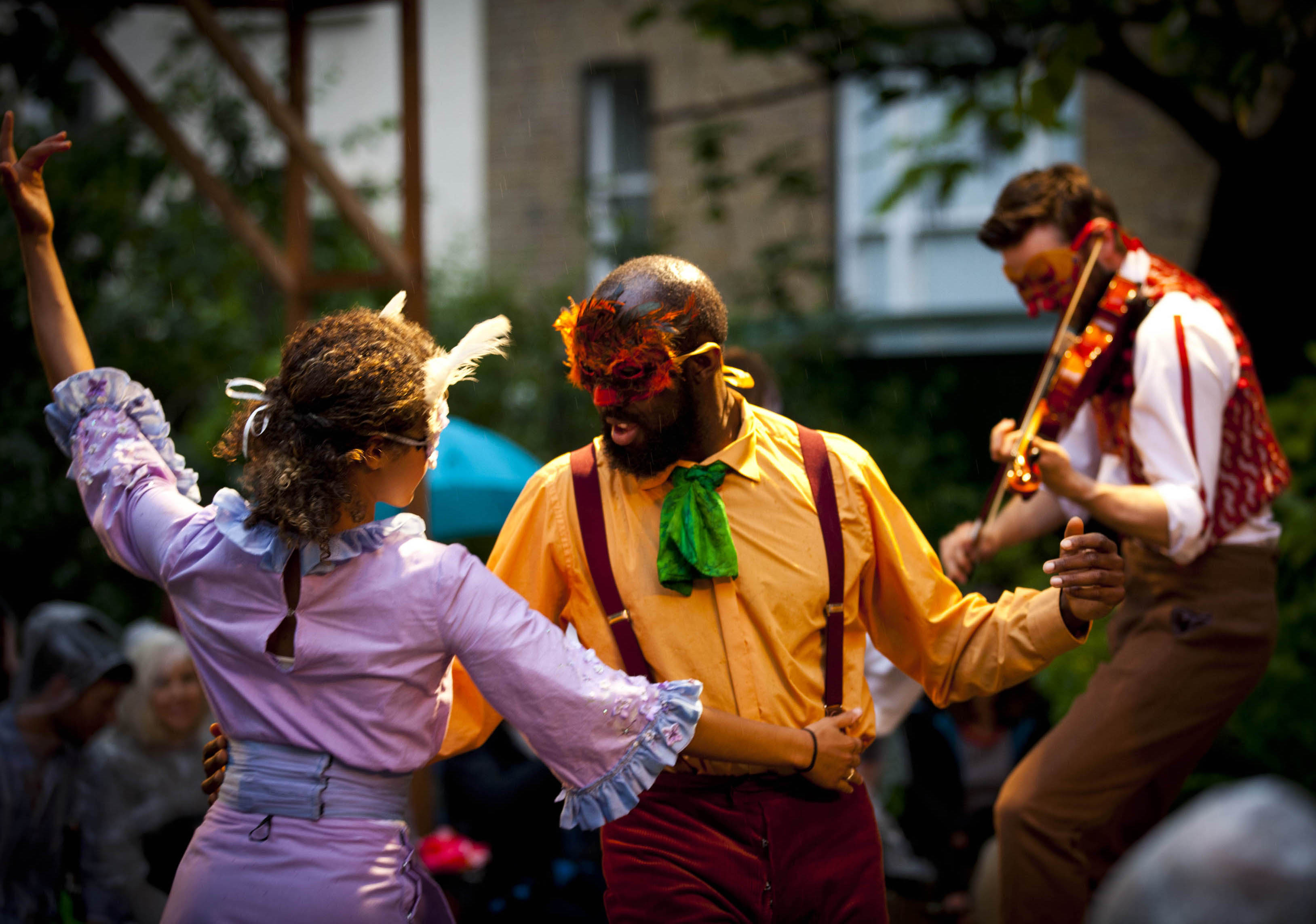 Iris Theatre’s Much Ado About Nothing

Outdoor performances in London can be a gamble. If it rains, all the audience cares about is that they were in a dry, covered space. Luckily, Iris’ Theatre production of Much Ado About Nothing is so entertaining that, even with a little rain, the show must go on and the audience is not too annoyed by the weather. The play takes place on the grounds of St Paul’s Church in Covent Garden. The result of this is an enchanting evening. With the chandelier in the trees and the party in the park, it truly feels magical, even with the raindrops. The costumes are exactly what one would expect from a Shakespearean play, which is good for those who like tradition but bad for those expecting more creativity. Spectators are asked to move with the actors as the play progresses, physically taking them from Leonato’s house, across Messina and eventually into the church for Claudio and Hero’s wedding. Amy Draper’s decision to direct the play in this way is unconventional and tricky, but it is executed remarkably well. No one feels annoyed at having to change seats because everyone wants to see what awaits them in the next scene.

It is Shakespeare’s funniest comedy, and the actors do not fail to make the audience chuckle throughout the performance. Shakespearean fans are acquainted with the plot; therefore, more attention tends to be paid on the quality of the portrayals. As goes the theatrical cliché, there are no small roles, only small actors. This is especially true because actors with leading roles take on smaller ones in this production. Anne-Marie Piazza goes from giving a fabulous portrayal of Beatrice to making everyone laugh as Verges, the silly and somewhat stupid policeman. Nick Howard-Brown delights us all as Benedick and he disgusts us as the evil Borachio, one with an English accent and the other with a very strong Scottish accent. The switches are clear and very entertaining. Benedick and Beatrice’s chemistry, going from hatred to infatuation, steals the show. That being said, the whole cast deserves a mention for their performances. Each play different instruments and all of them seem to know how to either sing or dance. They’re all quite well rounded performers and they know how to show it off elegantly.

The challenges carrying out a play outside are not too big to handle. The actors’ voices are projected loudly. The scene transitions are clear and they make everyone laugh. During the transitions, the audience is engaged to make it less long and dull for everyone to take their seats. Iris Theatre’s production of Much Ado About Nothing is proof that Shakespeare is not boring and that a play can successfully take place anywhere if it has the right cast and a director is willing to think outside the box.