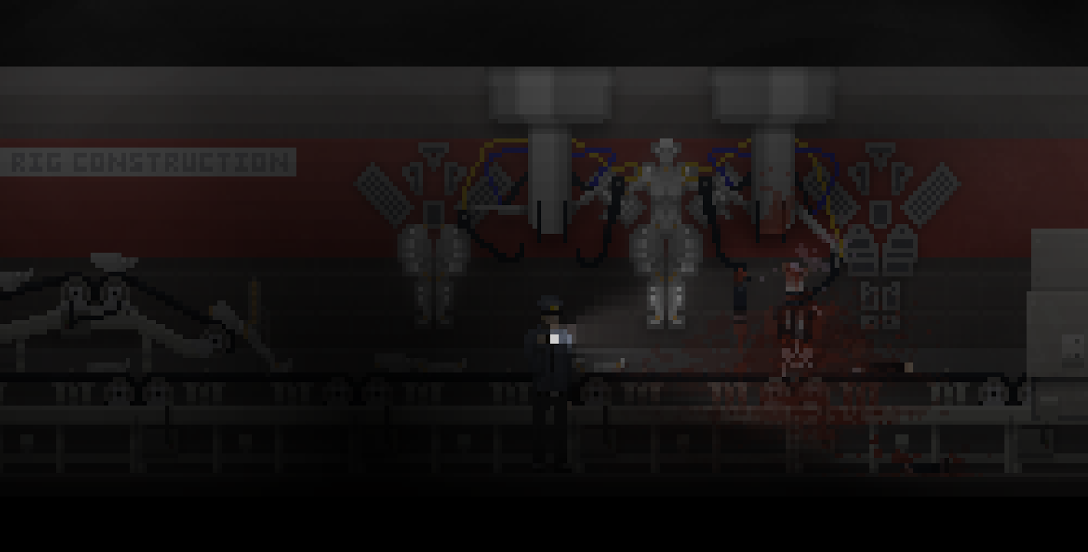 The game immediately warns you that every action will have consequences and that multiple play throughs are recommended in order to fully experience the game, so I was already on edge. When my hapless security guard character Tom awoke from night terrors and arrived at a lonely factory to work the night shift, I was twitchy. The game has a slow-burn intro similar to most horror movies, where a combination of eerie music and hints of impending doom signal that bad things are coming for you. And so, after meeting my irritable fellow security guard Buck, taking a patrol of the facility, and reading some ominous emails, I became pretty sure I didn’t want to be here anymore. I took the keys I’d found (to Buck’s car, as it turned out) and opened it. I wonder if I could go back to the train? I thought. I fired up the car and did just that. Then I boarded the train and left. The credits rolled, I unlocked an achievement, and I burst into a grin. Very few games let you ‘break’ them like this and I always have a special place in my heart for games that do and allow it to make narrative sense. My first play through took only fifteen minutes, but was it surprisingly satisfying.

I wish I could say the same about my subsequent experience which, though generally positive, also featured a number of frustrations that unfortunately muddy an otherwise very intriguing atmospheric horror game. Nevertheless, there is a good deal to enjoy in this short, punchy indie horror game – just make sure that’s your jam first.

Uncanny Valley is an indie horror game built by a small team, in a similar vein to Another World or Monkey Island; it’s a point and click game featuring retro design but also featuring real-time enemies (like Another World). In it, you explore an abandoned tech factory during your evening shifts, eventually having to return to your apartment or just passing out and experiencing strange, horrific dreams. Over the course of the story, you’ll slowly piece together what happened at the factory through emails on abandoned laptops, puzzles, and audio cassettes. What gradually emerges is a story of office politics, the quest for artificial intelligence, and the dangers therein, as well as Tom’s history with the mob and why he has sought out such isolated employment.

The most interesting hitch, is that you likely won’t learn all of this on your first, second, or even third play through. Anyone familiar with Telltale’s games (such as The Walking Dead, Game of Thrones, or more recently Batman) will be accustomed to the idea of cause and effect in their narrative leading to a desire to replay and see what the other paths look like (though this admittedly more limited in Uncanny Valley due to its smaller scope – understandable, given the size of the team). Since each play through is relatively short (my longest being about an hour and a bit), taking alternative paths has a distinctly The Legend of Zelda: Majora’s Mask feel, both in the imposed time limit before Tom falls asleep and in having to replay the opening sequence over and over on each play through before being free to explore. This was one of the frustrations I encountered early on, as the opening is long-ish considering no new information is provided, leading to five or so minutes of padding that you cannot skip.

Nevertheless, replaying your life over-and-over from the beginning creates a different sort of mystery, as more unfolds with each life. This was particularly true for me, given my short first run, but I suspect it will be true of other players as well.

Despite how hooked I was by the atmosphere and premise, I quickly encountered a number of factors that soured the experience: first and foremost, for a game that deals heavily in text, the retro font is hard to read, with several letters looking too similar (capital Ws and Hs, specifically). This may seem like a minor quibble, but when your game disseminates 90% of its information through text, it proves increasingly frustrating. The second deals in the vagueness of environmental interaction; my first three play throughs all followed similar tracks, largely because I hit a block in my second that I hit again in my third: I knew what I hadn’t accessed, knew there were items and pieces of the puzzles in those areas, but couldn’t for the life of me figure out how to access them. The answer, as it turned out, was to use a fire extinguisher to break down locked doors. While this is fine in theory, there is no suggestion that this is what the fire extinguisher should be used for and the item itself doesn’t evoke that functionality at all (it’s not like finding a fire axe). The game had already established that keys were a thing, so finding that an object with an obvious function (putting out fires) was actually meant for breaking down doors was incredibly frustrating. Even more so given that the game often offers suggestions for almost every other puzzle. After three runs, I finally looked it up and had a, ‘goddammit, are you serious?’ reaction to the result; I never mind being outsmarted by games, but in a game where the functionality of the few available items and few interactive environmental pieces are usually highlighted, having an additional layer of interaction present was incredibly frustrating. Even more so given this was the literal key to unlocking half the game. If you fail, as I did, the story magically jumps you past that bit – which was also frustrating, as my character suddenly had access to places I’d never reached. While I thoroughly enjoyed the endings I got, I felt gently cheated by a mechanic, rather than outsmarted by a puzzle (though there is a cute newspaper article that suggests that doors can be broken down by fire extinguishers later on, which I suppose is your clue?).

In any event, both endings I got before solving the riddle of the fire extinguisher were fun, different, and in one case delightfully creepy (one of the best uses of the line “I love you” I’ve ever seen). The writing is interesting and I would love to see more from this studio (though the night terrors plot never fully materialized in any of my play throughs and thus felt like creepiness for creepiness-sake, and the mobsters always felt a bit tacked on). The score is also excellent and managed to evoke genuine unease and fear, which is a big feat for a small-ish game.

Uncanny Valley is definitely worth a look if you’re into atmospheric horror and point-and-click games (though PS4 controllers continue to be a rough way to play these), but understand what you’re getting: this is an indie game, it’s short, has some glitches and errors, and is somewhat limited in its scope. However, it was also developed by less than ten people. Take the game for what it is and you’ll have a good time (again, if this is the kind of game you’re into), but don’t expect or compare it to a AAA experience (as all-too-often happens to indie games). The price point ($17) may seem high compared to what else is available for the same price, but also keep in mind there was no major studio backing this and thus that $17 goes a long way to help the developers. Consider it the difference between buying groceries at a farmer’s market rather than a bulk store: here, you’re paying for innovation, care and investing in the future of a new developer and yeah, that’ll run you a bit more…but it will also lead to more ambitious, risk-taking narrative games from studios like this one.