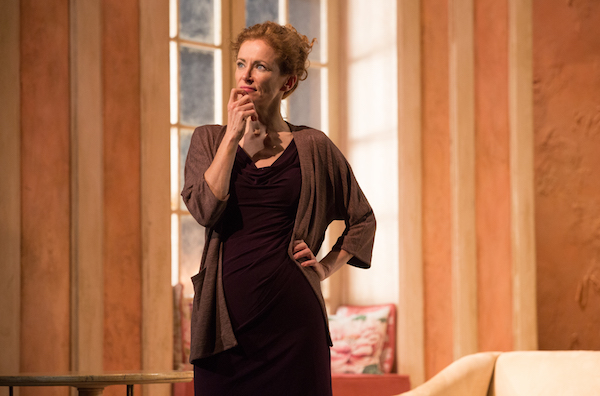 Nino Haratischwili’s play is about a couple, Liv and Emil, their angst over the loss of their son, and that aftermath of that grief. Liv (Leslie Hope) is a pianist, someone once renowned for her interpretations and performances of Rachmaninov but who has fallen into a semi-retirement as the result of her son Henri’s death and her subsequent divorce. Her ex-husband, Emil (Geraint Wyn Davies) tries to drag her out of her self-pitying black raincloud, to no avail. The only person who is able to get her out of the funk is Simone (Caroline Gillis), a young prodigy who also happened to know her late son.

As the result of Simone’s seductive pleading, Liv eventually starts to teach her piano. Realizing Simone’s talent, and rediscovering her love of music, Liv plans a concert for them both. In the lead up to the performance Liv and Simone discuss Henri, and bond over their attachment to him. Simone seduces almost every single person in the play, and her promiscuity makes Emil deeply jealous and, ultimately, suspicious. He decides that she cannot be for real, and so investigates her past, uncovering a number of lies that she’s told along the way.

The play itself (a new translation of a German text) seems like an odd choice for a Canadian theatre company. It’s about a bunch of elite musicians who are caught in the web of their respective neuroses, to have that shaken up by an enigmatic stranger. If you really want stories about that, Chekhov is better at it. And funnier. It’s about grief, sort of, and working through that grief, but in a melodramatic, almost operatic way, which is not just strange to see in a play, but also not the right form in which to explore those feelings. Grief is a complicated, nuanced thing, and melodrama ultimately cheapens it.

The production itself is gorgeous, with set and costumes designed by Debra Hanson that fill the stage and evoke the grandeur of Liz’s past. The backstage and lighting are clearly visible on the sides, one of the many Brechtian elements of the show design that reminds us that we’re watching a play. Though, to be honest, I wouldn’t have forgotten. The acting is slightly disappointing, especially given the experience and talent of the actors on the stage. The actors have presence but most of the lines seem to be played for emotion, rather than intention, and half the time it isn’t clear what the characters are trying to accomplish with their words so large swathes of the story get lost. The only exception to this is Caroline Gillis, who consistently comes across as clear in her acting, despite the enigma of her character.

So imagine my surprise when, *spoiler alert*  in a bizarre deus-ex-machina twist at the end of the play, Simone winds up being a weaponized Eliza Doolittle of sorts, a mere pawn in the revenge of Liv’s deceased son. As Liv reads the letter from her son, collapsing in grief, I felt almost nothing. Well, nothing besides deep annoyance that is. The play gives us almost no connection to Henri besides through the eyes of his parents, and it was not clear to me why I was meant to care about his malicious and childish revenge on his absent mother. In fact, I was generally unhappy that the entire plot involves men either dictating women what they should be doing, what they should not be doing, or the ways in which they failed as mothers, as lovers, as people, without at least developing and motivating that resentment. We see enough male entitlement and resentment in our culture every single day, we don’t need to see it go unchallenged on the stage, too.