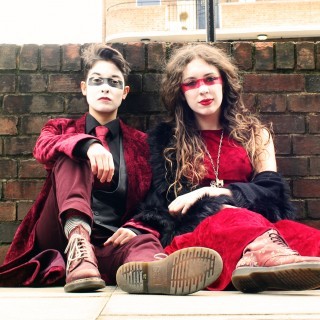 You see the above hashtag for a second of Sh!t Theatre’s hour-long show. It’s in footage of Manor House, the duo’s local area, on a billboard apparently for an E-cig company called Vivid; I thought it was from Nike (of ‘Just Do It’ fame), because both sentiments suggest a vaguely life-affirming yet thoughtless life philosophy, the subtext of them: Ignore Inhibitions And Make Progress. I was wrong. I didn’t even know cigarette companies could legally have such casual slogans. I digress.

Sh!t Theatre, a company since 2010, and judging from their website, I think just comprising Louise Mothersole and Rebecca Biscuit, are of a Fringe-y kind, i.e. they take pressing social issues and dismantle them through a flurry of different forms in a one-hour engagement. Remember how RashDash discussed the patriarchal structures of 21st-century British theatre and beyond through music, dance and ‘serious acting’? Here, Sh!t Theatre take on London’s housing crisis through song, surrealism and comedy.

But then I have to explain the housing crisis for those outside of Britain. Essentially, the government doesn’t want to lose out on globalisation, because there are foreign investors out there looking to put money into the country. One such form of investment is luxury private sector housing, which results in these admittedly pretty blocks of Scandinavian-looking grey all around the city. And they aren’t just in ‘prime central’ areas, either. The corporations looking for a bargain will build their flats in poor areas; this causes a slight absurdity where you have these housing developments advertising areas that the foreign millionaires buying the flats would never want to live in, and Sh!t Theatre play with this idea a lot (I’m getting to their role in this, I promise). What happens, however, is that despite these big blocks of grey popping up in low-rent areas, the fact that there are now a bunch of millionaires living in that space, and the fact that there will probably be more blocks of grey there in future, means that whoever controls the rents, whether for shops or private housing, will inevitably put them up. Those who can’t afford those new rents have to go further out of London’s centre; anyone looking to first-time buy now has to wait a lot longer. This inevitably continues until all of London is Scandinavian-looking grey*. #neverlookback

It’s not all clear and all bad, though. Brexit might slow down foreign investment; also, those foreign millionaires sitting in their luscious high rises ineluctably develop the country in their own ways (unless it’s a holiday home for them). There’s also the sheer fact that the private sector is necessary for property development of any kind in London and until we have a non-austerity government (as in a good and normal one), we can’t be granting that much to private companies to force them to produce affordable homes.

That’s a TON of pre-information for a small show, but you can bet anyone in London watching Letters to Windsor House will have a grasp on it as almost all of us (the Soho Theatre gets younger audiences) rent here. In 2013, Mothersole and Biscuit started renting an ex-council flat that was a bit shit. The flat (that they no longer live in) is situated in Windsor House, a former council estate—that was incidentally filmed for Schindler’s List to signify a Polish ghetto. But it’s definitively not the Queen’s residence, despite the way each block of the building is named after various royally-owned properties (this is then used to make quick comparisons between austerity Britain and ‘liberal’ Victorian policy). It’s got thin walls, thin floors, and as the two stay there they find homeless people setting up tents on the grass outside.

But Sh!t Theatre aren’t really complaining about their own situation. As it happens, despite the flat not being the best, it’s cheap and mostly works for them; it’s the unsupported homeless, small business owners and maybe themselves in the future that they’re concerned about. Foreign investment, despite its many boons, is levelling and remoulding their local area into something alien (in many ways it’s ‘these goddamn foreigners driving us locals out’, except the foreigners in question don’t necessarily care about working hard). It’s a bit messed up, really: poor migrants can come here and work themselves to the bone whereas an oligarch can buy a fourth home with no sweat involved and yet the latter, by investing even a fraction of his money into the British economy, may have more of a positive impact than 100 of the former put together. It’s bizarre. It’s anti-human. Maybe it’s why we need more socialism, I don’t know.

The reason I proffer these arguments to you is that Letters to Windsor House has been described as agitprop theatre. And that’s a dangerous word. Honestly, I think it’s a byword for an imbalanced moral argument, i.e. a pejorative, rather than a good thing. And I don’t necessarily think the show is one-sided. If something is truly being didactic, then by implication it’s saying the opposite stance is so obviously wrong that we don’t need to present it with any force; in essence, this means that what you’re saying is so obvious you don’t need to make a play about it. Yes, that’s right: YOU DON’T NEED TO MAKE A PLAY ABOUT IT.

Letters to Windsor House does, though too subtly, present the contesting view (although there may indeed be another view to the problem, given that the arguments probably rely on a difference between more than one premise). The other view: that development is a necessary process, and because of the state of the country, and the fact of globalisation, it has to come from outside of Britain; in addition, gentrification has accompanied development since forever—poor on the fringes, wealthy in the centre (with asymmetry, because, you know, it’s London).

HOWEVER, the other side, the one that Sh!t Theatre takes, is that the above argument is wholly utilitarian and utterly ignores the rights, which are a formal recognition of the inherent value of, people. All of this is implied, but clear as the show’s plot begins:

Mothersole and Biscuit portray themselves, mostly (in that ambiguous verbatim theatre way that gives the form so much of its strength). They show recordings, tell us about their history re the flat, sing, dance, and read out letters, often in British pillar box costumes. The wacky side of their form lands, the more serious side—and not so much the moral complexity as in some of the more personal letters they read out—doesn’t so much. And the pair are funny, especially the pranks they’ve recorded, which sound lame at first (pranks are bad on principle), but have a situational irony to them that makes them fantastic.

The best prank (by the by, it’s all pre-recorded and real) is the one where they’re taken around one of the luxury high-rise apartments in their area by an estate agent while they pose as people who’ve completely bought into the tower block’s advertising campaign. It’s the most exemplary part of the show because it’s funny and yet tempered by the haunting prophecy of the agent: he points to various buildings and plots out the window, claiming that that’s going to be a luxury block of flats, and so is that, and that, and that. #pleaselookback

Jesus, I haven’t even gotten to the main action of the show: basically, letters keep getting sent to the duo addressed to former tenants. Sh!t Theatre then make it their job to do some detective work and find out who these people are and hopefully give them their mail/help them out. It’s a dramatisation of their principle that individual lives have value, and they prove that in their lively celebrations of each former tenant (or at least based on the information they have).

Their point in doing is that each tenant has the chance to be the subject of the play, and they’re genuinely giving each one a chance (like good Kantians). Their main formal method of celebration is through working with the screen behind them, but the most memorable is through music. Like good Fringey people, they are multi-instrumentalists with looper pedals, and their predilection for simple melodies leads to some wonderful earworms (if you’ve seen the show, you know I’m thinking of ‘Rob Jecock is an adult baby,’ which uses the opening melody line to ‘Under the Sea’).

While I don’t feel it’s right to comment on the humour of it, as subjective as it is, there is a problem with one of the bits they do as it marrs their argument a tad. In order to highlight the ridiculous beautifying of the advertising campaigns for the new grey towers, the duo juxtapose footage and audio from the ads with their own footage showing how shit the area is. Or maybe the joke isn’t that the local area is shit, but at least the irony comes from the difference in expectation between the advert to the reality of Manor House; the bigger the difference, the funnier the joke is, so if the area is portrayed as shit, then the joke is much better. But then if it is being portrayed as shit (though admittedly it might just be being portrayed as unglamorous), then their argument for the defence of the area is less strong. If it is a shitty area, then it’s hard to see that the lack of gentrification has protected something special and unique. The argument is that there’s a joy in the lack of glamour, but it comes across as though they’d rather live somewhere else if they had the money. I’m not sure about this, though—this whole point is pretty speculative, so I’m open to disagreement on it.

I’ve written too much. I’ll stop. But the fact that it’s given me too much to talk about is a good sign. Go see it.

*If I’ve described the housing crisis wrong, tell me. I know I didn’t get into the other common causes of gentrification, but I didn’t want to ramble.