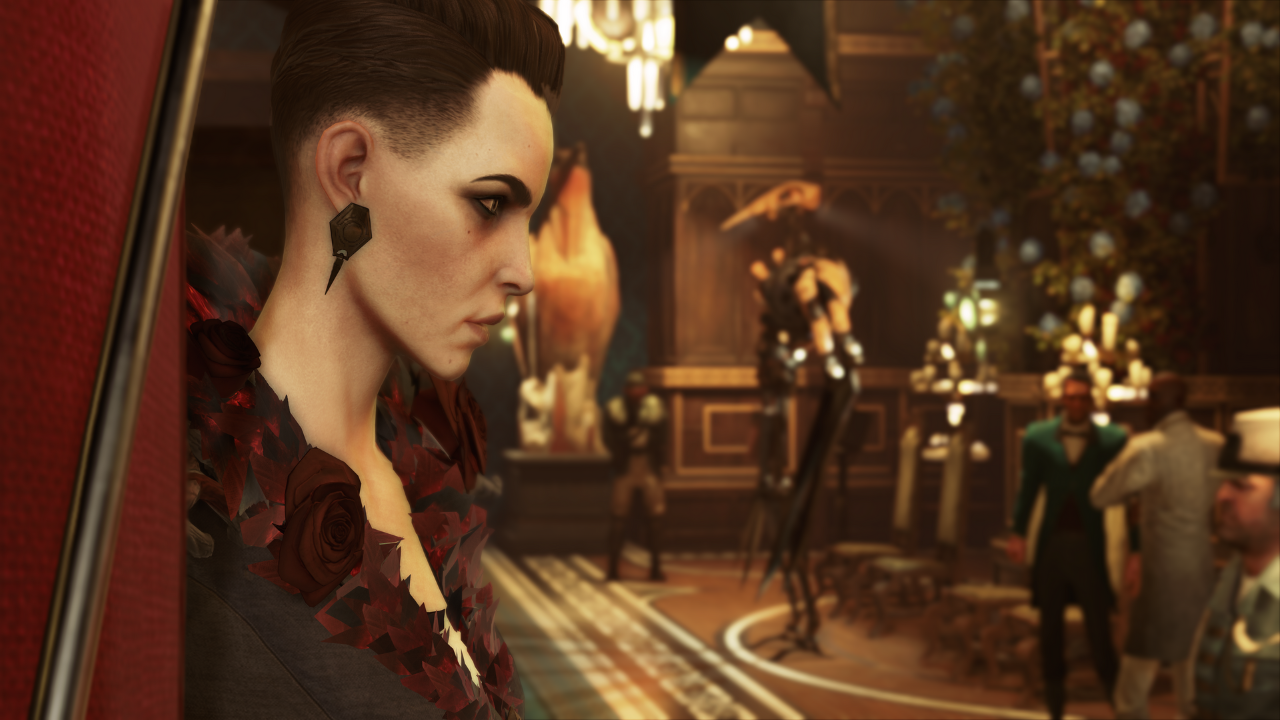 Dishonored 2: Shall we gather for whiskey and cigars?

Having completed my first run-through of Dishonored 2 (the sequel to the excellent 2012 original from Arkane Studios), I feel some sort of pride in my ‘sneak around and don’t kill anyone unless absolutely necessary’ approach. Sure, I probably didn’t have as much fun as I could have had if I had taken the ‘high chaos’ route (the game’s term for running around and murdering everyone in sight), but the genius of Dishonored 2 is its almost sandbox-like approach to gameplay, which allows you to tackle the game however you want to. You could even complete the game without killing anyone, including the main targets of each mission, if you have the temperament and patience that is. The open and varied nature of missions is the game’s main strength, with fantastic aesthetics and art design, and a strong set of gameplay mechanics. The ending might be a little abrupt and the performance troubles on PC numerous at launch, but Dishonored 2 is every bit as enjoyable as its predecessor and a fitting dose of difference in this season mostly filled with first person shooters.

Set 15 years after the original, the sequel kicks off as Empress Emily Kaldwin is mourning her mother on the anniversary of her assassination in the first game. Flanked by the Royal Protector, Corvo Attano (the protagonist of the original and father to Emily), she muses about the growing suspicion of her in the capital, and her potential connection with ‘the Crown Killer’, a serial killer who has been murdering her enemies. During the remembrance ceremony, her thoughts are abruptly cut short by the arrival of the Duke of Serkonos and her apparent estranged aunt, Delilah Kaldwin, who seeks to usurp the throne. In the midst of a coup d’état, the player is then offered to play the role of either Emily or Corvo, who are each subsequently granted their own supernatural powers by the mysterious ‘Outsider’. Corvo’s powers are much the same as in the original while Emily is granted a few similar ones (such as ‘Far Reach’, which replaces ‘Blink’ as the main warping power) and a number of new powers, my favourite being ‘Domino’, which links enemies together, meaning if you knock out one, the others fall in ilk….like dominos (see what they did there?).

What follows is a series of missions in which either Emily or Corvo (Emily, in my play-through) seeks to find out more about Delilah, taking out her allies and working towards ultimately taking her out. Each mission is uniquely different and has a different, almost watercolour like art design. They are wider and better populated than the original, with different paths to follow, side-quests to help you reach your target and numerous ‘Black Markets’, at which you can improve your gear. Dishonored 2 also sees the return of ‘bone charms’ and ‘runes’, which you can use to bolster your powers and improve your magical abilities. You can even craft your own bone charms, creating one with multiple traits and saving on your inventory slots – although, to be honest, most of the power-ups are pretty marginal.

The gameplay is varied and well put together, even if you take the ‘non-lethal’ approach, as I did. Playing stealthily, you warp from rooftop to rooftop, choking out guards and shooting sleep darts at foes. Playing a little less sneakily, you can warp from one guard to another, brutally slashing at throats and impaling your enemies with impunity. Magical abilities can also have lethal or non-lethal uses. For example, ‘Shadow Walk’ is an Emily-specific power which allows her to become a Lost-esque shadow monster, which can either put enemies to sleep or viscerally tear them apart.

It is a slight shame that it took me some time to achieve the necessary stability of FPS that allowed for these otherwise excellent animations to be smooth. Indeed, the performance issues which plagued the PC edition were numerous in the first few weeks, only later being patched with additional settings that allowed me to reach the holy 60fps point. It seems to be a growing trend for PC versions not to be optimised at launch (looking at you, Arkham Knight, Mafia 3 and No Man’s Sky). Let us hope this trend does not become the norm.

If I had to have one further gripe, it would be that the story of Dishonored 2 is decent enough, but ends a little too abruptly. Not wishing to spoil anything, the result of taking on a high or low chaos approach doesn’t seem to alter the end-result by much, so don’t let your conscience guide your play style if you’d rather go in all guns blazing.

Despite these niggles, Dishonored 2 is a worthy successor to the original and a welcome return to the steampunk world of ‘the Empire of the Isles’. With similar yet improved gameplay from its predecessor, great art direction and superb level design, Dishonored 2 is a triple-a title that is well worth your interest this holiday season.