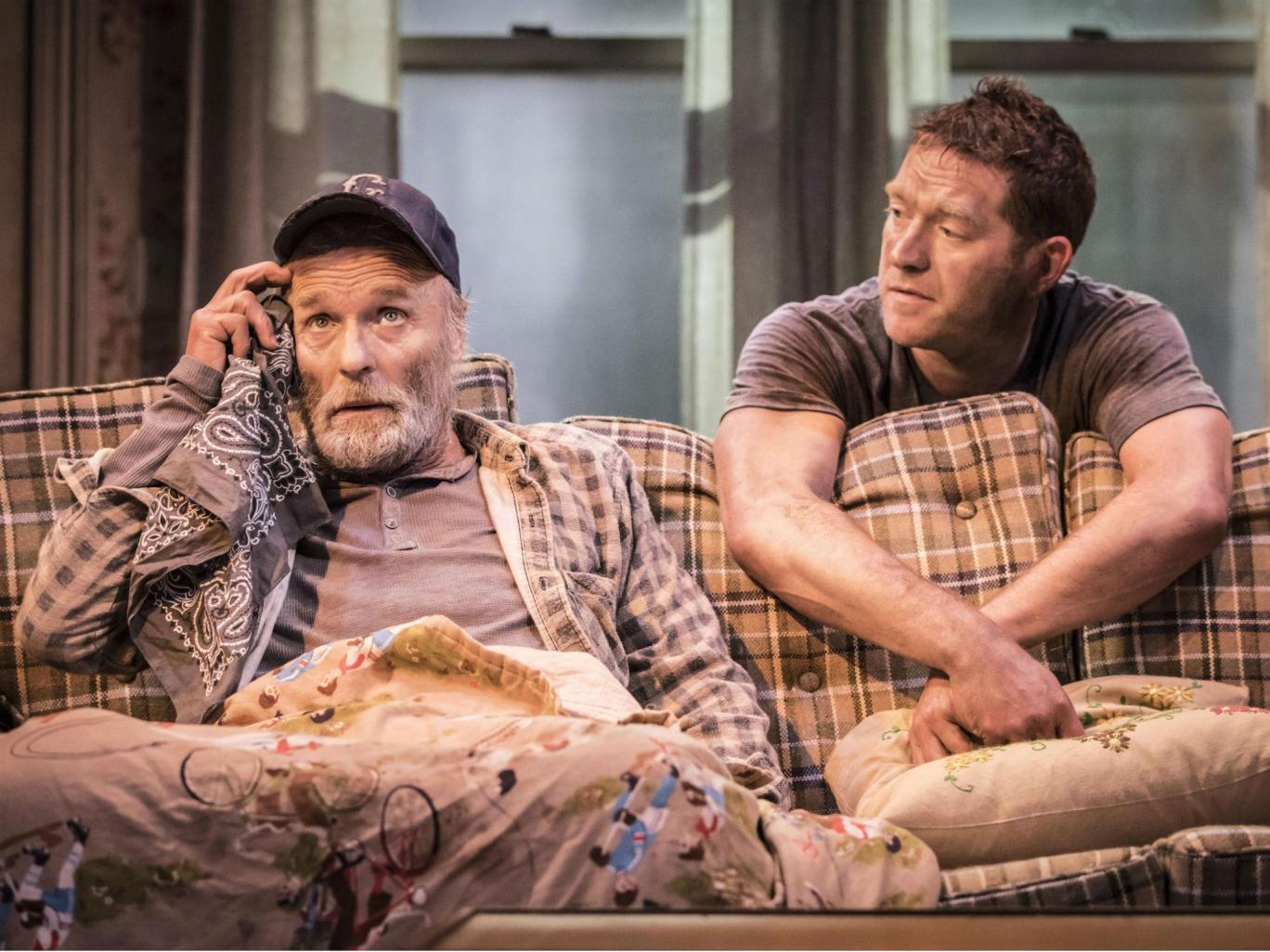 Rural Illinois in 1979. A flagging old man wastes away on a couch watching sports on his tiny TV and sneaking swigs of whiskey when alone. This is Dodge (Ed Harris), the moribund, impotent pillar of the play. His wife Halie (Amy Madigan) calls out from above. She can’t get over her all-American son Ansel’s death and, even more so, her need to impress the local parish. She leaves; many enter and leave in kind, like Dodge and Halie’s other, not so all-American sons Tilden (Barnaby Kay) and Bradley (Gary Shelford), as well as their grandson Vince (Jeremy Irvine) with his girlfriend Shelly (Charlotte Hope) in a surprise stopover.

Winning a Pulitzer prize in 1979, you’d expect the play to say something unsaid by anything preceding it; certainly, the work was something formed from its time. You’ll see (because it’s all the programme has to say intellectually) that its year of inception followed stagflation, deindustrialisation and so on, and although Buried Child strictly concerns the death of agriculture, anyone with two seconds to spare could see the connection between the Rust Belt of then and the voter base who pushed Trump’s presidency now. That means it’s relevant, right? Not quite. Relevance for an older work happens when its relations and moral arguments are transfigured in a revival; the problem is that this play doesn’t offer relations or moral arguments that are new or capable of being formed anew. The only thing it can legitimately claim to offer is mood, which is fine—not fine for 3 hours—though if unique then fine, but then Elliot botches that uniqueness. I should clarify the absence of moral arguments bit: Buried Child is proud of being an anti-American Dream work of fiction, which I find strange, as art that serves to undercut the concept has existed since, well, probably the Civil War era. There isn’t nuance to the message either, instead promoting the dullest materialist idea of how the family came to be through economic downturns (which is not to say this isn’t crucial, but more that we know this to be a cause; please tell us something new). Yet the real egregious offence of the play is its use of symbolism, though therein may be its salvation.

The symbolism of the play is flagrant to the extent you’d like to let out a groan every time the characters disagree over whether there are crops growing in the backyard. The worst offender is the priest who appears in Act 3, entirely there to be incompetent and declare something to the effect of ‘I don’t know what I’m doing here.’ Awful. But the conspicuousness of these symbols maybe point to an overall more radical tone for the play, particularly one which doesn’t give a damn about naturalism and in lieu is going for (I’m conflating mood with tone here) a far more surrealist or far more Brechtian vibe. Scott Elliot’s production doesn’t do either however, and when the inlaid surreal moments come, they come awkwardly, at worst archly, and contribute nothing to the mood. It goes back to what I said in the Burning Doors review: if you want to present a new emotional or intellectual reality to something known (in this case recession), you have to show it in form; we know the arguments, we know the causes: show us something that we can’t get from economics and sociology. The recourse to naturalism is also doubly disappointing as you know there’s so much more to be extracted from Harris’ performance beyond mere gruffness (he gets a standing O because he’s Hollywood, not for brilliance). Everyone does their part, which means naturalistically—well, not all: Irvine’s Vince is overblown with a fumbled accent—but doing well isn’t enough for this. It’s almost 3 hours of weak barbs and turgid metaphor; it’s rooted in the portentousness of its influences.

A piece like this has to be raised beyond realism even if it tries to portray highly real emotion. Where a straight performance coheres with a playwright’s original vision, there’s a perverse disrespect shown in the way the play isn’t bathed in modern light (this incidentally goes to heart of the Emma Rice debate at the Globe, even if that snafu was greatly exaggerated). I doubt I’ll watch Buried Child again, but if I do, it’ll exist in a form so much more bombastic, or so much more spartan, than the form in which it’s currently, chokingly contained.