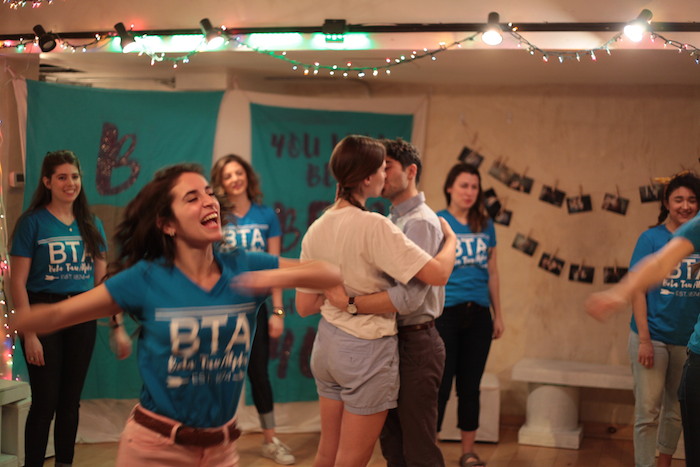 A Requiem For Annie

As I checked in at the ticketing table, the young ladies hovering around in bright blue Beta Tau Alpha t-shirts and perfectly cuffed jeans transported me back to college. It is there I stayed for the duration of Beth Hyland’s new play For Annie, unable to escape the sense that the ideal audience For Annie, with its palpable PSA undertones, is not in a Murray Hill loft but, rather, on a college campus. True, the themes of domestic violence, grief and survivors guilt in For Annie are likely to resonate with an audience of any age, but Hyland’s work is uniquely crafted to speak to college students. Given that one in three college women may be a victim of sexual dating violence, Hyland’s play seems more necessary now than ever.

A play within a play, For Annie opens with the girls of the Beta Tau Alpha sorority introducing their show, presumably being performed for fellow students, in honor of their sister, Annie Lambert, who, for reasons not yet disclosed, is spoken of in the past tense. An intelligent and sporty girl, Annie had everything going for her until a chance run-in at a grocery store with frat-boy Nick during her freshman year led to a dark and difficult college career. The play chronicles Annie’s abusive relationship with Nick and her efforts to escape his control. The BTAs tell Annie’s story, interjecting moments of tearful regret and heartfelt asides about how they missed the signs of abuse, and they explain the violent cycle that dictated her life and, ultimately, led to her demise.

Hyland’s play proves incredibly accessible for anyone who has been to college, and the message absolutely merits discussion; however, the plot feels a bit juvenile for an adult who has long since left the collegiate world. Annie and her friends swoon over Orlando Bloom, jam to the pop hits of the early 2000s, dance awkwardly in dive bars and build relationships through text message. The set reflects the transitional college life with pictures strung on clotheslines and sheets lining the walls. This is less an indictment of the play than an observation that its ideal audience resides on the numerous college campuses around this nation. Domestic violence is a difficult subject matter to tackle in an honest and illuminating way, and For Annie succeeds in its effort to tug on the audiences heart strings, prompting them to look out for signs of abuse in others.

However, certain elements in The Hearth’s production of For Annie, such as the use of an abuse cycle chart in the show, makes it feel like an educational after-school special. It is not until late in the show when a deceased Annie walks in agony among her living peers in an Our Town-esq moment does the piece elevate beyond its simple story-telling. Another failure of the play is Beth Hyland and Director Emma Miller’s use of extended musical sequences throughout the show. In some instances, these sequences are drawn out with little substantive value. At other times, the use of these musical numbers distracts from the message being conveyed. For example, during a dance scene Nick and Annie’s dialogue suggests that Nick is having rough sex with Annie, hurting her despite her protests, but the dance sequence seems to make light of this horrific situation by hiding it in a dance metaphor. These choices make the show more palatable perhaps, but simultaneously shield the audience from some of the more brutal realties of domestic violence.

The ensemble blends nicely together, embodying their collegiate roles with astute realism. Stand out performances include those from Andrea Negrete in her role as Annie’s temperamental younger sibling Casey, playing the brooding teen with appreciable snark, Ari Shapiro as Annie’s lovable and goofy boyfriend Max who provides much-needed levity in a dark show and Elizabeth Colwell in her brief, but touching, performance as the deceased Annie, reminding the audience that Annie’s story has no happy ending even if the living find closure. With respect to technical design, Both set designer Emmie Finckel’s set design and Dara Affholter’s costume design are practical and appropriate, suggesting the casual and budgeted nature of college life. While Amy Elliott attempts to elevate her lighting design in the loft space at Lucid Body House, the design appears too busy at times, distracting from the action on stage rather than complimenting it. To be fair, it is quite difficult to create nuance in such a space during a limited run of an off off-Broadway production.

Ultimately, The Hearth’s production of For Annie shines a spotlight on the still too-frequent occurrence of domestic violence on college campuses with the familiar and heart-wrenching tale of a young woman who was poised to succeed in life, only to have her time cut short at the brutal hands of a significant other. It highlights the warning signs of abuse and educates patrons about the cycles that drive abusive relationships, which is vital information that all men and women should understand but, unfortunately, often makes the show feel more like an educational piece better produced on a college campus.