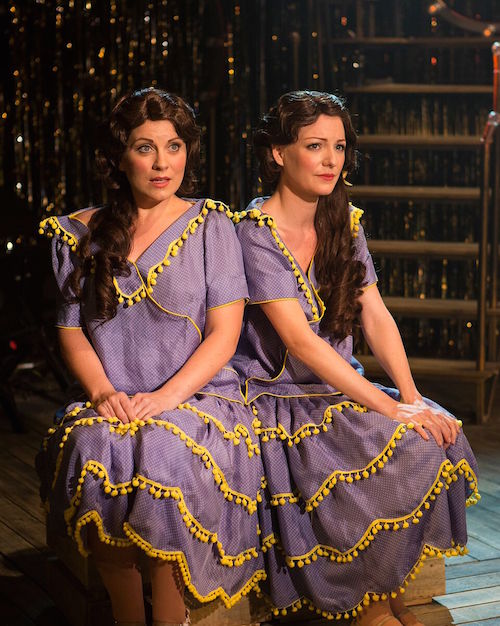 Side Show at Southwark Playhouse

A uniquely bizarre story, Side Show follows the life of conjoined twins Daisy and Violet Hilton as they are saved from their tortured life performing as ‘freaks’ in a Texan sideshow and propelled into stardom as the hottest act on the opium circuit. The musical, which first premiered on Broadway in 1997, has a rather muddled plot and often seems to lack a clear narrative direction. It boasts a rather forceful opening, featuring many weird and wonderful characters, but the plot fails to consistently maintain this intensity throughout and rather becomes a collection of intriguing and well-developed ideas linked with sub-standard dialogue.

As a spectacle, the show looks slick and smart, encapsulating early 20th century circus or carnival. Consisting largely of dimmed light bulbs, golden foil curtains and movable wooden crates, the simple and interchangeable set underlines the mood and cements the story in its era. With the chorus all playing different freaks from the sideshow, costume design is a pivotal part of this production and unfortunately the end result is fairly hit and miss. On the one hand, the different dresses and wigs produced for the twins are beautiful; however, a couple of the designs for the freaks look slightly unprofessional and cheaply created.

This production’s greatest strength is its leading actors Louise Dearman and Laura Pitt-Pulford as Daisy and Violet, who keep a story lacking in substance and depth emotionally engaging. They are a perfect pairing, and despite actually looking quite different to each other, they are more than believable as twins, portraying a sisterly connection and deepening the empathy of their difficult journey. Producing humour when necessary and having heaps of charisma, both are incredibly likable stage presences and undeniably talented performers. Pitt-Pulford in particular manages to convey so much from doing so little. Her facial expressions alone tell a whole story, bringing out her introversion and countering Dearman’s confident and aspirational Daisy.

Beyond our main protagonists there isn’t a lot else to engage with. The supporting cast undeniably give a lot of gusto but it is difficult to make any connection with their underdeveloped story lines. As an ensemble, the performers are a well-oiled unit and successfully deliver on Matthew Cole’s interesting and diverse choreography during the many showbiz numbers. Embracing the thrust staging, Cole’s choreography is dramatic at times and elegant at others, maintaining the overarching themes of the piece. The staging, while subtly clever at times, is less than neat during some scenes and often restrictive for certain parts of the audience.

Sideshow boasts a consistently strong score that includes some interesting instrumentation and incredibly listenable melodies. ‘You Should Be Loved’ for instance, sang blissfully by Jay Marsh, is an example of the many wonderful songs featuring in the musical. It is the two flagship numbers, ‘Who Will Love Me As I Am?’ and ‘I Will Never Leave You’, concluding the first and second acts that truly stand out, however. Both ballads are breath-taking, performed astoundingly well by Dearman and Pitt-Pulford, whose voices blend beautifully together.

This show certainly won’t be to everyone’s taste and in all honesty it took me quite a while to warm to it. If you can see past the slightly ropy plot, there is a lot of quality in this production with a talented cast and two consummate performances.