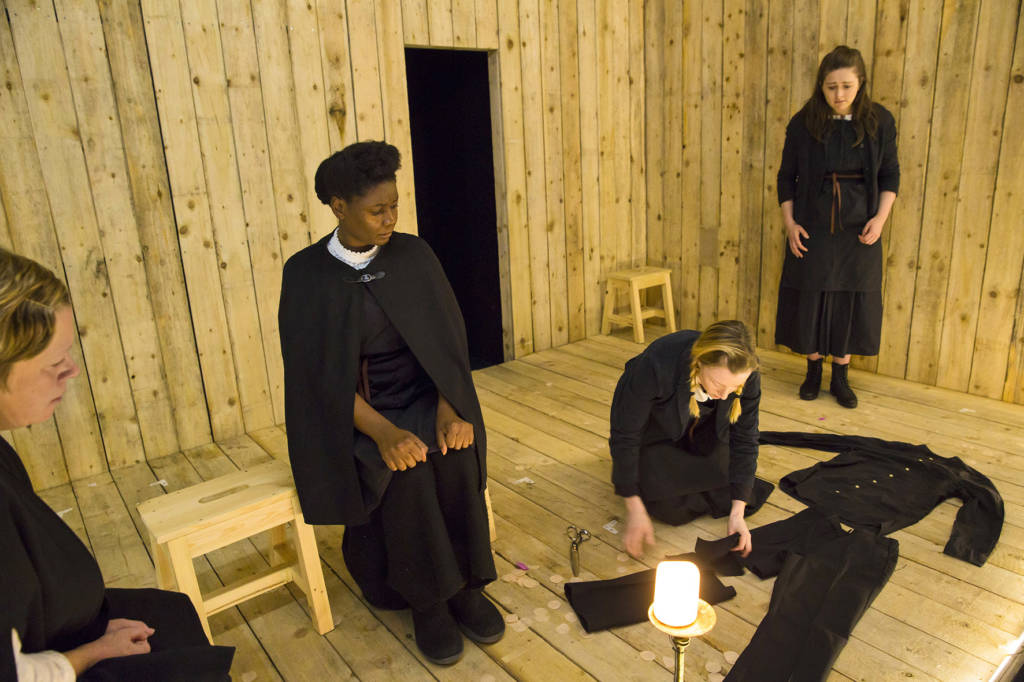 The Sewing Group at the Royal Court Theatre

The first half, and probably two-thirds, of The Sewing Group is excruciatingly oblique. It opens on two women, clad in black mantles, sitting on bare wooden stools in a bare wooden room and sewing. These people are, according to the script, A (Jane Hazelgrove) and B (Sarah Niles). They sew and continue to, but before they speak (despite appearing quite content in their wordlessness) the scene ends. We’re thrown in darkness. The harpsichordal plonkings of Christopher Shutt to bridge the silence. Then A and B are sewing again, and this a cycle that continues until F (John Mackay), a parishioner of some sort, introduces C (Fiona Glascott) who joins the group and…sews. Though she’s a bit unsure of how she got here. She doesn’t know what’s going on, like we don’t, but at least we roughly can judge where the scene set: Possbily an agrarian community of some 17th-, 18th-century denomination, although the only thing really we know for certain is that there are three women, sewing, in an exceedingly modest room.

They talk, in terse tones, with registers that sound quite off—or if they’re on, they’re on in the keys of Beckett and Pinter. A and B offer technical advice to C, yet also make ominous declarations and cut through the subtext by explaining the stakes of the situation in offbeat condescension. After about twenty cycles of the vignette format with the silences and the harpsichord, D (Alison O’Donnell) joins the group but her presence sheds no further light.

D enters probably thirty minutes in. At this moment, any reasonable audience member would boil red-hot with indignation. There’s no explanation of the purpose of the sewing—yes, to make designs on lace, but the characters don’t have any goals beyond this fact. We don’t have any sense on why they really need to do this or even who they are. That’s the point, however. The search for an overall purpose is the absolute purpose of The Sewing Group.

A plot groggily wakens as C takes control of the group, pushing for more elaborate and more meaningful embroidery, and this escalates, to the extent that she organises an exhibition of quilts made from old clothing (‘escalates’ is relative here, clearly). The odd language, in which anachronisms like ‘gluten-free’ and ‘Oxbirdge’ surface, persists through C’s domination of the group until she, unbridled, starts to swear in a 21st-century manner, using that glorious kenning ‘motherfucker’ as an insult. The ball then drops.

Suddenly, and this is the Big Spoiler of the show, we’re let on to the artifice. There were indications before this reveal, particularly with the way, similar to how the Royal Court did the set of Posh, that the wooden room of the set exists as a box in the middle of the Jerwood Upstairs with the modern day, decidedly un-18th century surroundings exposed to us. The title too, The Sewing Group, suggests a voluntary pastime which doesn’t square well with the rigours of pre-industrial subsistence. Nevertheless, the twist is a shock.

C, aka Maggie, is an employee of a cyber security firm who have paid for her to undergo a quasi-therapy session based on her personal troubles. The therapy consists in the improv’d replica of a pre-modern era; for Maggie, this means the 1700s and so therapeutically the benefits come from the lack of technological trappings which people in this not-so-distant-future-which-is-really-the-present rely on; as soon as the simulation is over (though note: the simulation is entirely conducted by people and ‘natural’ objects), Maggie asks for someone’s phone so she can call her kids.

Two things this reveal says. One is the obvious Luddite point that we need to respect and return to rustic pre-industrial life. That’s boring: we’ve seen this done equally boringly in shows like Black Mirror and that technophobia also teeters precipitously on a cliff-edge with reactionary rhetoric at its foot (Make life great again, ‘Make America Great Again’ and so on). No, writer E V Crowe, who’s absolutely convinced me to read more of her work now, pits audience frustration against itself in a turn smarter than Suzan Lori-Parks’ work which featured at the RC a few months ago. The point of the sewing group and the bizarre service that Maggie’s company is paying for is to allow people to be reinvigorated by the doing of something for the sake of it—which is paradoxical, obviously, and I’ll talk about this in a tick, but there’s an intelligence here that shouldn’t be glossed over. Maggie is a high-powered utilitarian to the point of neurosis: she can’t even play her role in a production manufactured for her because she’s so disposed to expand and analyse her surroundings. Being an analyst, she tries to glean information about A, B, D, E and F through their respective quilt-making capabilities; she wants information to use it to further her career and this career is in service of the—supposedly, but we all know what can lie underneath it—moral cause of anti-terrorism. It has become her nature to seek an economic and moral purpose to things (and how compatible those purposes are is a discussion for a later play). To combat this, Maggie is forced to do something for its own sake: weaving patterns into lace has no direct moral or economic function in this imagined, pre-capitalist and insular society. But she can’t have full immersion in something for no material end and that’s why, and this revelation happened for me ex post facto: we are Maggie.

Dun dun dun—seriously, of course we’re frustrated by most of the play. Watching something that refuses to be pulled out of its own context and justify its own ticket price is maddening. There could have been comment on the role of women in the fact that the sewers work to beautify rather than change, but the absent context makes sure there’s no quick reading like this. It is just what it is and that perturbs us. Each harpsichord-silence interstitial, instead of giving pause like pauses often do, elicits excited bemusement (not amusement) from the audience, and I think people in the row behind me were right to murmur like they did. Watching this structural first half is like Maggie’s sewing. It’s purposeless and that forms the overarching tension of the play: whether we need a purpose—moral, economic or other—to satisfy the necessary condition of art. Is art really defined by being for its own sake? What is that sake? Even with the aestheticism of Oscar Wilde and a play like The Importance of Being Earnest, his work is still a comedy; eliciting laughter fulfills purposes, one of which being the moral purpose of making others happier. The sewing group is different. It defies utilitarian calculation (incidentally: 18th century? Bentham?) and doesn’t impose a reactionary, mystical answer but instead enlivens you to the challenge of it. That itself is the exuberance of the play, just like the aim of the rural therapy for Maggie.

Still, to make a play bare is to chuck out its pathos and since Maggie isn’t emotionally grounded in the play, or anyone, it means that the heartstring clawback at the end where she desperate phones her estranged children has no resonance. The constant telegraphing that Maggie is a 21st century businesswoman after the twist is also piled on. It’s a surprisingly clinical affair and for that reason does not invite a second viewing.

Regardless, it does invite a first. E V Crowe is a raffish orchestrator of audience-based abuse and maybe, in the most perverse of ways, The Sewing Group is entirely what we deserve.

The Sewing Group plays until 23 Dec at the Royal Court Upstairs.