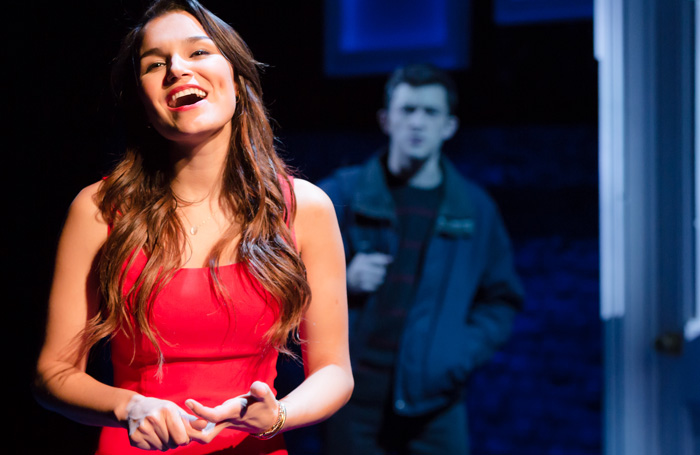 The Last Five Years at the St. James Theatre

A solid revival of a fringe theatre classic, this latest production of The Last Five Years embraces the personal lyrics and blissful melodies and provides a raw and touching take of a modern love story.

A semi-autobiographical piece from Jason Robert Brown, this sung-through musical tracks the relationship between a young aspiring actress, Cathy, and her successful writer partner, Jamie, over a five year period. The twist in its telling is that whilst Jamie’s story is narrated chronologically, Cathy’s is told in the reverse, starting at the end of their failed romance and ending at the fresh and exciting beginning. This unique technique really heightens the emotion as you simultaneously witness the two characters’ contrasting feelings at different time periods.

Despite the St James Theatre boasting one of the larger Off-West End stages, arguably unnecessary for a show featuring a cast of two, the piece, through Brown’s own direction, never feels sparse but is creatively used to set different places in the fast moving narrative. Derek McLane’s set design is quirky yet modest with almost cartoon-like apartment windows providing the main centrepiece and various set pieces sliding smoothly off and on stage when required. The props and set don’t intrude on the action but rather minimally reference the place of each scene. The television screens, while in most cases adding something extra, occasionally distract from the drama. The band are prominently placed on a raised platform which is a nice gesture given the importance of music in the way this story is told.

Storytelling seems to be an important focal point of the show and while some moments feel incredibly real and naturalistic, it is not afraid to break the fourth wall or take a slightly more theatrical approach in the direction. This is clearly a very personal piece for Robert Brown and with the writer himself at the directing helm it is not surprising that this production is able to extract every ounce of emotion from the text. While arguably not pushing the boundaries too much, the direction does include some nice touches and uses the musical’s structure to great effect in contrasting the two different paths.

Samantha Barks and Jonathan Bailey put in smashing performances, providing some show-stopping numbers and, while occasionally it seems belting an impressive note takes precedence over characterisation, it is unquestionable that these are two very talented West End stars. Both present fun and enjoyable characters that are instantly lovable during lighter moments. Baily’s charming, bordering cocky, mannerisms are instantly forgivable and Bark’s repeatedly gets laughs from sarcastic facial expressions and self-deprecation, particularly during ‘Summer in Ohio’.

The piece in general is consistently funny and the actors make the most of every line available to them. This makes the shift to more depressing moments even more jarring and uncomfortable to watch, particularly as these are both characters that you like and route for. Baily’s unbearably cutting ‘If I Didn’t Believe In You’ meandering into the upbeat and magnificently performed ‘I Can Do Better Than That’ notably sticks as a knife-twisting moment. Alternating songs, the actors perform alone but as if the other was on stage and only interact during one number, which is enough for them to make their loving relationship believable and again make the demise of the marriage all the more difficult to endure.

This production ticks all the boxes: personal performances from incredibly talented actors, stylish set design, subtly smart direction, and while there may have been room for it to be a little more audacious, overall it is a great revival of a wonderful musical that boasts one of the best scores of the new musical theatre era.