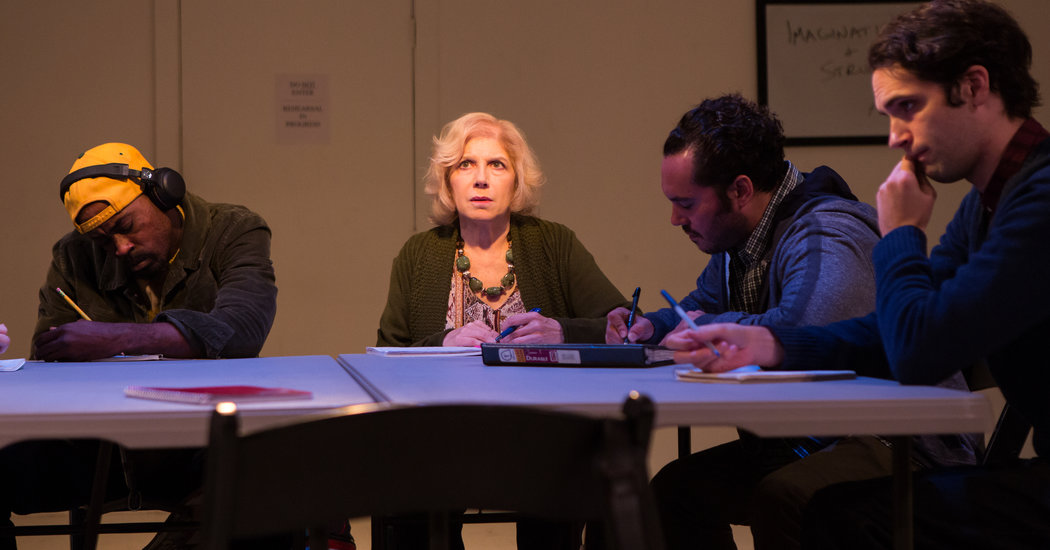 In the Room: Unraveling the Unresolved

In the Room, a new play at showing at Alchemical Theater Laboratory, written by Lawrence Dial and directed by Adam Knight, aims to expose the uncomfortable and unresolved. This play takes place over several successive weeks of a writing workshop for aspiring playwrights. As the weeks progress, the six aspiring writers and their teacher reveal their selves through snippets of draft plays, and their interactions during class.

A low-lit, starkly bare white, multi-purpose room acts as both the stage and the seating for the audience. This minimalistic set strikingly complements the dynamics of the underlying play. The seven characters sit around two cheap granite-white plastic folding tables surrounded on three sides by the audience members. The actors have nowhere to hide, with no windows to longingly stare out of and no stage right to make a hasty retreat. It is a party where the audience is privy to every conversation and even the subtlest movement can be easily scrutinized. Secrets don’t stay secret for long in this space.

Anyone who has taken a creative writing class will immediately recognize the uncomfortable experience portrayed in this play where a student presents his or her work to the class, and quietly listens as others around the table critique and deconstruct the work. When one is in the hot seat, it is impossible not to take comments personally. A writing teacher of mine once remarked that the proper way to absorb such critiques is to write them down, run home, wait a day, and drink some wine before considering making changes. However, the actors in In the Room don’t have the time to calmly reflect. The quick pace of the play and instantaneous feedback from the other students unfolds in real time forcing the authors to confront the flaws in their plays (and themselves). This is where playwright Lawrence Dial finds his most dramatic and humorous moments. The snippets of plays that the characters bring to class are all thinly veiled stories of their own unresolved issues and, as a result, the plays are extensions of the student authors. To these student authors, criticisms or simple musings are taken personally, and they begin to use the feedback to question their own motivations. In a world of social norms that obscures truth behind politeness and euphemisms, where else can an author get some real honest brutal feedback?

The seven characters are all strong actors and fiercely unique, each with his or her own unresolved problems. The standout of the show is Rainer (Suzy Jane Hunt) who has run away from her seemingly luxurious life to take this class to reconnect with the teacher, Seymour (Matt Harrington). Seymour and Rainer of course have a history that resurfaces and comes to an especially powerful climax as they discuss how the classroom where the writing class takes place was converted from a theater that housed one of Seymour’s earlier plays.

The main storyline between Rainer and Seymour often takes a backseat to the unique relationships and stories that develop among the students. Herman (Reuben Barsky) is a convincing jaded video gamer misanthrope, who, when asked if he received a rejection notice, dryly responds, “you’re going to have to be more specific.” As he develops a relationship with Lydia (Chelsea Melone), their turmoil inevitably ends up on the pages of their plays. Jessie (Robert Karma Robinson) builds an unlikely friendship with the elderly Clementine (Susan Neuffer) as they confide in each other. And the naïve small town New York transplant (Jacob Perkins) steals a scene near the end of the play as he begins to find his voice.

The play, at times, verges on soap opera storylines (after two characters have a teary and heated exchange, they need to leave the room so the next two characters can have their own emotional fracas). There’s a lot more sex, drama, deception and intrigue than one would expect from a single writing class resulting in profound changes for every character. There are a few other oddities, including intense lighting between scenes, and the decision to have the characters loudly march in and out of the room to signify the passage of time. But those moments are easily forgiven because of the humor, richness of the acting, and immersive experience of this play.