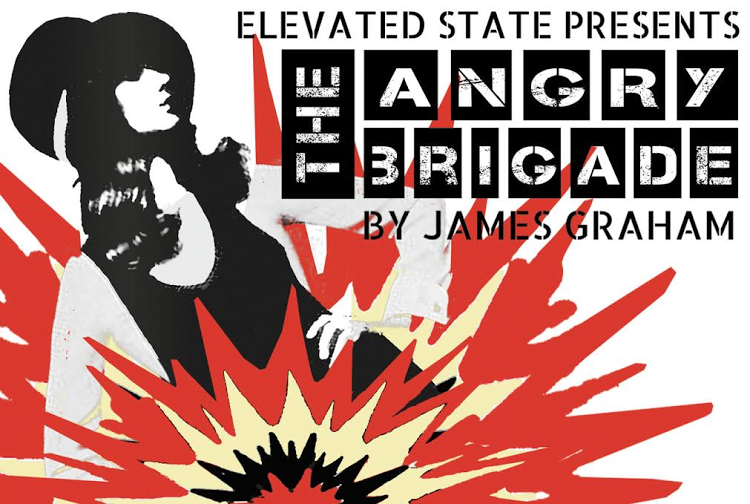 The Angry Brigade by James Graham takes place in 1970s London, and as I walk into the theatre, I’m wondering what it might have to say to us in our current political climate. The stage floor is painted with a Union Jack: a colourful and intense symbol, and one which evokes a history of colonialism, violence, and political power. The play opens with The Commander informing Officer Smith of a group of youthful revolutionaries plotting somewhere in London. Smith is put in charge of heading up a team of awkward and repressed police officers who at times seem barely able to take the initiative to answer a telephone. Under the guidance of Smith, they begin to make headway, progress that is moved along when Smith starts getting mysterious phone calls from a nameless woman who taunts him.

Act Two shows us these young revolutionaries: their living conditions, their politics, and their relationships. Played by the same actors, in many ways their attitudes parallel the officers of the previous act. While Smith attempts to make his team more informal by asking them not to call him ‘sir’ and asking them to relax their body language and clothing, in the second half Anna calls for them to ‘break down all the walls’ of the house they are renting – an attempt to bring the political into the personal that eventually bleeds into their alternative relationships in which they refuse to be ‘claimed’ or ‘owned’ by each other.

The cast consists of four actors: Matt Dawson, Cameron Sedgwick, Lauren Saunders and Andrea Creighton, who play the officers and the youths, as well as several characters interrogated by the police. The accents range between adequate and excellent, and even the shakier moments are still good enough not to be distracting from the story.

Overall the acting is strong, and the cast dynamic is excellent, which is good, not least because they need to get pretty intimate with each other on stage, both physically and emotionally. The play hits a few different notes, calling for both sincerity and a few different kinds of comedy, and this production achieves a nice balance of both. In particular, Andrea Creighton stands out to me with her depth and sincerity, especially as the character of Anna, one of the youths from the second half. Despite her political convictions, she grapples with unresolved emotions from her childhood, and her desire for real intimacy and commitment. The trouble with radical non-monogamy, it turns out, is that we live in a world in which people actually really need to count on each other, and desire a more consistent connection than one’s radical politics and wall smashing might allow. Her frustration with her sometimes-partner Jim is heartbreaking, and her desire for connection, though it leads her to illicit phone calls to Smith, is understandable.

The two halves actually begin mirror each other towards the end: the rigid order that rules the first half begins to descend into anarchy as they get closer to discovering the revolutionaries, and as the lifestyle of the youth gets more and more chaotic, Anna pulls back towards structure and stability. I still wonder what this play is saying about politics, if the possibility of real change is a fantasy of the youth, that systems will move instead towards some kind of equilibrium, or if this play is instead giving us a picture of the ways in which individuals are precisely not homogenous or predictable, that people are capable of change, sometimes in deeply unexpected ways. After days of reflection I’m still not sure what the answer is, either within the play or real life, and for that reason this play is a welcome contribution to the current political conversations that need to happen.