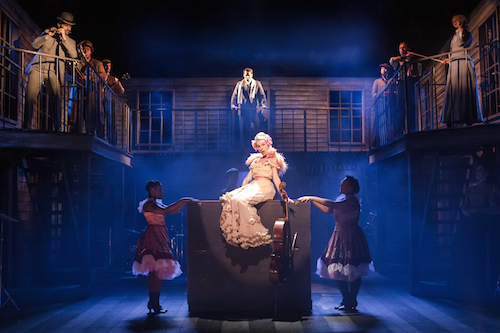 Ragtime at the Charing Cross Theatre

A powerful and poignant musical production from director Thom Southerland, who yet again manages to deliver an incredibly high calibre of fringe theatre. Ragtime boasts an accomplished score, intriguing story and cast and creatives who more than equal the quality of the source material.

Tom Rogers and Toots Bucher’s set design is instantly striking, particularly from the front few rows of the stalls, bearing down on the audience and feeling particularly intrusive in the small theatre. It perfectly captures turn-of-the-century industrial America, and its subtle alterations allow the stage to feel both busy yet not cluttered and isolated yet not sparse. Adding in Howard Hudson’s smart lighting design, we are presented with spectacle to behold before the action even begins.

Ragtime takes a number of initially separate stories and subtly interweaves them, developing old, and creating new, relationships between characters from different cultures and backgrounds. Despite its early 1900s setting, the themes of race, gender, inequality and family seem very relevant and relatable today and Terrence McNally is not afraid to include controversy in the emotional tales that his book unravels. The show couples its fictional lead protagonists—Mother, an upper-middle class woman living in suburbia, Coalhouse Porter, a black musician from Harlem, and Tateh, a Latvian immigrant—with cameo roles from real historical characters such as Houdini and JP Morgan, who plant the story in its setting but also metaphorically represent the various themes the musical explores.

The show moves at a snappy pace with the various storylines effortlessly meandering into and around each other and different characters taking prominence at different times. There is an abundance of good performances in this production with each cast member portraying feeling and intensity regardless of relative character size or development. Gary Tushaw’s depiction of Tateh’s rags-to-riches tale is heart-breaking and inspiring and the relationship with his daughter, played by the hugely talented young actress Alana Hinge, is a joy to watch. Ako Mitchell emits so much passion in his role that every audience member remains gripped to his troubled story. The tone of his soulful voice is utterly wonderful as he effortlessly performs breath-taking solos and blends perfectly with Jennifer Saayeng during a beautiful rendition of ‘The Wheels of a Dream’.

The score’s many show-stopping numbers are shared pretty evenly around the cast, with notable nods to Anita Louise Combe’s take of the beautiful ballad “Back to Before”, Jonathan Stewart’s ‘The Night That Goldman Spoke’ and Seyi Omooba’s solo during “Till We Reach That Day”, which is something truly special. As an ensemble, the singing is also of a particularly high standard with numerous awe-inspiring chorus numbers.

An extra element that really adds to the success of this show is that rather than a traditional orchestra, the band consists of actor musicians, all of whom are on stage for virtually the whole show. While not a particularly uncommon feature of musical theatre, there are few shows that are better suited than this for the characters to play instruments. Not only do the instruments look appropriate onstage, they are also cleverly incorporated into the choreography and even the personality of the characters—Jonana Hickman for instance, as Evelyn Nesbit, adds a whole new component to ‘The Crime Of The Century’ by incorporating her cello playing into the number. The centrepiece of the set is two upright pianos that are constantly being moved around the stage to create different images and scenes. Onstage musical director Jordan Li Smith, also playing the Piano 1 part, does a fantastic job of organising his singers and musicians who jointly produce a pleasant and at times tremendous sound. Occasionally the mixing is a little off, but given the incredibly challenging scenario of musicians onstage going from moving and singing simultaneously to playing their instruments, the sound team should be commended.

In my review of Titanic earlier this year, I described Thom Southerland as “one of the most exciting and talented musical theatre directors around” and Ragtime stands as further evidence of this sentiment. I have long been a fan of Southerland’s work and once again he adds fresh and new ideas into a critically acclaimed, yet lesser known, musical. He manages to produce deep, meaningful relationships through his actors and depicts iconic and powerful tableaux scene after scene, encapsulating every element of a story or a conversation with a perfect balance between subtlety and drama in order to create something that feels real and gripping.

Ragtime is a very smartly written show telling a fascinating story, accompanied by a lovely score, and this latest London production at the Charing Cross Theatre is blessed with a cast, creative team and crew who are all working at the absolute top of their game to produce a spectacular piece of musical theatre.