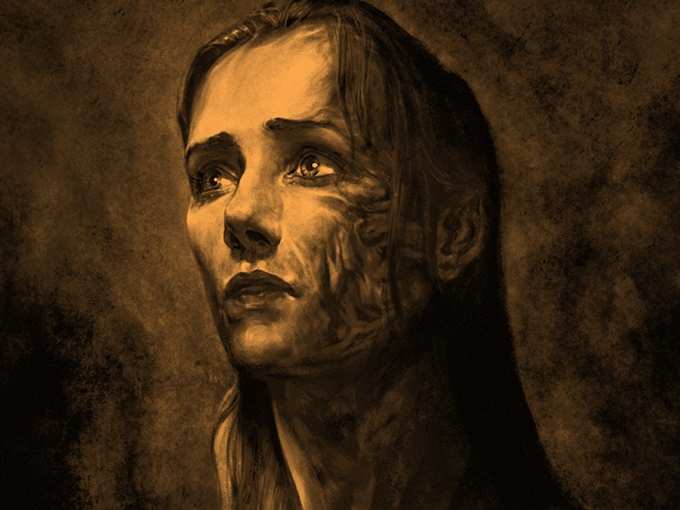 No’s Knife at the Old Vic

In one sense, it’s the ultimate indulgence to a craving no-one asked for. I don’t mean “ban experiment; bring on the potboilers”, I mean that this production feels irrelevant, and that irrelevance is compounded by the awkward pose of its prose.

No’s Knife is an adaptation of Samuel Beckett’s obscure mini-tales, Texts for Nothing, and this Old Vic performance is the first time they’ve been dramatised (ooh, novelty). 13 minisodes into four connected-unconnected monologues, performed by the eminent antiquarian Lisa Dwan who’s able to run the show on the back of plaudits for her 2013 aria of the Not I trilogy.

It opens with projection: a massive eye on a massive curtain—possibly referencing the tiny Not I mouth—which gives way to footage of a fetally-curled Dwan biding underwater. The curtain then drops and it’s her, in a slip with muddied and gashed legs, wedged into a cliff cleft like a vein of ore. Her character speaks of her death-state: that bizarre hinterland which is the passing between life and non-life. In doing so, she adopts a startling range of voice and grittiness to invoke the people who have entered and left her time on earth. Then blackness. Then she’s in a bog doing much the same as before save for more gesticulation. Then she’s suspended on a chair-swing resembling a Francis Bacon portrait box. And then, finally, she’s back to the bog, working the nerve to come downstage into full relief.

My description of the action doesn’t come close to capturing how elliptical No’s Knife‘s language is. The play is fits and starts, multiple voices and digression upon digression. In prose, fine: you have the time to parse and reflect on it. Though no time for this with Dwan, so lauded for her speedy delivery.

It’s impossible to take it all in. Which can be fine, as in the context of the fleeting supertitles in a foreign play, but this is different. This difficulty opens up a gaping flaw of the production. It’s not even the voice of the prose itself—I’d be the first to call out Beckett because it is rankling how utterly unassailable he is re criticism. I would like to tear into him, but I can’t, because I couldn’t process enough language in this work to actually criticise. The previous success, Not I, is fast, but Beckett designed it that way. The unintelligibility provides its own spectral intelligibility in that piece. And sure, that warrants investigation into how effective it really is; however, Texts for Nothing is definitively prose, not theatre. It doesn’t work as theatre, at least not without the major editing it never received.

Beckett called TfN the afterbirth of his novel Trilogy—Molloy, Malone Dies, The Unnamable—which when namechecked in No’s Knife received a smarmy ‘hmpf’ from the row behind me. They feature a rapid, diversionary voice intimate with death in some form. Their narrator is primarily an observer and raconteur, whose musings are interrupted by the violent representations of people from their life. No’s Knife consists in that same register. Dwan will jump from a recondite yet hopelessly general comment on mortality to the voice of a grandmother, and then to another, and then back to the soliloquising. It’s such a barrage of image and thought that in textual form your own pace is the key to getting it. Its problem on stage is twofold: it’s recondite but, also, Joe Murphy’s direction (and by extension Christopher Oram’s set and Hugh Vanstone’s lighting) doesn’t create strong enough stage images to shape the Delphic patter. Beckett’s theatre is special for its image, like the hangman’s tree and hobos, the holidaymaker buried neck-deep and the infirm master and equally infirm manservant. His masterpieces squeeze the general through the specifics of performance; No’s Knife is general through further generality.

There’s an attempt to wrong-foot critics in the production’s programme regarding this, and it’s probably unnecessary given the idea’s pervasiveness. With obscurer, uncovered Beckett, you’re not customarily allowed to criticise it and the reason is this: every description of his work talks about paradox, like the way all Pinter copy uses ‘menace’. I’ll quote the programme: “Is there life after death? In Beckett, there is no other kind of life”. Go read other, far more studious critics than me. They can’t even talk about Beckett without the admittance that he’s steeped in contradiction and so are forced to talk about him circuitously. Of course, he has unique form, so the critical language has to be sui generis to an extent, but that itself opens up massive double standards. Consider what (some) commentators said about Martello-White’s Torn: they disliked the abstruse opening, yet the obscurity of Beckett which is far harder to understand is held as a plus because it “relates to existence”—even though art, a priori, has this function. The problem with imbuing something with paradox is that it means anything can be right; if 2=1 then you can reason anything to be anything else. That’s good for theatre, in a way, because representation is it’s own contradiction—an actor tries to be someone else onstage, like 2 trying to be 1—but when all theatre critics cannot amass a vocabulary to attack this world of paradox and instead turn wilfully evasive, their presence becomes a cultural dead weight.

Basically, I think the advocates of this production like it because it looks like a Serious West End Play but actually, the project of putting the prose onstage is fundamentally misguided, or at least in need of far more dramaturgy. I like Beckett’s trilogy of novels. They work for the exact reasons described above. They rip apart your readerly sensibilities just enough for you to embrace the paradox (God, that sounds evasive in itself). No’s Knife conversely doesn’t work on stage and it’s barely theatre despite Dwan’s unblemished delivery.

You may have detected a contempt for parts of the audience in this production thus far, and you’d partially be right. I think there’s self-delusion present, and its using the guise of progressiveness to mask a conservative nature. Warchus says in his foreword that the Old Vic has a “newer approach of trying to present a much wider range of work, for a much wider range of audiences”. But No’s Knife audience was white middle-class to a man. He also says that, among other sources, the theatre’s “corporate sponsors…allow us to have a spirit of adventure and not always play safe”. Hmm. Not playing safe seems to mean not stunt casting and not hiring Tim Minchin.

The problem with Beckett conceived in this way, with such cavernous direction, is that you can rob him of all moral content. No’s Knife, judging by reviews and programme notes, might as well be a self-help guide what with its vague examination of life and interspersed quote-unquote humour. An intellectual sugar pill to be co-opted for anything whatsoever. Offensively, the programme asserts how innately connected the words of Texts for Nothing are to the modern-day Refugee Crisis, implying similarity between stateless post-war Jews and stateless intra-war Arabs and others of today. Except the production doesn’t do anything to reference this, or do anything extra to signify it, like Benedict Cumberbatch appealing for donations post-curtain call. Such an empty gesture on the part of the creative team is borderline maddening.

Dwan is a great performer. No’s Knife is, however, misbegotten and shouldn’t advertising the idea that it is boundary-pushing. Because it isn’t.