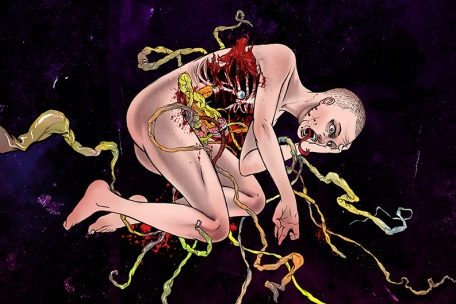 Kissing the Shotgun Goodnight at the Ovalhouse

The opening monologue, performed off-stage and possibly prerecorded, brews the promise of a ‘neo-noir fever dream’ into a disgustingly tactical succession of phrase.

Its programme says the show ‘changed from a fiction wrapped in a concert to a concert sprinkled with words.’ That’s true. There are now only two worded segments among a relentless soundscape, one that offends aural propriety by going into realms of 120db. That’s tinnitus-level sound, so everyone’s given earplugs prior.

And I used them a little.

On the words: the first bit is surely noir but suffused with industrial and diabolical and purgatorial imagery which presages the incoming music. “This is a hell dream. This is a hell dream.” This monologue is more edgy than on edge though monologue #2 is exactly on-mark: horrible and dream-like. CBB depicts a dysfunctioning idyllic afterlife in the mind of someone willing to die. All metaphor is tuned imprecisely so the static of other images invades, turning a “white brick” into sperm turning into gallstones. The texture of the language throws you off but dials you in. I feel dumb for missing his last show This Is How We Die, apparently replete with this uncanny, brilliant poetry.

However, it’s not words defining Kissing the Shotgun Goodnight, it’s the collaboration of CBB, Alicia Jane Turner and George Percy who handle a violin, guitars, and piano corpses, and in order to get the big noise push all their input through a welter of amps, pedals, loops and electrical whatnots exposed onstage. Their product is Post-Rock, it’s Industrial, it’s Drone. All of these genres and you pick up newer sounds in the melange choked into lower-fi high-volume madness.

Is it madness? Is the music conjuring a hell dream? It’d reduce the aural to a crude desperately incomplete realisation of suicidal subjectiveness if it was. I prefer to think of it as tapping into anxiety for this reason: the lack of clarity in the storm takes you out of a concertgoer self and into something darker. None of it is pleasure-listening.

Oh yeah, piano corpses. Watch the production’s trailer and you’ll see a piano being smashed with hammers. Behind each performer is the innards of three, fixed vertically onto a wall like a slice of garbage cube. The reconfigured instruments aren’t necessarily in-tune but still make noise. Their use evokes field recordings from the percussive hits on the non-stringed parts and their tri-partite sound is mesmeric (though they occasionally slip into the harpsichordal plonkings of the Guy Ritchie Sherlock Holmes soundtrack).

Mostly music begs the question of it still remaining theatre. The piece was once 100 minutes and last-minute changed to 70, so presumably words got cut. It’s hard to tell in this iteration how dramaturg Anne Rieger manifests since there’s not (apparently) much attention given to how the performers operate in the space—they mostly work still or else fiddle the nobs of their looping pedals. I wonder what the dead words did. They may have been key because the music often drones (lowercase) and the words become a respite in response.

I don’t have the sensibility to break down the messy audio of Kissing the Shotgun Goodnight, but that is okay. I was sold on a different show. This new one is hard to enter yet I respect the alterations if what came before was ‘fake stuff’. But, save for sometime words, I don’t believe it’s theatre. It’s not gig-theatre either. It’s a gig and rarefied for that reason, too far out of my literary-mindedness to access though puncturing with its odd speech.