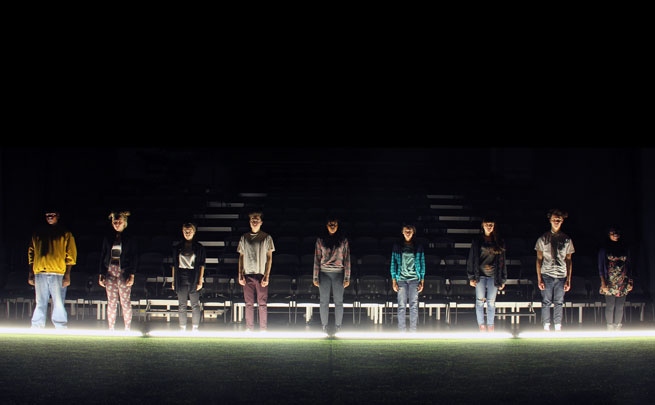 Written by Jordan Tannahill, directed by Eric Brubacher and Cara Spooner, Concord Floral is currently opening Canadian Stage’s 2016-2017 season. To top it all off, just a few days ago, the play earned Tannahill a nomination for a Governor General’s Award.

The play centres around Concord Floral, an old abandoned greenhouse in Vaughn nesting within an uncultivated field. The field is frequented by the teenagers of the suburb- a space that is sometime a means to an end, like when they use it as a shortcut to McDonalds (McFlurries wait for no one!) or an end in itself when they use it to carve out a space away from the judging eyes of parents and neighbours. One day, two girls wander into the broken down greenhouse, and one drops her phone down a well. In their attempt to retrieve the phone, the girls spot a dead body covered in twigs and leaves. The story that ensues is one in which one of the teens is haunted by her ghost. Running from her guilt forces a kind of reckoning within her, and amongst the teenagers of the neighbourhood.

The core idea of the story is excellent, and very relatable. I overheard people milling around talking about similar childhood experiences after the show was over and I remember my own, which was essentially as an observer of a girl getting bullied at my school. Are those of us who observed but didn’t intervene (mostly due to fear of being targeted ourselves) also complicit? The theme translates easily to larger problems of oppression, to those our society targets, and how those of us who witness but refuse to act are complicit in perpetuating that oppression, regardless of our intentions, or our fears.

Yet the execution of the play itself doesn’t quite match the strength of the narrative, which is odd considering the show has been around for about three years, workshopped and produced and polished. It’s a play written about teenagers but seems targeted at an older audience with lots of self-conscious jokes about social media and sex that teenagers themselves probably wouldn’t actually make, cheapening the story a bit, and distracting from what might have been a deeper, more organic humour arising from the characters themselves. The show might also benefit a lot from a movement coach, to help the cast relax into their characters a bit more, which in turn might help it feel more natural and less like they are performing teenage-dom.

The cast works well together as a unit, some excellent lighting effects help to punctuate the story, and the direction brings out the fluctuation in mood- from teenage social awkwardness and anxiety, to the creepy feel of the abandoned greenhouse space, to the social and existential panic that starts to affect the teenagers throughout the play. With further development, this piece has the potential to be incredibly powerful but, despite all its praise and awards, it’s not quite there yet.