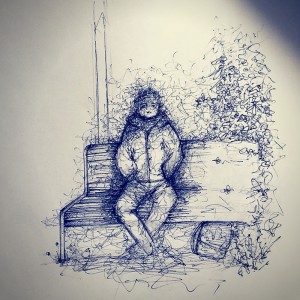 Choosers at the Etcetera Theatre

If there is one subject that makes most people uncomfortable, it is that of homelessness. Rare are those who stop and speak to homeless men and women on the street, let alone go see a play about it. Although it may feel uneasy at first, Cuckoo Bang’s Choosers, written by Holly Mallett, does an excellent job at portraying an issue that is too often unmentioned in society. Do people choose to be homeless? How do they get so desperate to end up in that kind of life? Is it temporary? These are all questions that fill the audience’s mind during the performance.

Chris Mayo plays Alfie, a lost nineteen-year-old boy who has decided to leave his life behind. Reg, played by Simon Balcon, has lived in a park for 7 years. Both are complete opposites but learn to tolerate each other and learn a lot from this time in their lives. Alfie can be a little bit annoying at times, speaking quickly and awkwardly, though in a way this adds to his charm, making him lovable in the end. Reg, on the other hand, is a more difficult character. It seems that the writer plays on stereotypes here, with the young boy being funny and talkative and the homeless man grumpy and reserved. This is probably done to portray reality but it needs to be said that the plot is not as inventive as it could be. This does not take away from the quality of the performance, but it shows that this play is written to send a social message more than anything else. It succeeds beautifully in doing so yet its form is wanting. The end leaves everyone wishing more could be said and whether that is good or bad is not clear.

The set is simple. There is a park bench and leaves hanging from the ceiling to illustrate the location. The minimalist choice has practical purpose but is also a way to keep with the general theme of the play. Homeless people do not own much, if anything, and therefore it would be absurd for the set design to be over the top with props.

Choosers is short, entertaining and forces audiences to think about respect, happiness and home in a creative way.