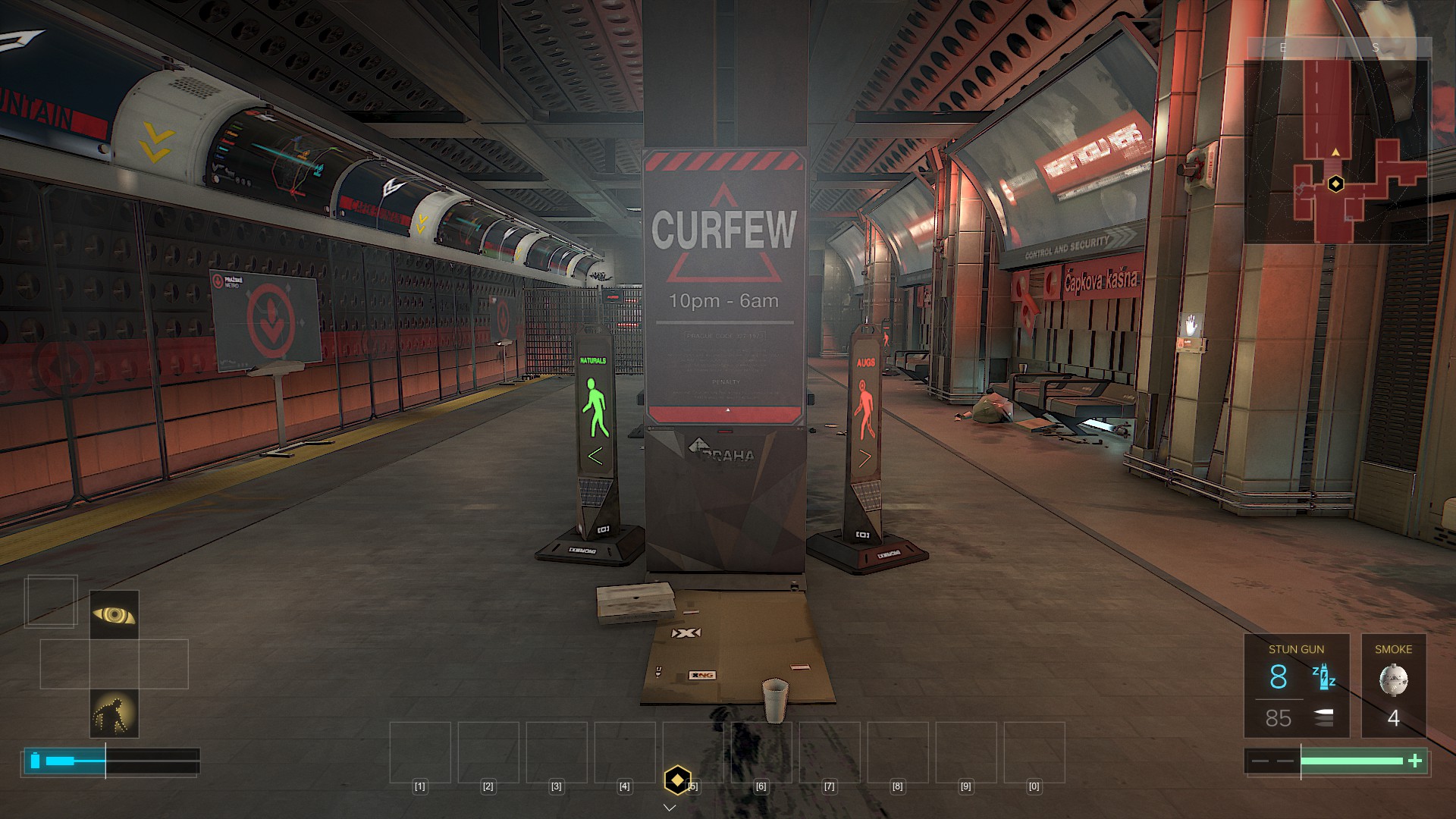 Further musings on Deus Ex and the different approaches to player choice. Also, I started playing World of Warcraft again because I guess I’m made of money and free time?

Deus Ex: Mankind Divided
I finished what I’ve been calling Act Two in DXMD this weekend and have some amendments to make to my points last week. I still think the cutscenes are boring and the characters laughably broad, but more of the story has taken shape and I’m intrigued by where it is going.

I found out those unskippable moments where the police check your ID are skippable, you just have to bend to The Man to skip them. The are two paths to descend into the subway: one labelled with a green ‘naturals’ sign and the other covered in razorwire and marked as being for ‘augs.’ I had always taken the path for naturals, mostly because it exits out the right side which is how the subway works in Toronto. I was getting harassed by the cops because here I was, a clearly augmented person, using the side reserved for ‘naturals.’ If you bow to the law and use the ‘aug’ path, the cops treat you to nothing more than a derisive comment. The subway itself is used as a loading screen separating the different parts of the overworld and you can board the train wherever you wish, but I had always chosen the ‘front’ of the train which is cordoned off for ‘augs.’ Apparently you can board the train anywhere you wish, but the cutscene that plays if you board the car reserved for ‘naturals’ has non-augmented humans giving you suspicious glances the whole time. I’m a big fan of this kind of detail-oriented, player-driven storytelling. These choices add nothing to the plot of the game but further drive home the atmosphere the story is taking place in. They also allow you to shape your Adam Jensen a bit. I like that, at first, my Adam Jensen went through the ‘naturals’ gate, even though it was a pain in the ass, because it spoke to the rebellious side of his attitude. Now, ten or so hours into the game, it’s not worth the headache to go through the checkpoint. I think it’s pretty cool how the game subtly shows you the power of institutionalized segregation without making a big deal out of moments like this.

It reminds me Splinter Cell: Chaos Theory, which had an early and totally missable opportunity to flesh out Sam Fisher’s character: upon discovering the hanging corpse of a fellow agent, Sam is told by his boss to leave the body and move on. The player is given a prompt to cut the body down and gently lay him on the floor. Your boss chastises you for this unnecessary bit of humanity, to which Sam responds “I’m not going to leave him hanging there like a piece of meat.” It’s a totally optional moment that many players probably completely blow by, but it rewards the player for their sharp eye with a pothole-deep look into Sam’s personality.

Deus Ex: Revision
DXMD sent me checking in on my nostalgia and investigating the free fan project remake of the original Deus Ex.

Revision is free on Steam if you own the original Deus Ex and it’s not just a graphical upgrade but apparently updates some of the mechanics and level design as well. I’ve only played through the first three areas and haven’t noticed anything different, but the game play isn’t what I remember about Deus Ex. The terrifically dense cyberpunk conspiracy story is all here, casting the player as a nano-augmented UN counter terrorism agent who eventually teams up with two rogue AI in a fight between the Illuminati and Majestic-12. There’s Hong Kong gangsters, hacking, a government controller superflu: it’s a playable William Gibson novel and no wonder I was obsessed with it when I was a teenager. Revision updates some of the graphics but it was never a looker. In the early 2000s the possibilities of the systems in play were so exciting and they still scratch that ‘your game, your way’ itch but the writing is really what you’re sticking around for. If you’ve never played it, you should.

World of Warcraft
The Star Wars of MMORPGs released a new expansion on Tuesday and my curiosity got the better of me. I played WoW when it first came out when the promise of running around inside Warcraft 3 was so exciting. I managed to get a hunter up past level 30 without ever grouping up with anyone which, ten years ago, was quite an achievement. WoW created or innovated on so many MMO tropes that they’ve become conventions and it’s still the standard to which all MMOs are held. That’s why you have player housing in Star Wars: The Old Republic and seasonal social events in Star Trek Online, where they’re not only irrelevant but break the immersion of the simulation.

Even if you don’t play it, WoW is pretty fascinating. Like EVE it’s almost more interesting to read about than to actually play. There have been so many expansions and changes to the base game that, jumping in a few years since I last played, I experienced something similar to culture shock. It was like walking into your parents’ house after they’ve redecorated. What’s most intriguing is the updates the team has made even to the starting areas in the light of expansions that have affected the state of the world. The game I played in the mid 2000s no longer exists. So many MMOs put too much focus on late game content and subscriber retention, churning out new high level quests and raising the level cap more and more. WoW does this too, but their commitment to welcoming new players into an ever-changing story is admirable.

The game is still colourful, wacky as hell with a visual style that’s like Pixar meets Warhammer. In an age of over-designed fantasy with huge polygon counts, it’s awesome to see what the team at Blizzard can do in translating their grade school notebook sketches into living characters.