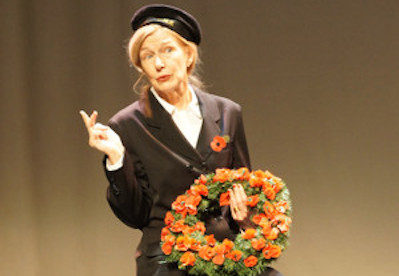 A few years ago, Bletchley Park became a minor academic obsession of mine. After discovering the code-breaking history of this British installation, I read everything about Bletchley that I could get my hands on, from books about the history of Bletchley and its hard-working inhabitants to Alan Turing’s biography and his paper on computable numbers. I even learned how to code and resolved to visit Bletchley Park when I next find myself in the U.K. So, unsurprisingly, Remembrance Day immediately piqued my interest when I scanned through the massive number of review requests in my inbox. A one-woman show, Remembrance Day is playwright June Ballinger’s ode to her mother, Nancy Ballinger, an intelligent and hard-working Wren (Women’s Royal Naval Service) at Bletchley who, after the war struggled to find purpose in the triviality of a housewife’s existence. Ballinger’s engrossing tale can feel piecemeal at times as the plot leaps through time, but, as a whole, Ballinger has crafted an intriguing and evocative narrative about her mother’s exceptional and ordinary life, constructing a vivid picture of a woman with many secrets yet to be discovered.

Through an examination of her mother’s personal affects, asking her mother questions about her youth and doing independent research about her mother’s time at Bletchley, June Ballinger has written a play that recounts her mother’s work on the Colossus decryption machine, her tragic war time romances, and her eventual move to American suburbia to live out the so-called American Dream by staying home and raising a family. In many ways, the play focuses on a life that is as unique as it is ordinary. Nancy’s top secret work at Bletchley Park carried an aura of purpose with it – it was engrained in the inhabitants of the park that they were saving lives and advancing the position of the entire British nation. Though work conditions were harsh and tedious, there was a fulfilling satisfaction, both on a patriotic and academic level, that came with decoding German communications. However, despite their dedication and the heartache that they endured as loved ones were killed during the war, many of the woman of Bletchley were thrust into domestic life following V-day. No longer praised for her intelligence or relied upon to carry out mission-essential functions for Queen and country, Nancy suffered quietly in the tedium of homemaking – a role that failed to develop her sense of self.

Ballinger’s walkabout on stage in her mother’s shoes is an emotional and touching one. At times, Remembrance Day suffers from the structure of the narrative as Ballinger leaps through time to highlight the differences between her mother’s life during and after the war. These lapses of time occasionally interrupt the flow of the show and muddle the emotional trajectory. For example, in a linear version, the audience would first be introduced to a wartime heroine working in a secretive government facility doing cutting edge cryptanalysis. After experiencing personal and professional successes, Nancy’s position at Bletchley would take a physical and emotional toll on her and society would then relegate her to domesticity, leaving her with very little sense of purpose and desperately clinging to the most important responsibility of her professional life – protecting the secrets of Bletchley (even after many of them had been revealed publicly). As currently written, however, the audience is introduced to Ballinger through a non-linear examination of both her wartime and post-wartime life, undermining the impact of her slide into an unfulfilling life.

As for June Ballinger’s performance, Remembrance Day is clearly a passion piece for her – a swan song for her mother and a vehicle for June to learn more about the aspects of her mother’s life that Nancy kept secreted away from her family for so many years. Under the creative eye of director Janice Goldberg, Ballinger shares her mother’s heart-wrenching losses with quiet resolve and palpable melancholy, and her tenacious approach to portraying her mother’s mind-numbing tasks both in the home and at Bletchley successfully conveys a sense of exhaustion to the audience. Ballinger also transitions effortlessly between the wizened version of her mother that she grew up knowing and the energetic youth that her mother once was at Bletchley.

Despite my keen interest in the subject matter, Remembrance Day has far more to offer than simply a historical recount of the exciting spy activities that took place at Bletchley. At its core, Remembrance Day explores the personal struggles that many women in post-WWII faced after social norms demanded their retreat back to the kitchen after years of contributing to the workforce. It is a play for anyone who has felt that their attempts to contribute to society have been stymied by the expectations or demands of others. In that respect, Remembrance Day is a play that many people can relate to.